Ducati Demo Day - For the Rest of Us 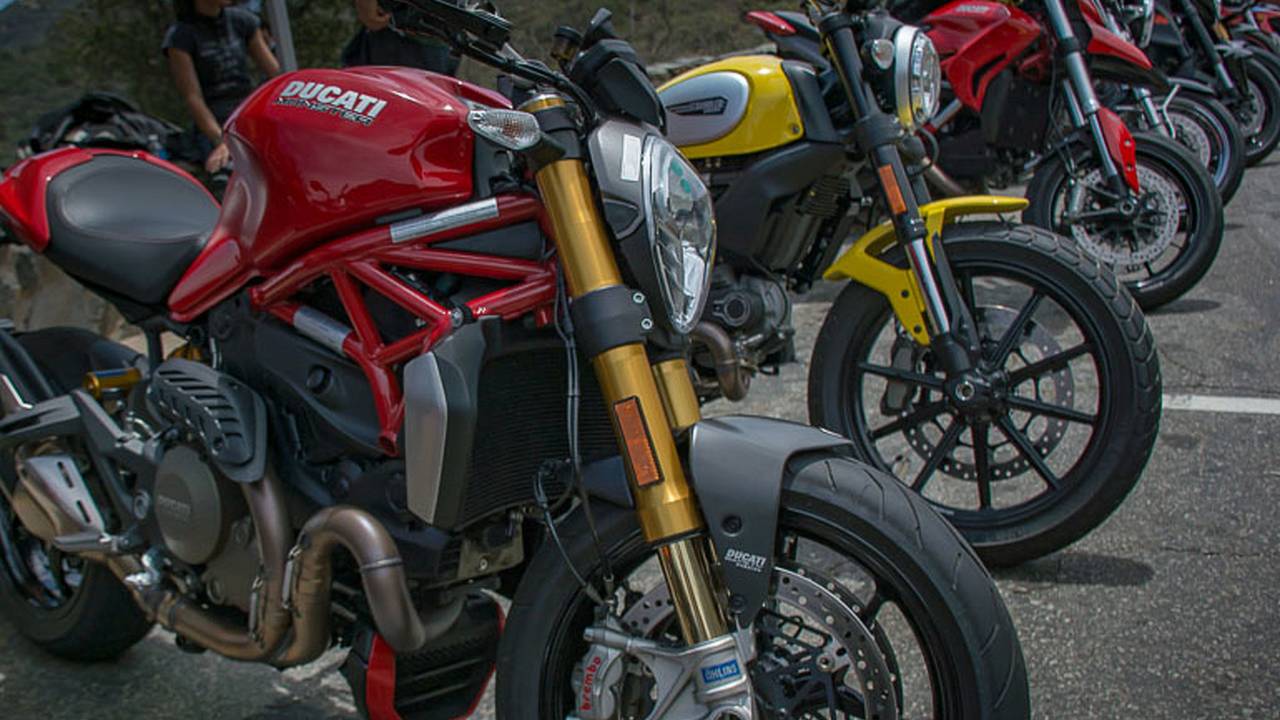 Live like a moto journalist for a day and demo all the new 2015 Ducatis thanks to Beverly Hills Ducati.

For motorcycle journalists, riding the latest dream machines is a job requirement. But for the rest of us, the chance to spend an afternoon riding a manufacturer's full 2015 offerings on some of the best motorcycle roads in the western hemisphere is little more than a fantasy. But thanks to Beverely Hills Ducati, fantasies it turns out, can come true.

Who Wants to Ride a Ducati?

In June, Beverly Hills Ducati hosted a Ducati Demo Day atop Southern California's infamous "Snake." Nestled in the Santa Monica Mountains, the 21 turns that make up the Snake's pristine asphalt are a magnet for SoCal motorcyclists of all stripes, and a perfect place to spend some time testing out Ducati's 2015 line-up. Anyone with a motorcycle class license, full insurance, and appropriate riding gear could sign-up and demo an impressive selection of brand new Ducati Motorcycles.

We couldn't think of a better way to spend a Sunday afternoon, so Stacie B. London and I rode out the top of the Snake for a day of fun on some brand new Ducatis.

First on the menu was the Scrambler. The variant available to us unwashed masses to ride was a bright yellow "Icon."  Many great things have been written about the Scramble from Ducati, so we were eager to take it for a spin.

Climbing aboard the retro-styled bike, the first thing I noticed was the low seat height—790mm or 31.1 inches to be precise. Being 6'3", seat height is never a concern for me, but for those not as freakishly tall, being able to plant one's feet on the ground is a confidence builder. The front wheel had a wide range of lateral movement and the equipped, wide bars gave the stylish machine a lot of low speed control and a nice tight turning radius.

Making my way down the Snake, the Scrambler instantly lived up to the fun factor I'd read about. Easy handling and comfortable to ride, its 803cc L-Twin air cooled engine made the 75HP known down low. Throttle authority was crisp and the power came on evenly throughout the power band with no gabbiness or surprises.

Getting a better feel for the bike, I started to push it through the complex of technical corners that make up the Snake, and the Scrambler got better with each turn and transition. The pre-load adjustable rear suspension handled my 180lbs through the corners with no problems in its stock set-up, and the front 41mm upside down Kayaba forks felt sure under moderate riding loads.

The wide 17-inch 180/55 Pirelli MT 60 RS rear tire coupled with high foot pegs inspired me to push the bike faster through the twisty roads. Even with its low seat height, the Scrambler had plenty of ground clearance.

Only when I pushed the Scrambler fast and late into a corner did I tickle the limits of the front suspension. On the wrong side of the legally posted speed limit, I came in hot to a decreasing radius turn and went hard on the front brakes. The Brembo calipers did their job, but the front forks were softer than I expected and the front end dove a little deeper than I was ready for. The self-induced upset was nothing that couldn't be quickly remedied with more gas and less brake.    I imagine that some front end suspension set-up could address the softness I felt from the forks. I wasn't on the brakes hard enough to test the the Scrambler's ABS, but it was enough to remind me that I wasn't on a sport bike. Riding one of those would come later that afternoon.

On the way back up the hill, I sat back on the seat and enjoyed the bike closer to the legal speed limit. The Scrambler seemed like it could be set-up in lots of different styles. With its wide bars, I imagined it as a mini cruiser of sorts—or a bobber, or even a cafe variant. It'll be fun to see what Scrambler custom builders come up with in the future.

The next course on the Ducati buffet was the '15 Monster 821.

The first thing that struck me about the 821 was how agile it felt as I descended through the curves of the Snake. Weighing in at 453 pounds (wet), the 821cc liquid cooled L-Twin turns out 112 hp that's controlled by a drive-by-wire throttle system and comes with Ducati's latest traction and power control electronics and ABS.

On the way down, I rode the bike in the "Touring" setting, which by no means felt slow, but since I was riding a Ducati after all, I wanted to feel what the 821 could do at the upper end of its capabilities. Changing the power mode to "Sport" was a simple one click operation which I could do while riding. The difference was instantly noticeable as the electronics system simultaneously increased engine power while changing traction control, wheel spin tolerances, and ABS sensitivity.

The bike's full power felt manageable, and the 2 x 320 brake disks and Brembo 4 piston calipers up front  gave me a lot of confidence to push the naked sport bike just a little harder. Out the box, the suspension felt very good and is fully adjustable on both the front and rear.

The Monster 1200 S was mind blowing. Featuring all the cool electronics of the smaller 821, the 1200 S is bigger and badder at everything. At 461 pounds (dry) and wielding 145 hp, the Monster 1200 S punches like a rocket out of corners—its 91.8 lb-ft of torque pressed my eyeballs into the back of my head. After getting a feel for the machine, I opened it up into "Sport" mode and started to push it. Above the Snake is a stretch of Mullholand Highway that's less busy and is a better place to have some fun without the minivans, knee-draggers and, ahem... CHP.

Down shifting to third, carrying 65mph into a 25mph corner, I didn't brake much on the exit. I gave it a fist-full of gas and hung on as the front wheel came up while the speedometer seemed to skip up to 85mph while still in a power wheelie! This damn motorcycle made me feel like Marquez chasing Rossi at last weeks MotoGP race in Holland. Truth be told, I had never ridden a motorcycle that could do that. I didn't know I could do that.  My jaw must have been hanging out of my helmet when i brought the bike back, because Stacie was laughing at me and said, "That's a big-boy bike."

It's 205hp! 420lbs (KERB), it's insanely nimble and seems to fall into to corners. Its awesomeness is palpable, but it's a track bike with lights and a license plate. The riding position is pure race and its power and gearing are up top to where a road racing motorcycle should have it.

I didn't have the nerve to search for the 1299's potential on public roads. It's no doubt a machine that only the most talented and experienced riders could take to its limits. After a half-hour, the seat got extremely hot from the exhaust routing beneath it. Past being left with a feeling of awe, there's nothing more I can say about it without having had the chance to ride it on a proper race track.

Before the Beverley Hills Ducati Demo day, I'd never really had the opportunity to ride any Ducatis. But after one afternoon of riding them, I'm a fan. Ducati motorcycles have a visual aesthetic, but it took riding them to know that they also have a "feel-aesthetic" that's common up and down their line-up.  Ducati Motorcycles deliver a uniquely visceral riding sensation. The bikes I rode left me with a lasting impression that I cannot stop thinking about. One day, I'll most certainly need to have one in my garage.