What I'm Thankful for in Motorcycling - From the RideApart Staff 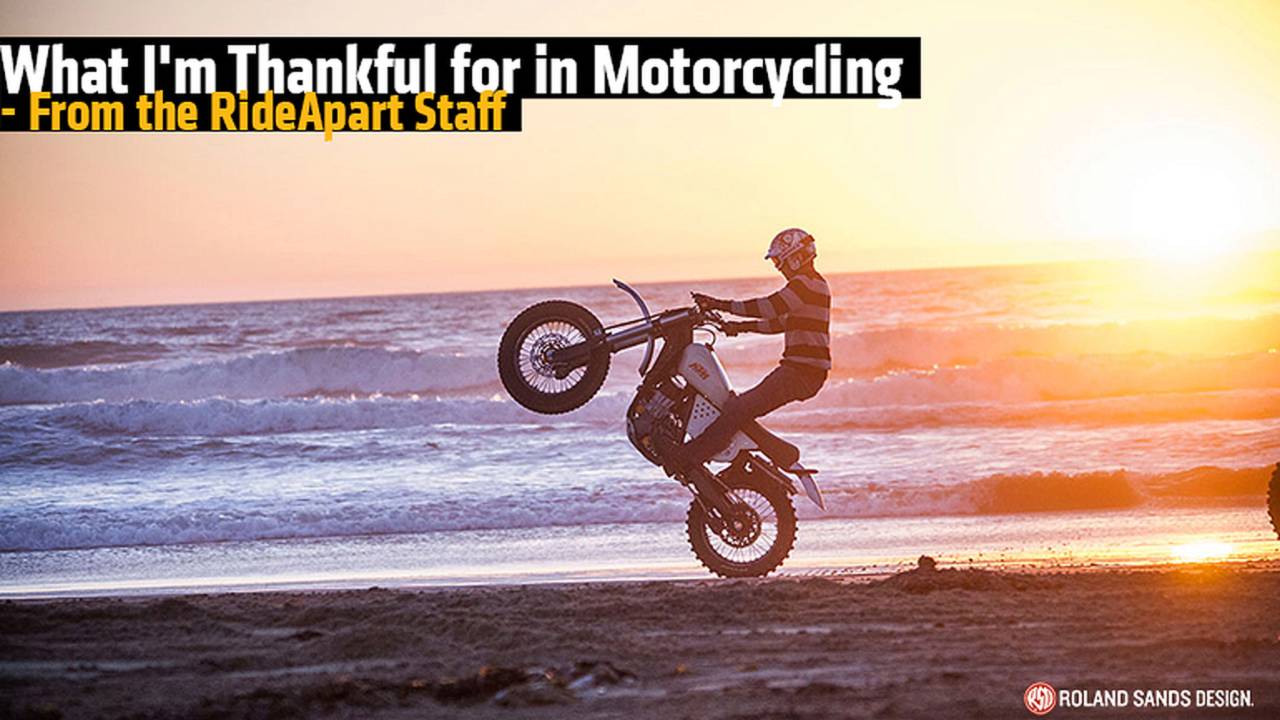 What I'm Thankful for in Motorcycling - From the RideApart Staff I'm thankful that motorcycling showed me what life could really be. I have a...

I'm thankful that motorcycling showed me what life could really be.

I have a confession: I'm a workaholic. I've always been one. If I'm not working, then I just don't know what to do with myself. I used to work without purpose. A few years ago after a series of unfortunate events, my life fell apart. Around this time, I bought a motorcycle: my 2007 Kawasaki Ninja 250. There's a great metaphor in how I learned to be a decent motorcyclist while I learned how to have a fulfilling life. There were hard lessons in both, that each resulted in physical and emotional scars. I think the decision to push on with motorcycling, despite its hardships, inspired me to push on with my own difficulties in finding myself and creating a happy life.

It's been a few years since I got my life back together, but it's not the same as it once was. I'm still a workaholic, but I no longer work for work's sake - there's a purpose for it. I work so that I have the time and resources to see the fascinating things life has to offer. The world is actually a very beautiful place, and it becomes more wondrous when you're on two wheels. I've spent 25,000 miles on my bike carving out deserted roads alone with my thoughts, watching sunsets as I search for a motel in an unknown town for the night, and enjoying the crisp cool air as I awake the next morning to do it all over again.

Sometimes I am alone, and others times I have companions. There's a magic in the connections you make with people, whether it's weeks on the road with your best friend, a few hours at a gas station with a new friend while you wait out a rainstorm, or an evening in a small town with another group of motorcyclists who are also just passing through. In each of these moments, I am grateful to be alive.

So this Thanksgiving, I'm thankful that my bike opened my eyes the wonders in life. We're only here for a short time, so we might as well make the most of it. Would I have been able to do that without a motorcycle? I'm not sure. - Jen Tekawitha.

Thanksgiving is an interesting holiday; every year it seems to be losing that original intent to celebrate being with family and friends. Much like Christmas it is commercialized and marginalized into a shopping extravaganza instead of spending time with loved ones that you don’t see often enough and truly being thankful for what we have in life. Too often we only think about what we don’t have.

So in honor of Thanksgiving we want to talk about the things we are thankful for having instead of wanting.

There are a few things in the motorcycle world I am grateful for as well. ABS brakes are a daily lifesaver and the advent of ABS while cornering makes our sport even safer. I am thankful that Kawasaki slapped a supercharger on a motorcycle to make us giggle with anticipation. I am glad MotoAmerica exists to help road racing in the US. I am thankful for radial tires, bead lock rims, heated grips, gel seats, that motorcycles still exist, and for every day that is not snow covered and I can ride.

The great thing about writing down what you are thankful for is you can see how many things are good in your life. There is so much more I am thankful for and I can honestly say I look forward to every day.

Have a wonderful Thanksgiving! - William Connor

My grandfather built the trike long before I was born. That's me as a kid joking around when my dad started making changes after he inherited the bike. The photo below is a camping trip at the Horse Backstreet Choppers Smoke Out motorcycle rally. I rode the trike there with a cooler and sleeping back strapped to the back, although this night I slept right there. I found this photo on a random blog.

Family. It may sound cheesy, but like so many others, my father got me into motorcycling and while a motorcycle took his brother's life (read "The Risks of Not Riding a Motorcycle"), I'm still thankful for the common bonfire that is motorcycling.

My grandfather had a collection of motorcycles when he passed, but I was too young at the time to appreciate it. I was a kid when he passed and we've sold most of the bikes since then, a couple early BMWs, a 1914 Indian, a midget open-wheeled race car powered by an Indian V-twin and a WWII military Harley-Davidson.

But one bike still remains, a custom Harley-Davidson servi-car. Built in 1983 my grandfather Lester, had a special deal with HD to get the Evolution engine a year before it was really released (first year was 1984 in limited production and all HD's were powered by the Evo in 1985). Friend Joe Smith and my grandfather, had a science when building three wheelers and built a perfectly tuned trike. Geared high with a long raked front end, it was built for long trips and the power train and handling were perfect, despite the terribly ridgid ride.

When it was handed down to my father, he lowered the rear compartment which was originally a large box for storage, my grandmother sat on.

Every time I visit my North Carolina home I try to ride the bike, take my girlfriend to the local Southern race track for Saturday night action. It's a large, clunky, rough-riding mechanical beast, but I absolutely love it. Not for it's performance or comfort, but for what it stands for: A piece of my family that will hopefully always live on, even when members of my family don't.

I'm thankful for motorcycling in general. For builders, mechanics, racers and riders, this is a common interest that brings us together, sometimes for worse, but those few times for the better outweigh the bad. - Jesse Kiser

Like most of us here at RideApart, I'm thankful for the people. The machines that brought us all here are special and exciting, but it's the people that make the experience of motorcycling as passionate and rewarding as it is. I'm thankful for the boys and girls here at RideApart for giving me a platform to share my stories, to the riders who have shared their stories with me, and to the staff and fans at the tracks for making the experience that much more special.

I'm thankful that the circuses of awesome that are the Isle of Man TT and the Macau GP continue their proud histories, in spite of a risk-averse world. I'm thankful for the friends who have lent me a bed for the night, a spare in the pits, and a beer at the end of a long day. And most of all, I'm thankful for my beautiful and talented wife, whose loving support, criticism and patience have made this whole crazy year possible. - Pete Hitzeman

Do you think Jason should buy the CB300F?

I came into motorcycle writing - and riding - by accident; last year I took a freelance job writing content for a the website of a major U.S. motorcycle manufacturer. (Not Harley. The other one.) Taking that job was like being thrown into the deep end of the pool - I had to learn a lot, and learn it fast.

READ MORE: An Open Letter To Every Person I Meet Who ... - RideApart

As RideApart's Resident Noob, I'm still learning, but as Thanksgiving approaches I'm thankful for everyone who's made my journey into motorcycling a great one by teaching me about these machines and this life, from my fellow RideApart teammates to the readers and commenters who both encourage me and keep me on my toes. - Jason Avant.

What are you thankful for this Thanksgiving?