Hero MotoCorp Coming to the US, with Help from Tiger Woods and Erik Buell 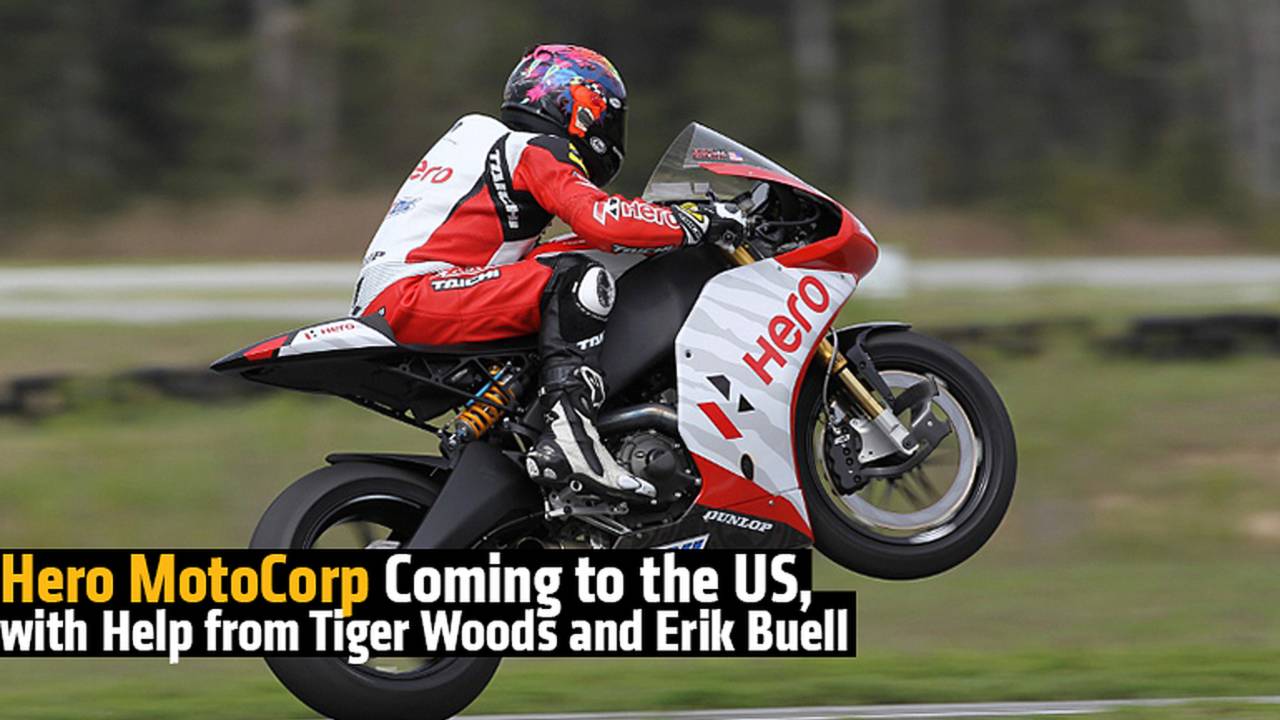 Hero MotoCorp will soon be selling bikes in the U.S., with Tiger Woods as a pitch man.

Is the world's largest manufacturer of two-wheeled products, Hero Motorcycles, finally coming to the US? It looks that way, with a significant presence at the recent Hero World Challenge Golf Tournament and its newest spokesman, Tiger Woods.

While he might not be tearing up the streets of Isleworth, Florida, after his legendary practice sessions, Tiger Woods, the prolific golfer with fourteen-major titles and winner of 79 PGA Tour titles, has recently developed a partnership deal with the India based Hero MotoCorp Ltd, the world’s largest manufacturer of two-wheelers.

Mr. Pawan Munjal, Vice Chairman, CEO and Managing Director of Hero MotoCorp is seen below with Mr. Woods on one of their motorcycles at the title sponsor’s four-day golf tournament for an elite 18-player field, ending this Sunday in Florida.

The relationship between Hero and Woods is global, and not just limited to the US. What is more important for us in the US of A are the big ad dollars Hero recently spent last weekend during the Hero World Challenge golf tournament put on to support the Tiger Woods Foundation. Which begs the question, why are they spending so much on advertising here in the US if not to have plans to sell in the US?

Mr. Munjal has stated that Hero is “going global” at his press conference at the Hero World Challenge and aligning with Tiger Woods was a logical next step in their brand association at a global level. Hero is reportedly paying Tiger nearly $8 million a year in connection with the endorsement.

With plans to enter the U.S. market by 2016, expect Hero to become a presence in the motorcycle market for years to come.

Golf and motorcycles? It turns out that Mr. Munjal has a fond affinity for the game of golf in India. He plays regularly and is a former Chairman of the Asian PGA Tour Board of Directors and President of the Professional Golfers Association of India. Tiger Woods has for many years been a friend with Arjun Atwal, one of the few India born professional golfers. For many years Arjun encouraged Tiger to visit his home country.

Finally, Tiger Woods met with Mr. Munjal at the famed Delhi Golf Club, the oldest and most prestigious golf club in Delhi, with a membership waiting list spanning more than 30 years. On his first time on the course, Tiger shot a 63; this may have further impressed Munjal and the Hero team.

Hero Motorcycles has had a relationship with EBR over the last few years, developing a couple Hero Motorcycles with the EBR engineering team, investing in the company and sponsoring their racing efforts.

It was projected that Hero Motorcycles would be sold in the US through EBR dealerships this past summer (May, 2014), but that never happened. EBR said right now is the perfectly wrong time to ask about distribution plans and things are being worked out as you read this.

According to Hero, 2016 is when we’ll see bikes sold in the US, but EBR won’t comment if that’ll be through their dealerships primarily or only partially. They do continue to have a strong relationship, sharing booth space at the recent AIM expo.

As for the golf, a young protégé golfer, Jordan Spieth, scored a staggering 26-under par over the four-day event culminating on December 7, 2014, beating the field by 10 shots at Isleworth Golf & Country Club. Jordan Spieth is the former standout amateur golfer, who captured two United States Junior Amateur titles and recently won his second professional event last week at the Australia Open.

Woods did not have his best showing, finishing the event at even-par but fans should be encouraged by his health, given his struggles to stay on the course battling various back and knee issues over recent years.

Hero, as the title sponsor of the event, teamed up with the Tiger Woods Foundation to host the tournament. The event used to be played at Sherwood Country Club in California, but recently moved to Florida. Hero will continue to sponsor the event going forward and riders should expect more from Hero in foreign markets and the United States.

We congratulate Jordan Spieth on the victory and for Hero’s move into the U.S. and other foreign markets.

Now we only have to wonder what Phil Knight, co-founder and Chairman of Nike, is thinking as Tiger Woods gains more affinity toward motorcycles!