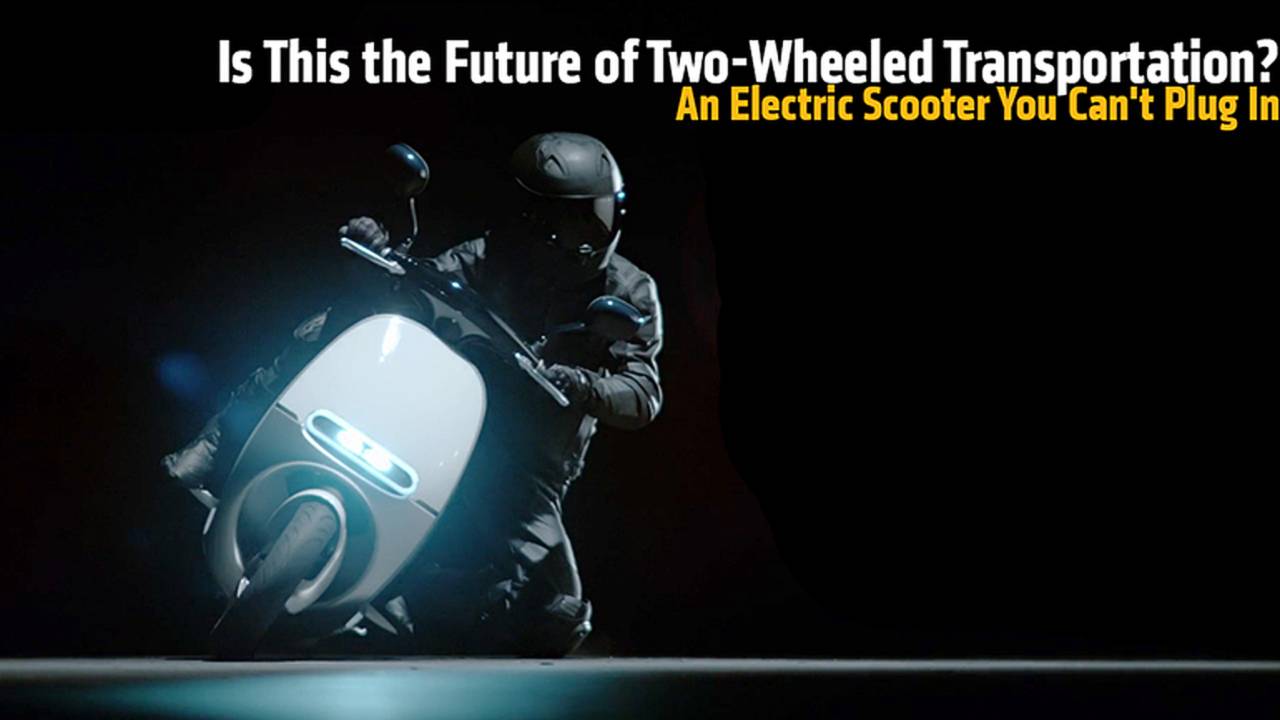 Is the Gogoro electric scooter the wave of the future in two-wheeled transportation?

At first I assumed this was purely transportation, something on two wheels designed to suck the soul out of a motorcycle, similar to how a Prius sucks it from cars. That was until I saw the advertisement of a leather-suited rider dragging a knee and smoking the rear tire (watch the video below).

From the founders of HTC, yeah the phone company, comes a new fully electric scooter system that may be the wave of the future in transportation, with a 60-mile range and you can’t plug it in.

We’ve been limited by gasoline-powered, internal combustion engines for many reasons, one being the infrastructure. Gas stations are everywhere and it’s relatively easy to get gas, carry it, store it and fuel up your car or bike. That’s been the major hurdle with electric transportation. When your range is out, it’s out.

Hybrid systems are one solution to that problem, using both a gasoline engine and an electric engine, so when the power is out, the gas takes over. But you basically carry two engines in one vehicle and you’re still burning fuel.

Now, the founders of HTC have found what they believe to be a solution, with an a new electric scooter, the Gogoro.

It’s been tried before, but this new system may be the future. Their intelligent scooter uses two batteries, with a user-friendly design complete with handles, that feature a range of 62 miles at around 60 mph. It’s a totally electric system, not a hybrid, instead the Gogoro’s system uses battery stations where a rider can quickly exchange two depleted battery packs for two that are charged and ready.

The recharging/battery exchange stations are about the size of a vending machine, meaning they can be placed inside parking garages, corner stores, etc. many areas you can’t fit a gas station.

The cost of fitting these vending machines throughout a city are vastly smaller than something like a hydrogen station or a plug-in recharge station that still requires time to recharge. Exchanging the batteries replaces the hours spent waiting on a charge, with seconds it takes to switch them out.

Of course scooters are not taken as serious transportation in much of the USA, as they are in foreign, particularly Asian countries, where the Gogoro is primarily focussing it’s efforts.

This new system has big potential outside of scooters too. For instance, the scooter has connectivity to the Cloud for collecting data and smart phone users can control different things about the bike like the lighting, sounds and LCD screen.

The battery infrastructure has has great potential in basically any market that requires large, portable batteries.

Where/When Will You See One

The start up company has a long road on a big mountain ahead of them as their plan is ambitious. Targeted for an Asian market, we will probably see them in the USA around the same time. If you look closely, the advertisement is filmed at the California Speedway in Fontana, California. That’s not a major sign they’ll be for sale here, but the company doesn’t have official word on dates and launch locations just yet.

READ MORE:  How To Safely Pass Other Traffic | RideApart

Read an in-depth story on Verge.com.