Tales From A Noob: Because Mom Can't Say No 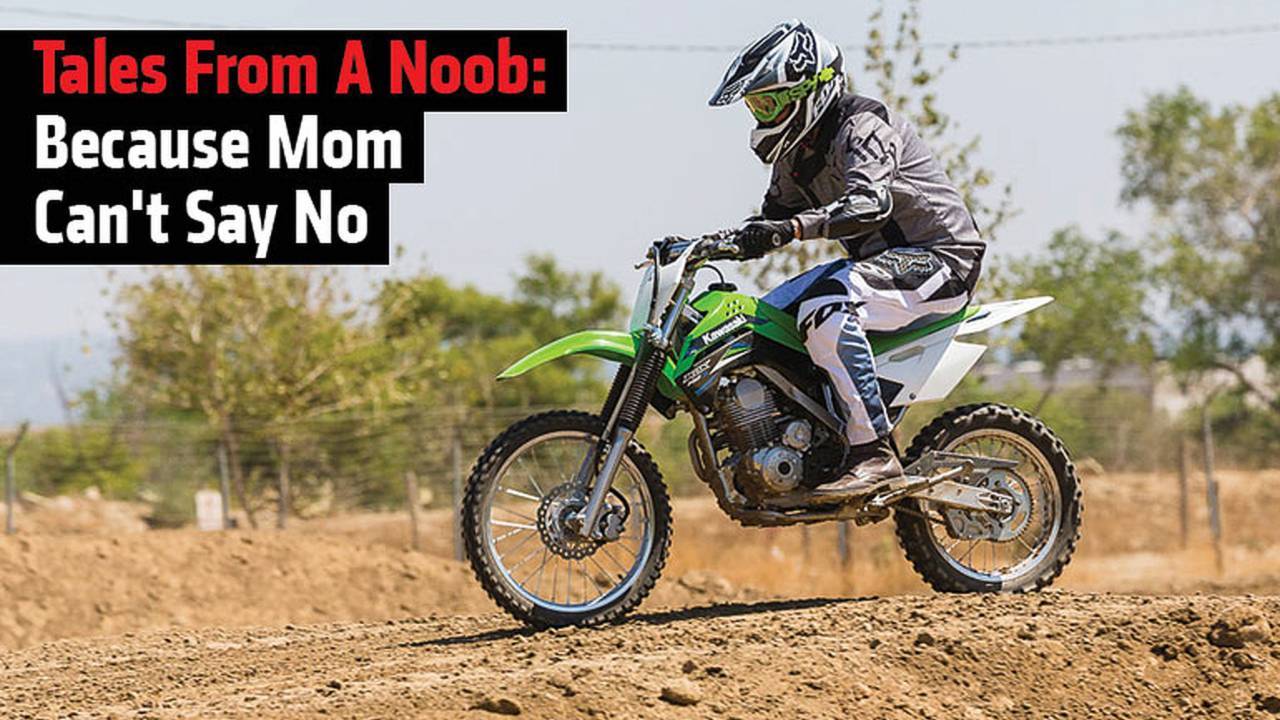 When the noob gets their first taste of dirt there is nothing to stop him from going faster and jumping higher. Nothing except his own boundaries that is.

The universe operates in absolutes. As Sir Newton put it, “...every action there is always opposed an equal reaction.” For me, it was dedicating my life to anything with a motor. As a kid I wanted nothing more than to be an Air Force pilot. As a teenager, it was an automotive designer. Today, it’s to be the best motoring journalist I can possibly be. And now, I'm determined to graduate from noob to seasoned rider.

With that brief history you can now begin to see how most of my life left out the mention of motorcycles. It’s not that I never enjoyed them. It’s quite the opposite really. I’ve always loved bikes. I loved the sound, the ability to traverse a continent for a song and to looks as bad ass as you most possibly could (with or without tattoos and leather).

For most beginning motorcycling enthusiasts it’s your mom that has the most influence on how often you ride, what you ride and to what aggression level. Sadly, during most of my adolescence I was told “If you can afford a motorcycle, you can afford to live on your own.” Seeing as how I was in High School earning minimum wage in Arizona, I really couldn't justify the expense. So my motorcycle riding days would have to be put on hold.

Today, I have ironically found myself as the editorial director of RideApart. What I do is manage content and make sure our writers or aspiring riders have a venue to discuss culture, gear and bikes. So far I think we’ve been doing a damn good job. But as I’ve been reading each adventure, each piece of gear and the passion from our readers; my desire to ride has been reignited.

When Kawasaki invited RideApart to their 2015 KX250F and KX450F launch at Milestone MX park a few weeks ago they also invited my rookie ass to come give it a crack on a 2015 KX140L. “Just bring some boots that cover your ankles, we’ll take care of the rest.” I couldn’t possibly say no.

I arrived at Milestone with more confidence than butterflies. Not to mention a stylish pair of boots since I don’t really own a $500+ pair of proper MX boots. I’d quickly learn why you needed a pair as the day progressed. But I had arrived and was thrilled to finally fulfill a childhood dream of mine.

When I began to suit up I felt something take over besides nerves – courage. It’s nice to know that with the proper gear at your finger tips you can worry less about injury and more about the job at hand. For me, I was worried I’d be popping out of first for a good part of the day. Luckily Kawasaki had me kitted out in some choice Fox gear. I certainly felt the part but as you can see from the photo, I looked like a dweeb. But who the hell cares, I was about to ride a damn dirt bike!

Mounting the bike I was unsure of how my glance (or lack thereof) would perform but once I gripped the bars and figured out where the hell my fingers were supposed to go, I started the bike. Luckily for me the new KX140L utilizes an electric starter. While my first exposure to a dirt bike wasn’t greeted by the age old baptism by kickstarted the new aged technology did allow me to focus on my riding and not to worry so much about when I stalled out.

“Ok pull the clutch in. Kick down to first and slowly let out. Look for the bite point and throttle accordingly.” That was it. Once I felt the bite, I was off! Nothing could stop me. I was even brave enough to search for second gear and down shift before I entered my first turn. Shit. A turn! Wait, how the hell do you turn these damn things? The one bit of information my tutor left for me to figure out. Which I did…slowly. Very slowly. So slow I took the entire width of the lane I was practicing in, roughly 20 yards wide, before I grabbed the brakes and decided I indeed had no idea what I was doing. A quick chat about speed, balance and angle and I was off again. This time I’d set target goals for myself. I aimed for two yards away from the fence and hit my marque as I, again, slowly navigated my turns. Next, five yards, then ten before my familiarity sessions were done I was whipping around a tree trunk the size of toilet paper roll. I was feeling great!

“Ready for the track?” My Kawasaki Yoda, Greg Emmerson, hollered at me.

“What the f*#k?”, I instinctually replied.

It was time. Time to figure out how to navigate some baby whoops a few table tops and the corners. All while on a muddy, damp, rock filled surface. Joy!

I’ve had the privilege to drive some amazing cars in my short career. Grip is always an issue. You’re aware when you break loose but you also have a crap ton of nannies watching over you so you’re not too far into the red zone before you toss a car into the ditch.

Motocross bikes are an entirely different animal, and I loved every second of it. My body, mind and reflexes were challenged at every moment. Rocks became a joy to run over and loosing grip was somewhat of a benefit depending on what your exit strategy was around every corner. I wasn't concerned with falling however, that part is inevitable. What was fascinating to me after every 45 minute stint was how my brain went into overcome mode. I yearned to tackle every corner faster, approach each jump a little more aggressively and grab a few more gears on the front and back straights. I needed to go fast. I needed to leap higher. I needed to brake deeper. I needed to own a motorcycle!

Approaching each jump I felt myself wanting to get more air. Sure, after reviewing the photos my best documented leap was a mere few inches but it sure felt like a few feet to me. I throttled up, give the bike a little lift before the lip and see what would happen. A few times I landed a little "off" but managed to keep my composure. Around each flat corner I couldn't help but find that extra gear before sitting on the tank and down shifting like I'd done it a million times in front of a crowded Supercross arena. I needed to own a motorcycle!

“Did you enjoy it?”, Greg said to me as he rested his hand on my shoulder. As if I’d accomplished the very thing he knew I could do from the beginning.

“Look at that smile!” His co-worker and my on-track chaperone proudly pointed out.