A Crossover That Acts Like a Sportscar: 2015 Mazda CX-5 Review 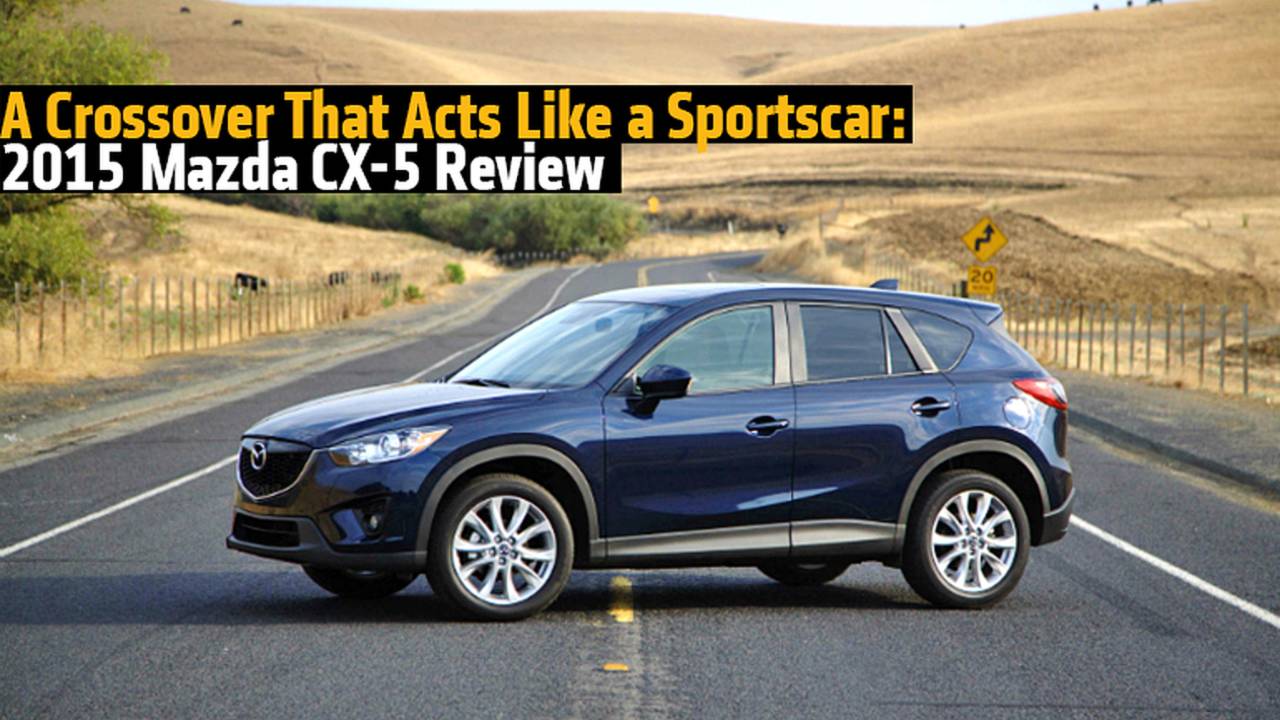 We review the 2015 Mazda CX-5, a cross over that acts like a sportscar.

If you enjoy the driving experience of hustling a willing automobile down a twisting back road but need the utility of a crossover, nothing this side of an expensive European variant comes close to the engaging Mazda CX-5.

Short of a Porsche Macan or an Audi SQ5 that each cost more than double the Mazda, nothing - and I mean nothing - in its class offers the driving dynamics of the CX-5.

It’s as comfortable tackling a tight road at speed as it is doubling as a pack mule stuffed with groceries and other household items that invariably land in the nether regions of most crossovers.

But what about hauling the family? It of course does that too; a headcount of four is simple, and even an occasional fifth adult isn’t a worry either. It’s also affordable and economical with a base price of $21,545 and up to 35 mpg highway. Did we mention that it can also be ordered with a manual transmission–DIY shift lovers, rejoice!

Over the course of a week and 1000 miles that took us from San Francisco to the Central Coast with long highway stints, hundreds of miles on winding inland roads, some off-road excursions and of course, some bumper-to-bumper traffic, we found the 2015 Mazda CX-5 to be as engaging as it is practical–it’s the crossover for those that swore they’d never drive an SUV.

As I’m sure you already know, the Mazda CX-5 has been garnering accolades from the automotive community since it was released in 2013. It replaced the aging CX-7 and was slotted just below the full-size CX-9 in the Mazda lineup.

The CX-5 rides on a bespoke chassis that features a 106.3-inch wheelbase with length and width specs of 178.7 and 72.4-inches. These proportions place it smack in the middle of its class, one that includes such competitors as the Honda CR-V and the Ford Escape.

It sports Mazda’s bold KODO design exterior treatment that’s easy on the eyes, but really, it’s what’s on the inside that counts. Underneath the chiseled bodywork is a chassis that’s willing and able to cut apexes and please all but the most jaded of gearheads. It features large disc brakes on all corners and available 19-inch rims and all-season performance Toyo tires.

Life inside the Mazda is equally satisfying with cloth or available leather accented by a raft of understatedly elegant controls, a gated shifter with a manual mode (no paddle shifters), and a standard 5.8-inch touch-screen display and back-up camera with optional navigation. Blind-spot monitoring is also available. In later years, Mazda’s Smart City Brake Support joined the party; it’s a laser-based system mounted in the windshield that can prevent low-speed crashes (up to 19 mph) by applying the brakes in the event the driver ignores the in-car warnings.

As mentioned, the CX-5 can be had with a six-speed manual transmission, but only when paired with the base 2.0-liter motor (more on that later). However, all models can be outfitted with the more popular and highly capable six-speed automatic transmission. This isnt your grandpa’s slushbox; it features a torque converter to aide in smooth stop-and-go driving, but unlike traditional units, it locks above 5 mph for greater efficiency, effectively making it behave like a dual-clutch unit that rev-matches on downshifts. The CX-5 is also available in FWD and AWD formats.

If there was one gripe with the early examples, it was the frugal and willing but slightly underwhelming (it’s adequate, but never overabundant) 2.0-liter four-cylinder motor that’s still offered as the base engine. It produces 155hp and 150 lb-ft thanks to Mazda’s Skyactiv technology that includes a lofty 13:1 compression ratio and a unique combustion design that allows it to run on 87-octane gas. Normally such a high compression ratio would require at least premium fuel, but thanks to direct injection, a unique piston design, a tubular exhaust header that promotes scavenging and variable valve timing that allows the motor to act like an Atkinson-cycle engine to improve efficiency, the highly effective motor manages to run on regular gas. What does this mean? Well, the under-square motor makes great power from idle to redline without expensive fuel requirements.

This means that hypermilers will likely opt for the stick-equipped 2.0L and snow-goers will accept the obligatory mileage penalty for the AWD, but still be content with competitive mileage. Everyone else can save money with the smaller 2.0L or opt for the more expensive and more powerful 2.5L with nary a mileage penalty.

Mazda answered our requests to sample a FWD variant with the bigger 2.5L motor by supplying us with a top-step Grand Touring model in a beautiful Deep Crystal Blue Mica exterior hue with Sand leather interior–it was stunning.

As for options, it was well speced with the blind-spot monitoring, the Smart City Brake Support, Nav, the adaptive HID headlights, 19-inch wheels and the whole shebang. Of course it had the 2.5L that sent power to just the front wheels–exactly what we hoped to sample.

You get the point; the CX-5 drives unlike any compact SUV/crossover this side of a Porsche. It’s engaging, lively and truly deserving of the patented Mazda catchphrase, Zoom-Zoom.

It devours twisty roads nearly as efficiently as a Miata up to a 9/10th pace, at which point the undefeatable stability control reigns things in. Sensibility beckons: do we really need to drive a crossover that fast? Indeed we do, but only if it’s as fun as the CX-5.

READ MORE:  7 Reasons Why I Love and Hate the McLaren 650S Spider | RideApart

Some testers found the ride firm, but it's never harsh - rather, think taut. You feel the bumps, but they’re never intrusive. It’s not quite as supple as a Honda CR-V; then again, the Honda’s steering and chassis aren’t nearly as responsive as the Mazda’s either.

The brakes are strong and progressive, a great match for the chassis. Power from the 2.5L motor is more than adequate with ample off-idle torque that transfers to a nice pull to the 6,250-rpm redline. It's not going to win any drag races, but it's more than enough for its intended use. Whether driving solo or packed with four people and gear, the motor always had enough poke to merge onto the freeway, move out to pass cars or accelerate from a light. Could we use yet another 25hp? Sure. But do we need it? Not at all.

The crisp shifting six-speed automatic transmission is always in the right gear and even holds lower gears through turns as if if were a manual. The tight spread of ratios keeps the motor in the meat of the powerband, yet top cog is tall enough for relaxed highway cruising.

The well-paired engine and transmission combo suites the CX-5 well for both performance and economy, as we recorded nearly 31 mpg over the course of our 1000-mile journey. That’s great mileage considering the varying conditions.

Life inside the cabin is equally nice thanks to comfortable and adjustable seats, an eloquent dash layout finished in piano black and a raft of classy analog and digital instrumentation. The heated seats were hot enough for most, but some thought they could have used a little more sizzle. The dual-zone climate control was effective, as was the blind-spot detection and the back-up camera.

Carrying capacity proved more than adequate and while rear seat space is more cramped than say, the CR-V's, it’s still ample enough for all but five full-sized adults on an all-day journey. We also thoroughly enjoyed the adaptive HID headlights on dark roads and shamefully admired the Smart City Brake Support the lone time it jolted us from an early-morning stupor.

We found little fault in the CX-5, but when we dug deep there were a few quibbles, the first being a dated and somewhat temperamental head unit. Bluetooth connectivity was sometimes lost, it uploaded contact lists from paired iPhones with each start-up (this took under a minute), and at times, it didn’t follow the iPhone’s commands on first attempt. The screen is also on the smaller side when compared to competitor’s units.

Other small gripes included the absence of a power rear hatch, and only the driver’s window switch was backlit (we told you we had to dig deep in order to find fault).

Oddly enough, the driver’s side mirror glass occasionally fluttered at speed. A search of some CX-5 forums proved the mirror-glass is an easy fix at the Mazda dealer with updated hardware and most importantly, that the upcoming 2016 CX-5 receives a refresh with a host of exterior and interior improvements, one being an updated headunit pulled from the Mazda3. For reference, the headunit in the 3 is both cutting-edge and top-rate in its execution.

All things considered, we found little fault with the CX-5.

If driving dynamics is part of your equation for compact crossover greatness, then look no further. Simply put, no other vehicle in its class pings the fun-o-meter like the CX-5, and all without giving up anything in the area of utility.

If you were the type that swore you’d never own a crossover or SUV but now find that family or career requirements necessitate such a vehicle, the Mazda CX-5 will fill those utilitarian requirements and still put a smile on your face with every twisting onramp or bending backroad. Some call that having your cake and eating it too.

READ MORE:  5 Cars That Wished They Were Motorcycles | RideApart