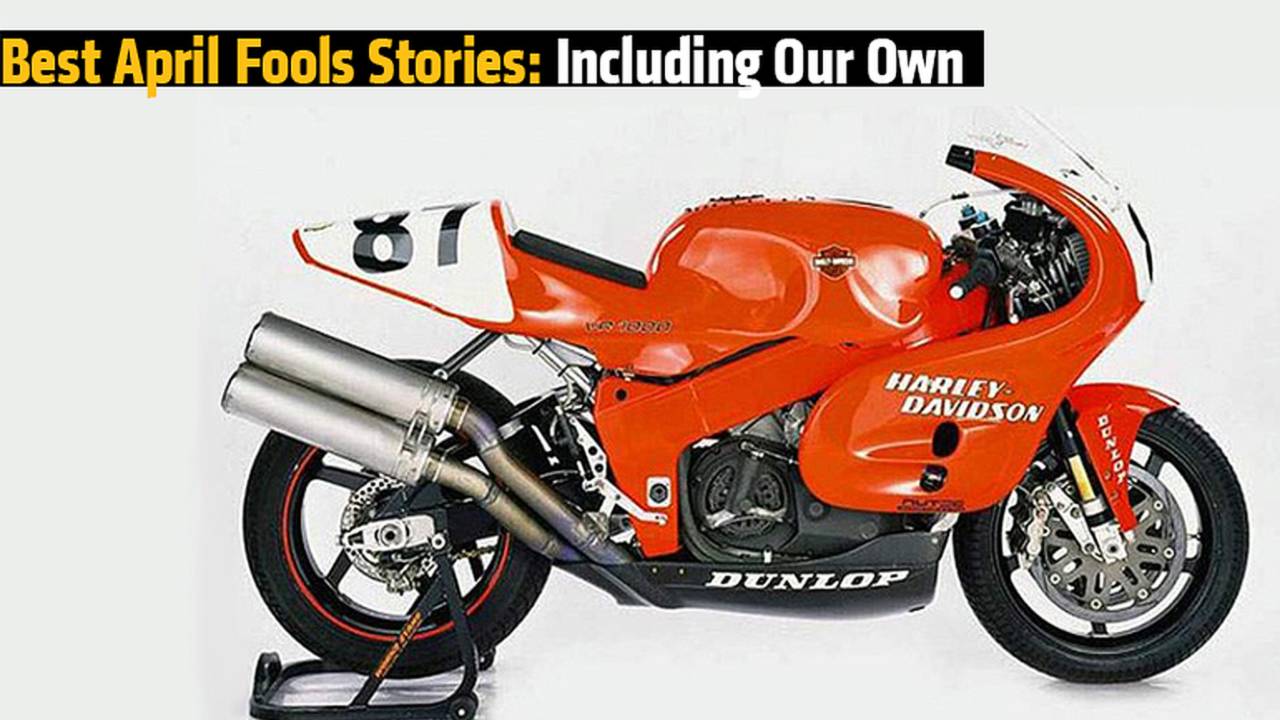 Best April Fools Stories - Including Our Own April Fools is a day editorial people get to dream and dream big. Imagine a world where the most...

April Fools is a day editorial people get to dream and dream big. Imagine a world where the most ridiculous things and you're biggest fantasies come true. For Motorcycle USA it was the ridiculous, for us, it was a dream we wish to be true.

We collected a handful of our favorite gags from around the inter webs and not just motorcycle related. Enjoy.

Tax time have you down? Well, just in from Asphalt and Rubber, you can write off that expensive Arai helmet you just bought. Jensen is at it again for this year, "If you’ve already filed your 2014 tax return, you might want to make an addendum before April 15th, as the Internal Revenue Service (IRS) has made several last-minute exemption to the US Tax Code, one of which allows motorcyclists to claim up to $500 on a new helmet purchase as tax deductible."

Including quotes from an IRS Special Agent that confirms you can write-off your motorcycle helmet this tax season, due to a Centers for Disease Control and Prevention study that suggested billions of dollars could be saved if all motorcyclists wore helmets. Seemed pretty damn convincing.

Click here for the full read: Tax Break for Bikers

We were only able to find this one on Facebook, but BMW released the Acceleration Package for their S1000RR. The track-ready sport bike would feature little blue button on the left controls that will activate cooling grips and an air-conditioner… yep, you're BMW will now have A/C. Well, not exactly as this was a funny social media push.

"When it's getting to hot on the track you definitely need a way to cool down. The new BMW S 1000 RR with Acceleration Package fits your bike with air conditioning and cooled handle grips."

Now, as you're prepping your bike for the track, you'll need to check your freon level while checking your tire pressure.

Click here for the full read: Cool Riding with BMW

Sadly, the news of Harley Davidson returning with a VR1000 is not true, but in fact, a April Fools joke. We had many others planned, but we thought this would rile you guys up the most.

"The next generation VR 1000 will displace the maximum 1200 CC, utilizing a modified revolution power plant. This motor was first seen in the V-Rod over a decade ago. It's undergoing heavy reengineering, according to HD, with an emphasis on weight loss and higher operating RPM."

No Need for a Helmet While Racing

Motorcycle USA reported that MotoAmerica is not forcing it, but if you want to, you can wear a helmet while racing in their series. "MotoAmerica: “Helmets recommended but not mandatory” for most racers," according to Motorcycle USA. "The very idea is shocking, but that’s definitely the implication of a few lines that I found buried deep in a draft copy of MotoAmerica’s still-evolving technical rules… When I searched the rest of the book without finding some other rule enforcing helmet use for competitors over 18, I thought I’d found a mistake or misprint." That was pretty funny.

Click here for the full read: No Need for a Helmet While Racing

Turbos and a Split Bumper

One of my personal favorite was not a motorcycle one, but done by a few friends of mine at HOT ROD Magazine. News that they had received inside information as to the specs and plans for the next generation Camaro performance package, which would not only come sooner than you'd think, 2016, but also include some awesome upgrades, like a split-bumper option. Yes, a split bumper, something Chevrolet hasn't done since the early '70s.

It would be the 2016 Camaro ZL2, featuring a turbo charged small-block 396ci V8. "The overall design will be similar to the outgoing model, but pinched, and squeezed, and taking some more design influence from the early 1970s… and will offer the first-ever automatic adjustable rear wing in an American production car. Sure, Bugatti has its air-brake wing, but can you imagine the faces of the crowd when you move the rear ducktail in a Camaro at the drags?!" Bravo Brandan.

Click here for the full read: Turbo Big Block with a Split Bumper

I'm sure we missed a bunch. What was your favorite from this year or prior? Comment below.