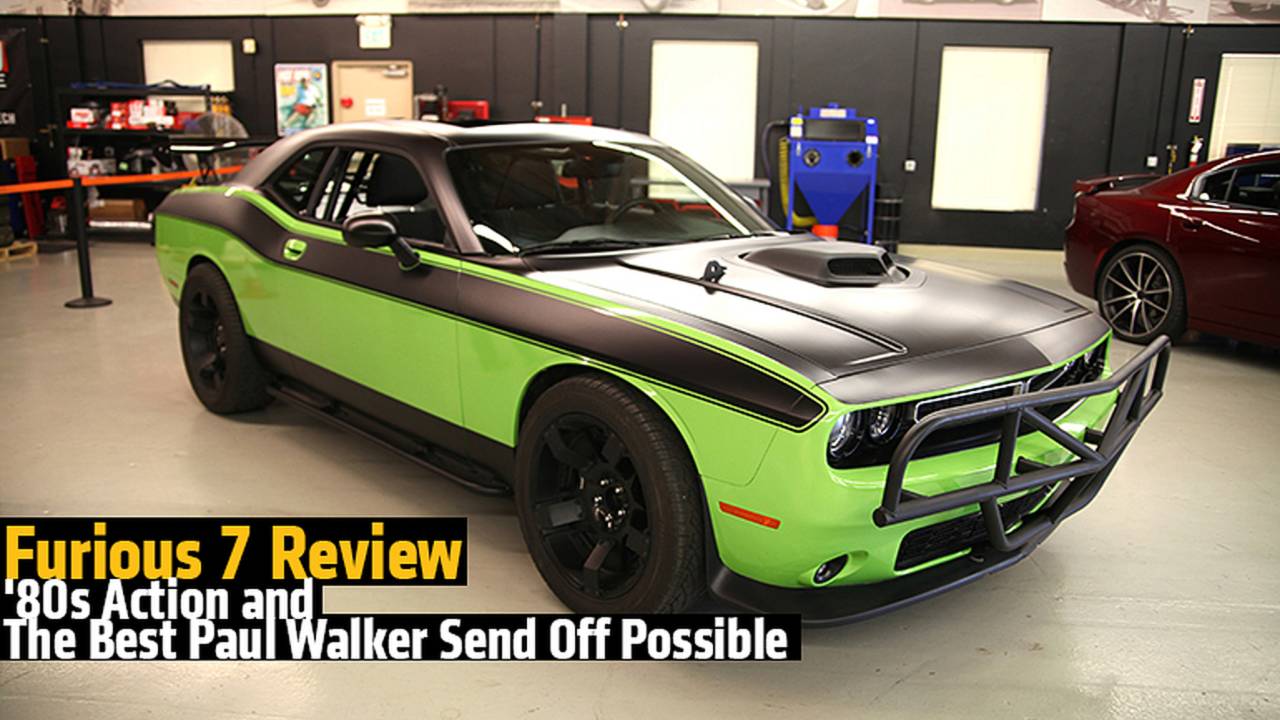 Furious 7 Review - '80s Action and The Best Paul Walker Send Off PossibleI was 16 when Fast and the Furious came out and remember making my dad...

I was 16 when Fast and the Furious came out and remember making my dad watch it with me. “He’s a cop, isn’t he?” he said roughly 10 minutes into the movie. Although the movie has long since lost its sense of innocence, that predictability still remains prevalent. The same cheesy lines packed on top of simplistic action and plot, followed up by perfectly timed and incredibly unbelievable save-the-day moments. The audience knows the moves before they’re made. Was it a great, award winning movie? No. Did I absolutely love it? Yes!

Dodge held a pre-screening of Furious 7 at the Motor Trend/Hot Rod Garage in El Segundo, California. The place where they tape YouTube series like Hot Rod Garage, Roadkill, Head 2 Head and Ignition. This was my former employer and the garage I spent many late nights at.

Dodge brought with them the bulletproof four-door Jeep that Ludacris drives in some of the chase scenes, along with a couple other Dodge demo models that resembled those from the movie.

According to Dodge, there are 45 Dodge vehicles in the movie, all without an over done product placement moment—except for the Middle East scene where the team arrives in six different super cars including the million-dollar Bugatti Veyron and... a Dodge Charger.

I enjoy car and motorcycle movies of all types, even if they’re covered in horrible inaccuracies in mechanics, physics, the community, and the genre itself. It’s still fun to see hot cars or bikes flying around on the big screen, like the opening scene in Furious 7 where Toretto (Vin Diesel) and Letty (Michelle Rodriguez) arrive on a desert drag racing event, RaceWars (yup, you remember it from the first one.) A drag race event held in the open desert of California, it’s filled with hundreds of cool cars, good looking people, and enough scantily clad women in the crowd that it could fill a Victoria’s Secret catalog. Honestly, I don’t think I’ve ever seen a string bikini at a car show, but RaceWars had many of them.

Toretto leans in the car window as Letty stages her Plymouth ‘Cuda. In his overdone tough guy voice, he says, “keep it under 9,000 R... P... M... the other guy is gonna blow out his pistons.” The other guy is driving an Audi R8, a car that doesn’t exactly have a habit of “blowing out pistons.”

Of course, it happens as he predicted, and they won the race, and pulled back into the pits to a gigantic crowd of those women in string bikinis. High fives, hugs, and cheers a plenty. I used to race semi-professionally and don’t believe I’ve ever received a high-five from random people after a win. It’s my fiancé's worst nightmare when I leave her to go to a car show, but it’s very far from the truth and despite it’s laughable inaccuracy, it’s still enjoyable.

The makers of Fast and Furious know at this point, you’re only here to see fast, cool cars in the background of ridiculous, over the top summer time stunts and fight sequences, so they get through the first half of the movie quickly.

Getting through the plot quickly involves nearly unbearable cliché lines and predictable moments. They know that’s what we paid the non-matinee price for—not any of this acting, plot devices, or character development, pssh... Get to the good ‘ole action, blowing up stuff and punching people.

Furious 7 began to remind me of movies like Biker Boys. Neither are AMC Top Movie picks of all time—far from it. But they’re comforting, easy to predict, don’t challenge me in any way and remind me of simply ideas that transcend to everyone in the audience—the love of cars and/or motorcycles, your own life, family and doing fun things. That’s a lot of the Furious 7. It's also gross and over the top at times, but the themes are easy to relate to and the action is easy to enjoy.

Halfway through the movie I began reminiscing of ‘80s action movies. Saturated with over-the-top action, I love them, but in a different way than the Fast and Furious franchise. Is it because they’re naturally covered in nostalgia? Will Furious 7 be this comically cool movie I love to watch when it airs on a cable channel on a Sunday in 20 years?

After the movie, I thought it was better than number 6, but when I looked back onto the many different places and settings, in its 2 hours and 17 minute run time, I don’t agree with that anymore. It left me with a feeling that I wouldn’t be regretful of the money I spent on a ticket and popcorn (if I did actually buy it), but Furious 7 ran out like a list. A new job, after new job, all done with same formulaic fashion.

The action broke the laws of physics and sometimes didn’t make sense how someone came to save the day, but it was admittedly fun to watch. Big action sequences seemed repetitive, where the team would pull the same trick move over and over again.

The movie series has come a very long way from innocent roots of a charming undercover cop infiltrating a street racing ring. It’s far from the fast cars, hot women, and fun times that was sprinkled with action and bullets. It's now this over the top, outlandish premise of a team of unskilled, untrained car guys and girls fighting elite military trained bad guy organizations. I do miss the innocence of the original, but through the saturation of bullets and expositions, Furious 7 still shines with its fun quality.

Although I’m not as excited to share Furious 7 with my dad as I was with Fast and Furious the original, it still reminds me of my own family and life. The themes of the original are still there.

I don’t usually get upset when a celebrity dies—death is a part of life. If I didn't know them personally, why should I be hurt by their loss? But when Paul Walker died, it hit hard. I planned on attending the charity event he was leaving and had a couple friends who witnessed the aftermath first hand. Beyond that, Walker represented a time in my life I'm the most fond of—Being a teenager who was loving cars and loving family and friends, and I loved all gear head things. I watched Paul Walker play as Brian O’Conner, and dreamt of becoming him and owning a shop with my buddy in the hot sun of Florida or California, while building fast cars and motorcycles.

Paul’s brothers, who filled in for the final bits of taping for Fast 7, recently said they hope the movie lives up to Paul Walker. Does it? No. Not because it’s a bad movie, in fact, the send off and tribute at the end brought me to tears and possibly the best I’ve ever seen in a movie. That’s not the issue. Paul Walker became something bigger than himself. He became a figure and an icon to the gear head youth and no movie can live up to the man that he was. No, I didn’t know Paul Walker, and maybe he wasn’t that great of a guy, but I’ve never read an interview, seen a late night show, or read a quote by him that didn’t reflect a positive and great person beyond the acting.

In the movie, Vin Diesel says he won’t say goodbye, and then leaves Paul Walker where they said he belongs, with his family. Moments later, Walker pulls up along side Diesel and shouts something to him. The two drive off, as images a tribute to Paul begins. The road forks and Walker takes off on his own path.