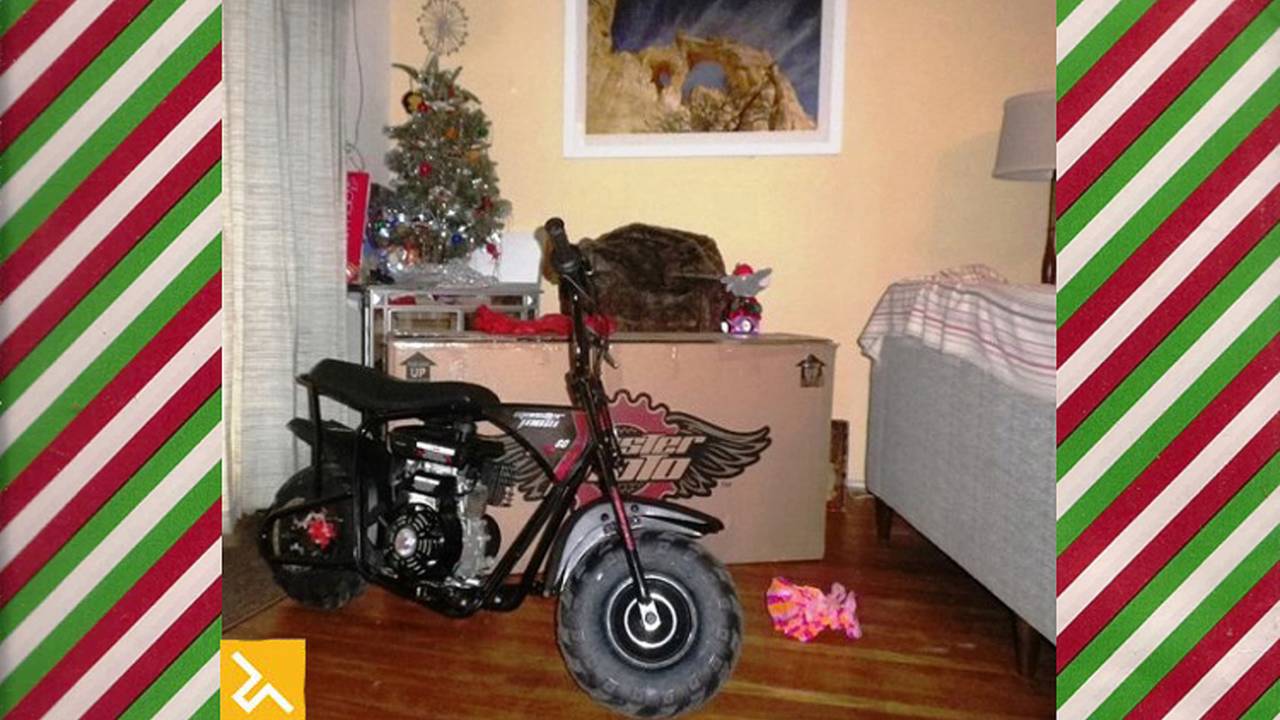 This is how you stick a motorcycle under the Christmas tree for your favorite young rider. Unboxing the Monster Moto Mini is one way to start.

After sharing my experience playing with and testing the first batch of mini bikes and go-karts from Monster Moto they agreed to send us a bike for long term use. Not only does this give us a community pit bike and plaything, it allowed me to experience the process of shipping, unboxing and setting the bike up so it could be shared from start, to finish. So, here goes...

I wasn't home to meet UPS when they dropped it off, but I came home to a huge box on my doorstep. The bike weighs a little more than 80lbs, but the box is so big and bulky that it's not too easy for one person to move without a little help. IF you want one, you probably still  have time to order one here for Christmas.

The good news is that the big, ugly cardboard container would make the perfect huge surprise under any tree for Christmas if it was wrapped accordingly. The Monster Moto logo is in a few places on it, but cover that up with some strategically-placed bows and wrapping paper and no one can tell what is inside. Is is a pony? Is it another kid brother? Is it a WMD? You'll have to wait until Christmas morning to find out! Unless you're me. Im unwrapping this thing, right now.

Once the box is opened, it is pretty easy to see the awesome gift inside. It isn't packed in a million peanuts, or a 100 yards of bubble wrap, but it is held firmly in place by a couple of large cardboard pieces. Make sure to inspect your mini for damage that might occur during shipping atthis stage. Mine was fine. The mini moto is light enough that you can lift it right out of the box if you are a manly-man (or woman), but you better have had your morning coffee, or better yet, get your kid to grab a side and help uncrate it.

The bike inside is about 90% assembled. All you really have to do is bolt together the handlebars, triple clamp and number plate. The side body panels were already on mine when I got it which means the mini is dang near ready to roll righ out of the box. A tool kit is included, but they are pretty cheaply made. I broke the included screwdriver immediately and the spark plug socket is too long to actually fit, so it's sort of a moot point.

The side panels (where the gas tank would be on most bikes) just snap in place with no need for using any tools, if they aren't already there. The front number plate has a couple of screws that need to be screwed in. The handle bars already have the throttle, brake, and kill switch attached. Four bolts go down through the clamps, with a nut attaching on the underside which holds them in place.

And there you go. From taking the bike out of the box, to having a fully assembled Monster mini takes less than about ten minutes. Make sure to check the oil and that the tires are inflated so you don't seize the engine or experience any handling issues on your trial run. Also, its a good idea to make sure that the brakes work, and of course you have to add gas in order to get it to run. Once this baby was gassed up it started in about five pulls.

Voila, you just followed me through the process of uncrating a Monster Moto machine. As I said before they are quite a bit of fun and at just under $400 a really inexpensive way to get your kids riding. But, keep in mind these are not hard core bikes; they have no suspension and are intended for light duty recreation. Don't ride them on the street, but do respect that you can get hurt even at their relatively modest 20+mph top speed. Wear a helmet.

That being said, they are ten times better then the home built mini bikes we had back in the 1980s. Now, be safe and have a happy holiday season out there.