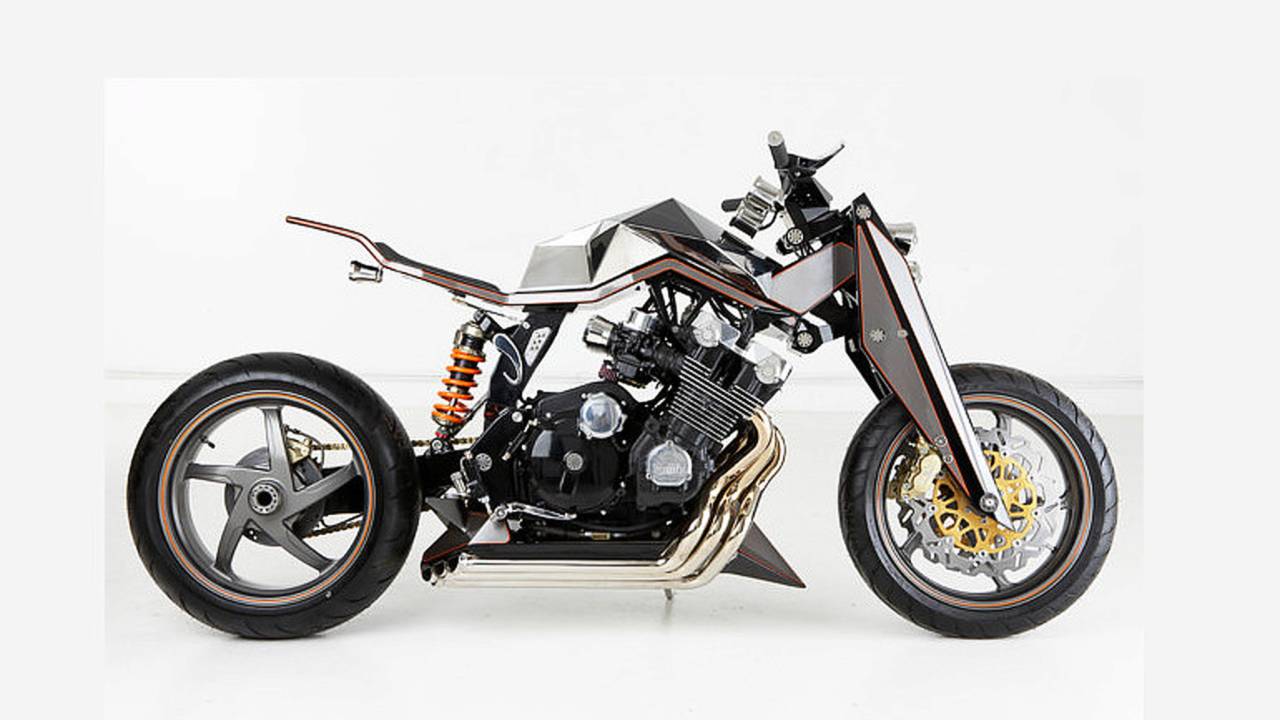 Lamb Engineering took the engine out of an '83 Honda CBX, slapped it in a custom aluminum-origami frame, and called it the Wide Boy.

Larry Houghton delivers a truly exception six-cylinder beast for this week’s Bike of the Week.

Motorcycle historians and riders of a certain age may remember the bonkers Honda CBX. First released in 1978, the CBX featured a 1,047cc inline six that produced a very respectable 105 horsepower. Thanks to some clever packaging, the engine wasn't that much wider than a CB750's, and for four glorious years the bike reigned as one of the biggest, coolest bikes on the block. Unfortunately, it was constantly outsold by the smaller, lighter CB900F, and the CBX line was discontinued in 1982.

While it was incredible in its day, and mention of it still elicits a lot of nostalgic praise from old bike nerds, the CBX doesn't seem to have as passionate and prolific an after-market customs scene as its CB750 cousins. That said, if you look hard enough you can find some fantastic one-off CBX builds and today we're going to feature one of them – The Lamb Engineering Wide Boy.

Lamb Engineering is a Salisbury, UK-based shop that was started in a garage in the late 1980’s. The outfit has grown to a six man and one dog operation that – in addition to customs work – offers a wide variety of professional services such as CNC milling and turning, component assembly, chemical blacking, welding, fabrication, and finishing services. The shop regularly competes in the AMD World Championship of Custom Bike Building where the shop has taken home the prestigious top prize and multiple top-three awards.

Wide Boy is the handiwork of Lamb Engineering’s Larry Houghton, a seasoned fabricator and designer. Houghton started the project with the engine out of a 1983 Honda CBX. One the inline six was out of the donor, Houghton got to work creating a bespoke zig-zag frame out of sheet aluminum. The single-piece structure runs the entire length of the bike and functions as its subframe in addition to being the primary chassis.

A single-sided swing-arm was sourced off a Ducati 916 and fitted with 17-inch Marchesini rims from a 996. The build’s front suspension is a Houghton-designed set of Hossack-style forks that are similar to BMW’s Telelever system. On top of the one-off front-end sits a unique, custom-made set of handlebars that share a similar origami-esque visual-theme with the bespoke forks. All of the cables and wiring are internally routed through the handlebars, resulting in a very tidy layout.

The elaborate build now exhales via a one-off, six-into-six system built by Expressive Engineering’s Maf Welch made from more than 20 feet of stainless tubing to create the build’s beautiful hextuple pipe. A geometric dummy-tank was fabricated to cap off the angular frame and hide the build’s electrical bits, and an angular belly-pan-type piece was also added to emphasize the bike's aggressive stance and sharp silhouette. A stacked dual-headlight assembly was dropped into the bike’s front-end, and a matching stacked dual-instrument cluster sits on the opposite side of the forks.

The Wide Boy's  five-stage livery is somewhat understated, made up of neon-orange pin-striping and dusted silver laid on a black base courtesy of Del Whittaker. A small leather strip – tooled by “Scott of Bournemouth” – acts as the CBX’s seat, for lack of a better word, and is obviously more focused on aesthetics than comfort. Along with the frame and bodywork, Houghton took full advantage of Lamb Engineering’s state-of-the-art facilities to machine a set of custom cases and covers for the old inline-six.

The overall fit and finish of Houghton’s CBX is pretty astounding. With so many custom shops it can be hard to produce something that genuinely stands out, but Houghton’s Wide Boy does exactly that. The bike also has the unique ability to look extremely different based on what angle it’s viewed from. With something of a generic formula becoming increasingly common in today’s customs scene, it’s always refreshing to see something this original.

If you know of a bike you think deserves to be RideApart’s next Bike of the Week, drop as a line at info@rideapart.com.