Video of the Day: Why Bikes and Pileups Don’t Mix 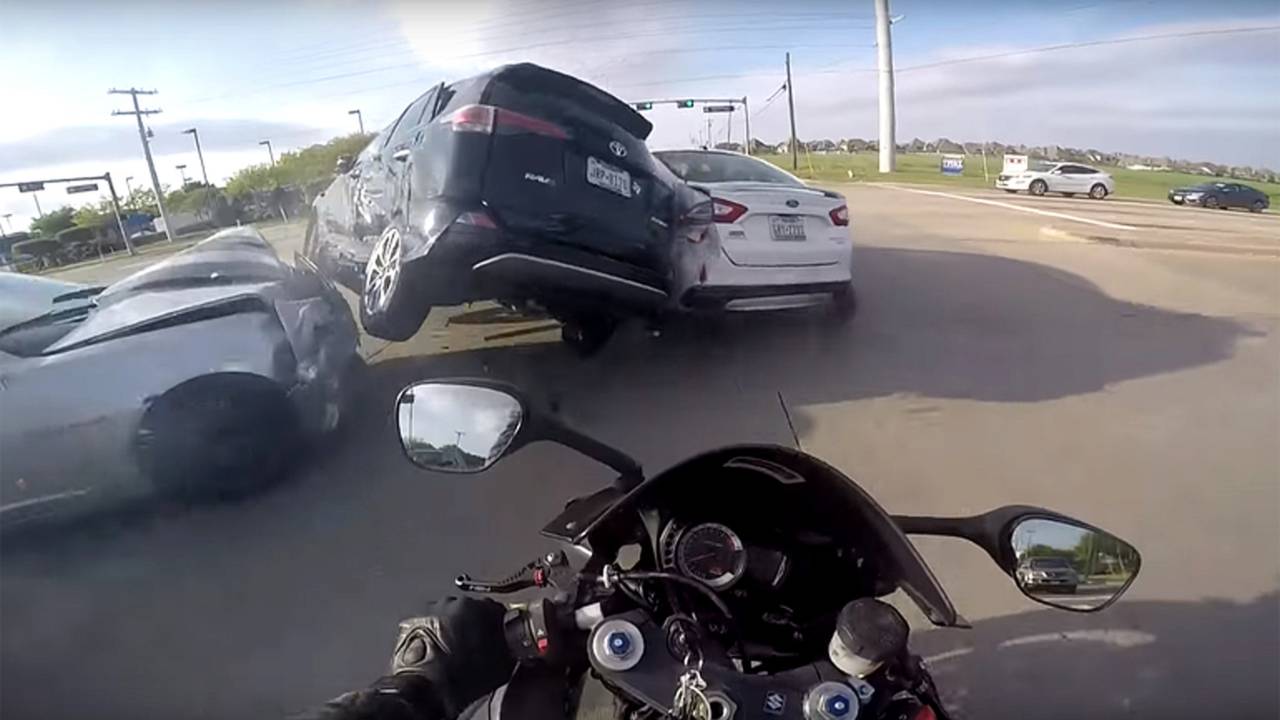 Footage of one sportbike rider's routine daily commute demonstrates how serious trouble can seemingly come out of nowhere in the blink of an eye.

While one can practice safe, defensive, and responsible riding habits, every now and then the road will serve up a serious curveball. That’s exactly what happened to one rider recently after a routine intersection crossing  turned into a multi-vehicle collision. Luckily for us, the whole thing was caught on tape thanks to the rider’s helmet-mounted camera.

EVEN MORE VIDEO OF THE DAY: Bad friends, worse ramps, and an FXR

According to WFAA, Malik Elizee was out for a ride through Plano, Texas the weekend of March 31, 2018. Elizee and a gaggle of cars were waiting at a red light, just minding their own business. The light turned green, the traffic started into the intersection, and that's when everything went completely sideways. A Chevy Camaro blasted through the opposing light and t-boned a Toyota Rav4 at speed, right in front of Elizee. The Rav4 flipped on its side, Elizee slammed into it, and he somehow managed to hang on to the SUV's undercarriage as his bike went skittering through the intersection without him.

Thankfully, Elizee wans't seriously injured in the crash and managed to walk away from it with only a few bruises and a lesson learned. In fact, according to Elizee, everyone involved walked away from the brutal-looking crash.

MORE CRAZINESS ON CAMERA: Don’t mess with a biker in a helmet

"I grabbed so it helped me have better forward momentum," Elizee told WFAA. "As soon as the Camaro hit us, you see my bike fly off so I'm basically in the air. I don't know how to describe what I did, it was almost like I was flailing my legs to kind of run forward to avoid being crushed."

MORE VIDEO OF THE DAY: Rider slides under moving semi

I assume adrenaline probably played a significant role in the rider’s ability to get up right away, and the riders reaction to the craziness is pretty funny, with him seemingly happy to have escaped a deadly situation largely unscathed, though I doubt the same can be said for his bike.