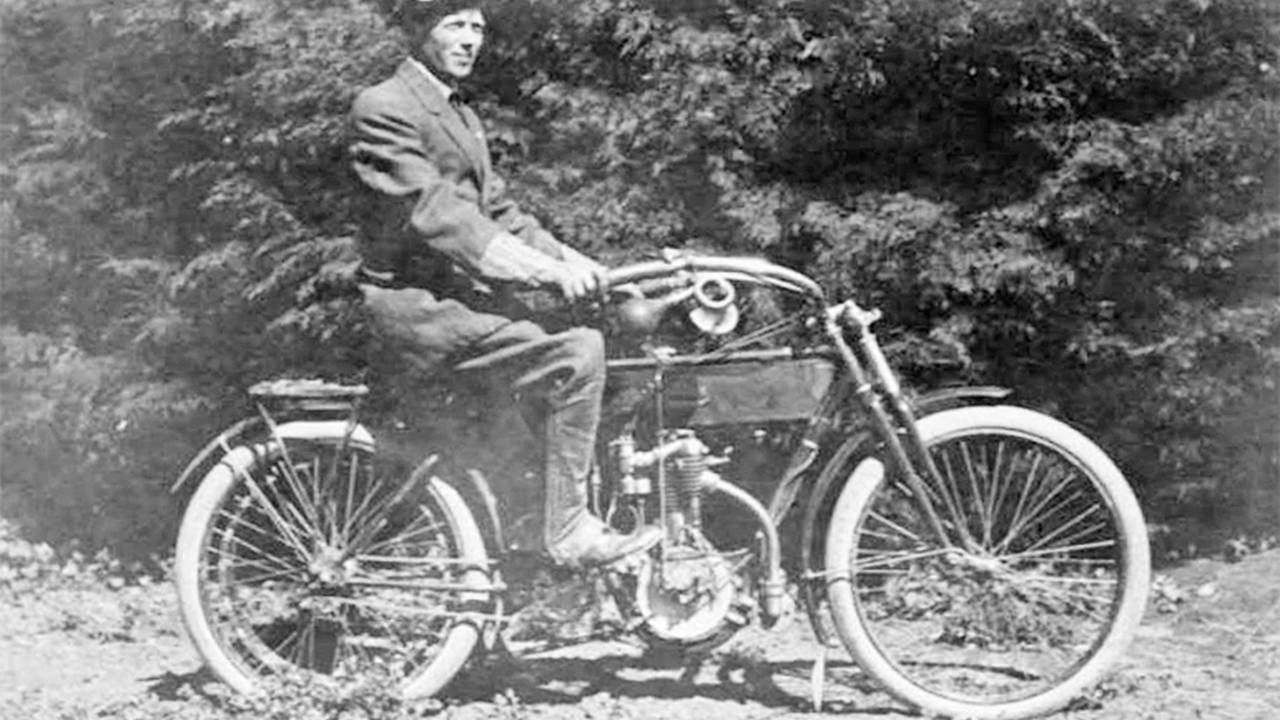 A gentleman's take on the plight of two-wheeled transport at the turn of the century. Welcome to 1912.

A motorcycle is a bicycle with a pandemonium attachment, and Is designed for the special use of mechanical geniuses, daredevils and lunatics. The motorcycle is equipped with a motor small enough to be put in a large pocket and loud enough to fill a coliseum comfortably. This motor is connected with the rear wheels of the bicycle, and when it is in the mood will revolve the wheel with tremendous speed, thus causing the bicycle to proceed from hither and yon over buggies, pedestrians, fences and small outbuildings.

A motorcycle is really a miniature automobile with full sized noise, smell and dirt output. It is not started by cranking, however, but by pedaling the whole machine along the road until the motor emerges from its coma and gets on the job. An automobilist can be detected by his vast overhanging shoulders and calloused hands. A motorcyclist, however, may have arms like pipestems, but his legs are seven sizes too large for him.

A motorcycle is not as comfortable as a camel or a lumber wagon, but it is very swift, and there is nothing that feels more like flying than to ride a large baritone motorcycle over the country roads at 50 miles an hour, leaping lightly from bump to bump—except to leave the machine when it has struck a rock and to soar swiftly through the unstable atmosphere until some jagged section of the United States interferes with further progress.

Motorcycles are very useful and have almost annihilated distance and cheap clothes. They should be ridden in costume, except by very wealthy and careless men. A pair of leather pants with asbestos lining and a two bushel hip pocket for tools, a padded vest, heavy gloves, a pair of goggles, and nose and shin guards make a tasty and useful rig for the cyclist. Dressed in this fashion the enthusiast can enjoy himself to the full as he caroms from tree to tree and gorges himself with dust, oil and excitement.

HOW IT WORKS: The Motorcycle Kickstarter

Motorcycles are not as fatal to pedestrians as automobiles, because they can only run over him with two wheels. But they should be treated with respect at all times and should not be interfered with when in a hurry.

Marvelous records are made by intrepid mahouts who have driven large double barreled motorcycles 90 miles on a board track, and most of the way up the golden stairs in one hour by the clock.

Motorcycles are much cheaper than automobiles, and there seems to be no practical remedy for this, and the industry is unfortunately not in the hands of a trust. A good machine can be purchased for $150. However, if the devotee does not possess $150 he can get almost as good results by drinking a little lubricating oil, inhaling a vacuum cleaner and setting off two bushels of firecrackers between his legs.

1912 Peerless Jr. Motorcycle advertisement. Yes, it really was under $150.

This article originally appeared in the San Francisco Call on June 10, 1912.

Did you enjoy this vintage reportage? Let us know in the comments below, and we'll see about bringing you more golden nuggets from years past.