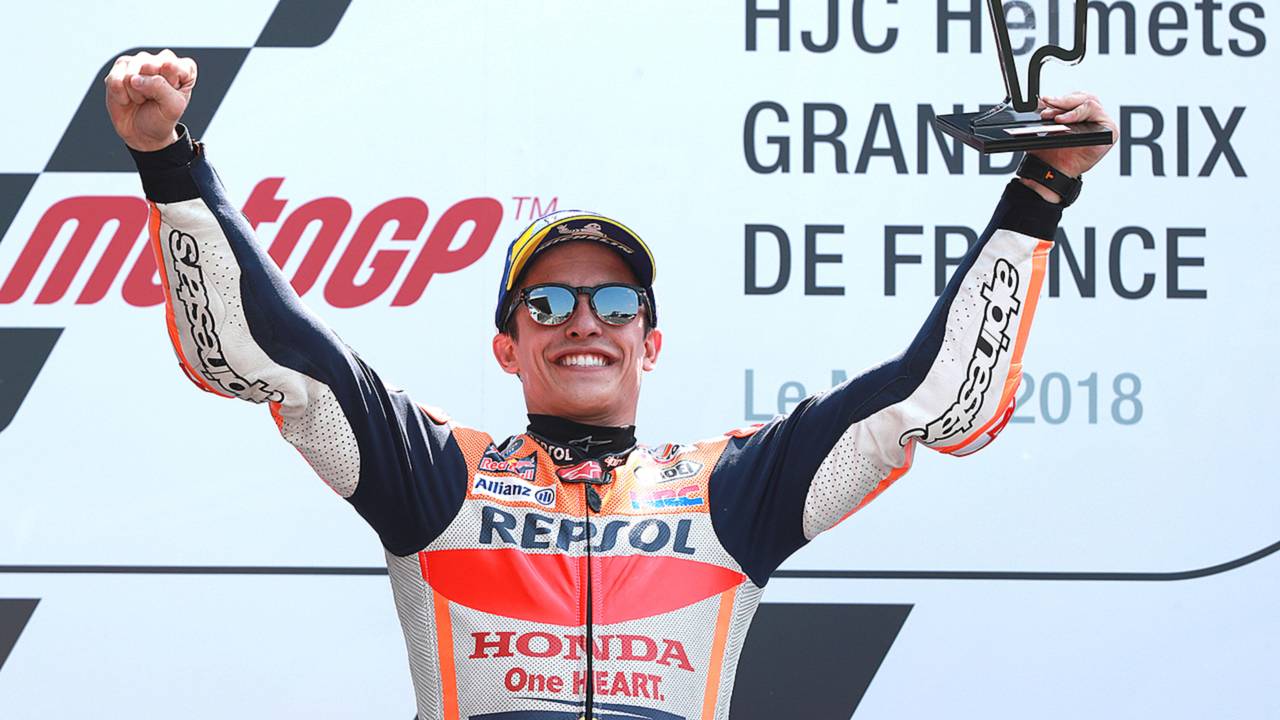 Marquez's win now puts him in a comfortable 36 point lead for the season while the grid behind him struggles with crashes and drama.

Marc Marquez extended his MotoGP points lead with a relatively straightforward victory in the French Grand Prix at Le Mans, helped by crashes for Andrea Dovizioso and Johann Zarco

Honda rider Marquez now has a healthy advantage of 36 points at the head of the table following a victory that looked in little doubt after his two main rivals dropped out of the running.

Marquez had slumped as low as sixth at the start of a tough opening lap, as Jorge Lorenzo vaulted from sixth on the grid into an early lead over poleman Zarco and Dovizioso.

By the end of the second lap, Marquez had recovered to fourth, joining a four-rider lead group.

Dovizioso picked off home favourite Zarco for second place at the downhill La Chapelle right-hander on the third lap, and had just passed Lorenzo to take the lead at the start of the fifth lap.

But as the lead group plunged into La Chapelle once more, Dovizioso lost the front end of his factory Ducati and slid into the gravel, forcing his second retirement in as many races.

Three laps later, while defending second from Marquez, Zarco suffered a similar fate to Dovizioso as he fell at the Garage Vert double right-hander, ending his hopes of a maiden MotoGP win.

That left Lorenzo with a narrow lead over Marquez, but it was clear that Marquez had superior pace to the sole remaining works Ducati man, and the inevitable pass came at La Chapelle on the 10th lap.

Danilo Petrucci, promoted to third by the demise of Dovizioso and Zarco, managed to follow Marquez past Lorenzo on the next lap at the Musee left-hander, but couldn't mount a challenge for the lead.

Marquez was able to reel off the remaining laps and claim victory by a final margin of 2.310 seconds.

After being passed by Petrucci's Pramac machine, Lorenzo couldn't stave off Yamaha's Valentino Rossi, who moved ahead at La Chapelle to claim his first podium finish since the Qatar opener in third place.

Lorenzo then surrendered further places to the second Pramac Ducati of Jack Miller and Dani Pedrosa on the second works Honda, ending up sixth, 10 seconds down on Marquez.

Maverick Vinales had been running as low as 13th in the early laps on his works Yamaha but managed to recover to seventh, a further 13 seconds back, while Cal Crutchlow (LCR Honda) passed Aleix Espargaro (Aprilia) on the last lap to grab eighth after his huge qualifying crash left him in doubt for the race.

Completing the top 10 was the surviving Suzuki of Alex Rins, whose teammate Andrea Iannone crashed out on the opening lap at La Chapelle.