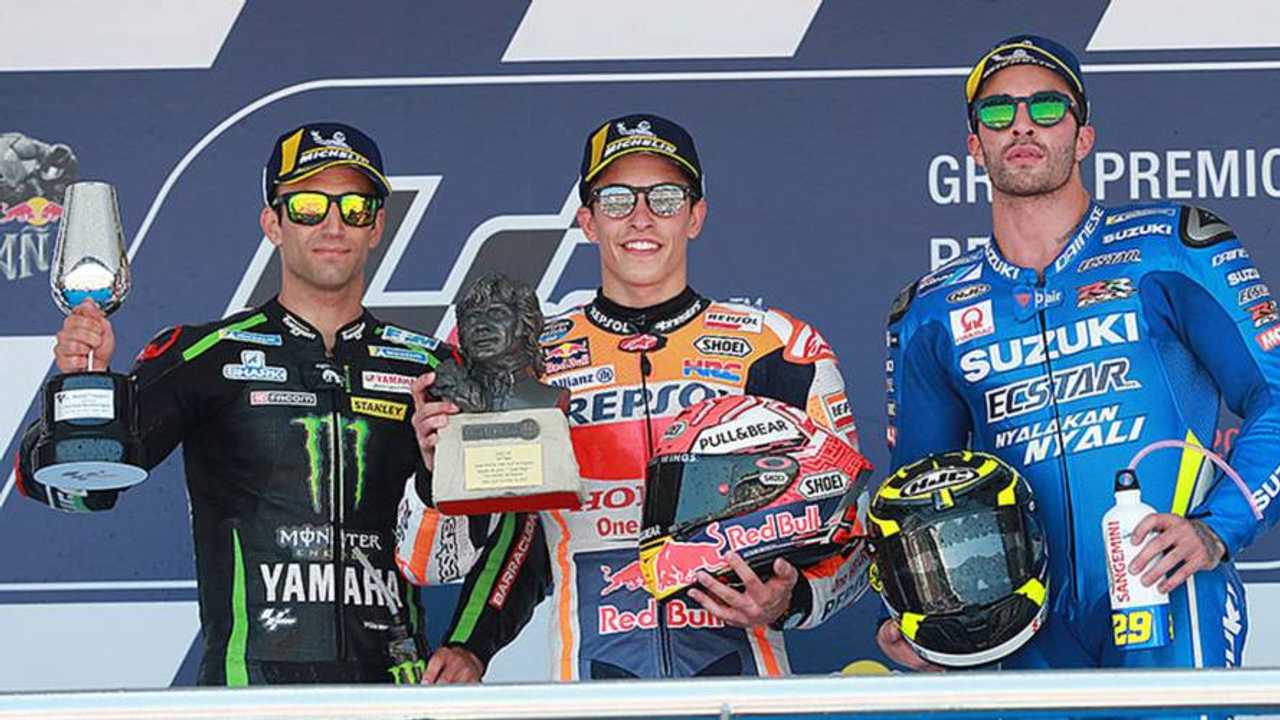 Marquez dominated the MotoGP race in Spain, as Pedrosa and Ducati works riders Dovizioso and Lorenzo came together in a huge crash.

With Marquez breaking away out front, Dovizioso and Lorenzo were battling for second place towards the closing stages of the race, with the incident triggered by the Italian diving down the inside of Lorenzo at the Turn 6 right-hander.

He looked to have completed the pass but ran wide, with Lorenzo cutting back to the inside to retake position.

Yet as Lorenzo moved to the right, he clashed with the Honda of Pedrosa, who had tried to pass the battling Ducatis in one fell swoop.

The contact threw Pedrosa high into the air off his bike and sent Lorenzo's GP18 right into the path of Dovizioso, with all three retiring on the spot but managing to walk away seemingly unhurt.

PREVIOUS RACE: Austin GP at Circuit of the Americas

Lorenzo had been the only frontrunner to pick the soft front tyre, and used it to great effect initially, making a lightning getaway from fourth to lead into Turn 1.

He kept Pedrosa at bay in the early going, and then fought off Marquez for several laps after the reigning champion had slid down the inside of his teammate at the fast Turn 11 right-hander.

By lap eight, however, Lorenzo's defensive resolve weakened, and he finally ceded the lead to Marquez – while, right behind them, Dovizioso worked his way past Pedrosa.

The top four, having already broken away from the rest of the pack, remained close for a couple of more laps, but Marquez soon began to stretch his legs, undeterred by a massive slide through the gravel at Turn 12, left there by Tom Luthi's crash.

As the leader began to disappear into the distance, Dovizioso was growing impatient behind Lorenzo and had to back out of a move at the final corner that briefly dropped him behind Pedrosa.

When all three were collected by the crash later on, Tech 3 Yamaha's Johann Zarco was promoted into a comfortable second, despite having seemingly struggled in the early going.

He finished five seconds behind Marquez, who showboated through much of the final lap.

The Suzuki rider, whose teammate Alex Rins crashed out of fifth at Turn 11 early on, finished a few tenths ahead of Petrucci and Rossi to clinch his second consecutive third-place finish.

Behind Miller, Vinales worked his way past Nieto Ducati's Alvaro Bautista to claim a seventh-place finish, having dropped well outside of the top 10 in the initial running.

Poleman Cal Crutchlow dropped back to fourth with a slow getaway, and the LCR Honda rider held that position until he fell at the Turn 1 right-hander, retiring from a second consecutive grand prix.

Nieto Ducati's Karel Abraham crashed at the same corner later on, while Aprilia's Aleix Espargaro had pulled up shortly after the start with what looked like a mechanical problem.