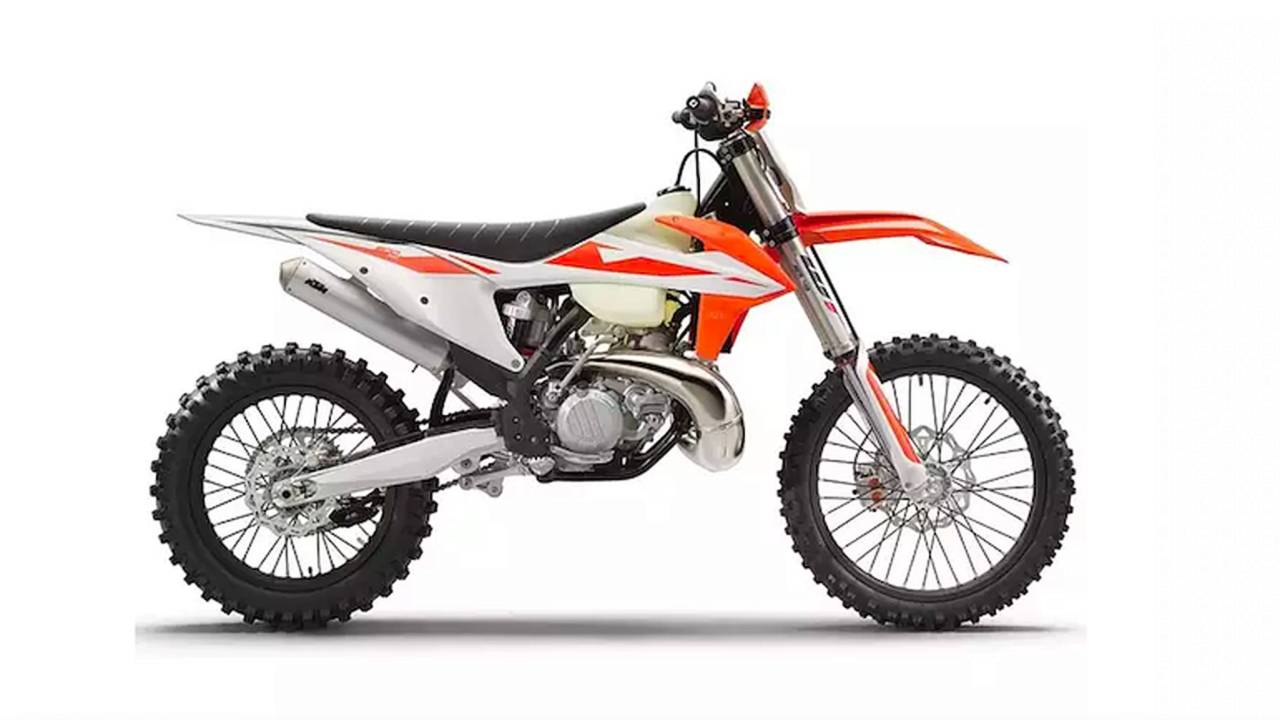 KTM just announced details and changes for its new 2019 model year off-road range. The 250 XC, 300 XC, 250 XC-F, 350 XC-F, and 450 XC-F models have again been tweaked, getting updated frames, retuned suspenders, and modified engines. All of the XC and XC-F bikes utilize a new chassis boasting increased longitudinal and torsional stiffness, as well as new, more rigid triple clamps. The updated frames come equipped with new frame guards and the swing arm was reworked so it can now be set 5 millimeters further back. The WP AER 48 front end has also been reworked to improve performance, getting an updated main piston and new settings for 2019.

The center of gravity on the bikes is lower thanks to radiators mounted about a half an inch lower than on previous models. Another radiator change for 2019 is the updated coolant tube which is incorporated into the frame triangle which now sports a slightly bigger center tube, enlarging the cross section and bolstering coolant flow efficiency. The airbuses and bodywork on the XC's and XC-F’s were also redesigned to optimize airflow to the engine.

Some other tweaks were to the models’ ergonomics, subframe, and plastics, including a reshaped tank which allows for a better riding poison while keeping the engine cooler. A new longer subframe makes the rear fender more stable, and the stylish new stock seat has a very aftermarket look to it. The bar pad and cover were revised as well, and the updated bodywork is adorned in a new graphics package.

The 2019 XC bike engines have been raised slightly in the chassis, which supposedly increases front end traction. The engine hangers on the two-strokes are now aluminum instead of last year’s steel units—a change that’s said to increase handling while lessening vibration. The two-stroke mills also get new carb settings that are said to bolster throttle response. New machined exhaust ports give the XC’s better power delivery compared to 2018’s models, and the water pump casing has been revised to improve coolant flow.

The exhaust system on the 250 and 300 XC’s get new headers for 2019 that offer better clearance and reportedly are designed to better withstand damage in the event of a crash. KTM says the new header pipes also allow the engine to rev a bit higher, and that the mufflers—which are now fixed to the bike via aluminum brackets instead of heavier, weaker plastic pieces—were redesigned for improved power delivery.

For 2019 KTM has added what it calls the “Flow Design Header”, a chamber surrounding the pipe that allows the exhaust to be more tapered in certain areas while also boasting better overall engine performance in a quieter package. The four-stroke range’s mufflers—which are now longer—are adorned in a new aluminum sleeve profile, new end cap, and boast a revised internal design. The bikes’ ECUs have new maps that are more compatible with the updated exhausts and cylinder heads, and supposedly provide better traction control.

Another noteworthy feature on the 2019 XC-F lineup is the addition of the Keihin Engine Management System that features new 44mm throttle bodies and new seals for the Manifold Absolute Pressure (MAP) systems which improve reliability. The machines’ reliability has also been turned up a notch thanks to the addition of new lithium-ion starter batteries which fire the bike up faster and more reliably in cold conditions. The voltage regulator and condenser’s packaging were revised to further improve reliability as well.

The specific models also get a few unique changes. The 2019 250 XC-F gets a new diaphragm steel clutch and Pankl Racing Systems transmission that utilizes last year’s gear ratios and a new exhaust camshaft was also added to improve the power delivery. The 2019 450 XC-F gets a newly designed cylinder head—which has newly shaped ports, new camshaft, and new, shorter valve timing designed to increase responsiveness—that’s more than half-an-inch lower and a full pound lighter than 2018’s model. Lastly on the 450; the cam chain guides are now made of a lower friction material. The 350 XC-F also boasts a revised cylinder head design that weighs almost half-a-pound less than 2018’s unit. Like the 250, the 350 also gets the new diaphragm steel clutch and Pankl Racing Systems transmission.