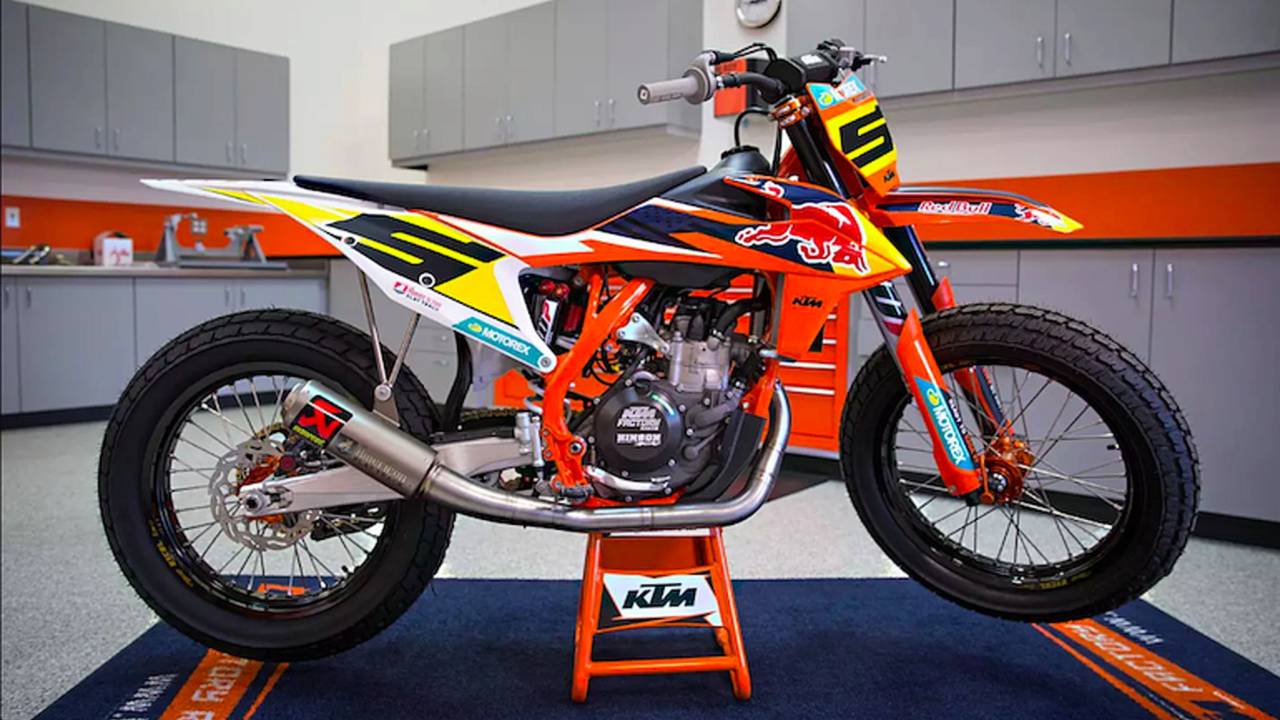 Not content to let everyone else have all the fun, KTM throws its hat in the American Flat Track ring with the killer 450 SX-F Factory Edition.

Americans love us some flat track racing, and manufacturers are well aware of this. Whether it be Harley-Davidson bringing the dirt oval racing overseas to India to promote its brand, or Ducati’s recently announced campaign to compete in the flat track scene, flat track racing is a fantastic marketing tool. So it makes sense that KTM would follow suit, tossing its proverbial hat into the flat track ring for the 2019 season.

Instead of going after the elite Twins Class, the Austrian manufacturer instead opted to get its feet wet by entering the American Flat Track Singles Class. At the 2017 Pikes Peak race, KTM 1290 Super Duke R pilot—and now brand ambassador—Chris Fillmore already helps manage the KTM’s Junior Cup program(s), but will be adding KTM’s AFT Singles team to the list of projects the world-record holder oversees.

“We won’t actually go racing until 2019, because we are starting from scratch and building the team throughout 2018,” says Fillmore. “We started by building the flat track single-cylinder powered motorcycle so that we could show it off and share it with dealers.”

The machine Fillmore is referring to is KTM’s 450 SX-F Factory Edition. Fillmore stated that as KTM’s flat track program blossoms, the company plans on eventually stepping up to the prestigious Twins Class, using a machine powered by the potent parallel twin currently found in the 790 Duke.

“We have been following the changes happening to the racing in American Flat Track and the excitement it’s produced, so as a READY TO RACE company it was natural for KTM to want to be involved,” explained President of KTM North America, John Hinz.

With any luck—and based on the fact the 450 SX-F is already a proven championship winning machine—KTM’s foray into dirt oval racing will be more fruitful than the company’s recent MotoGP efforts.