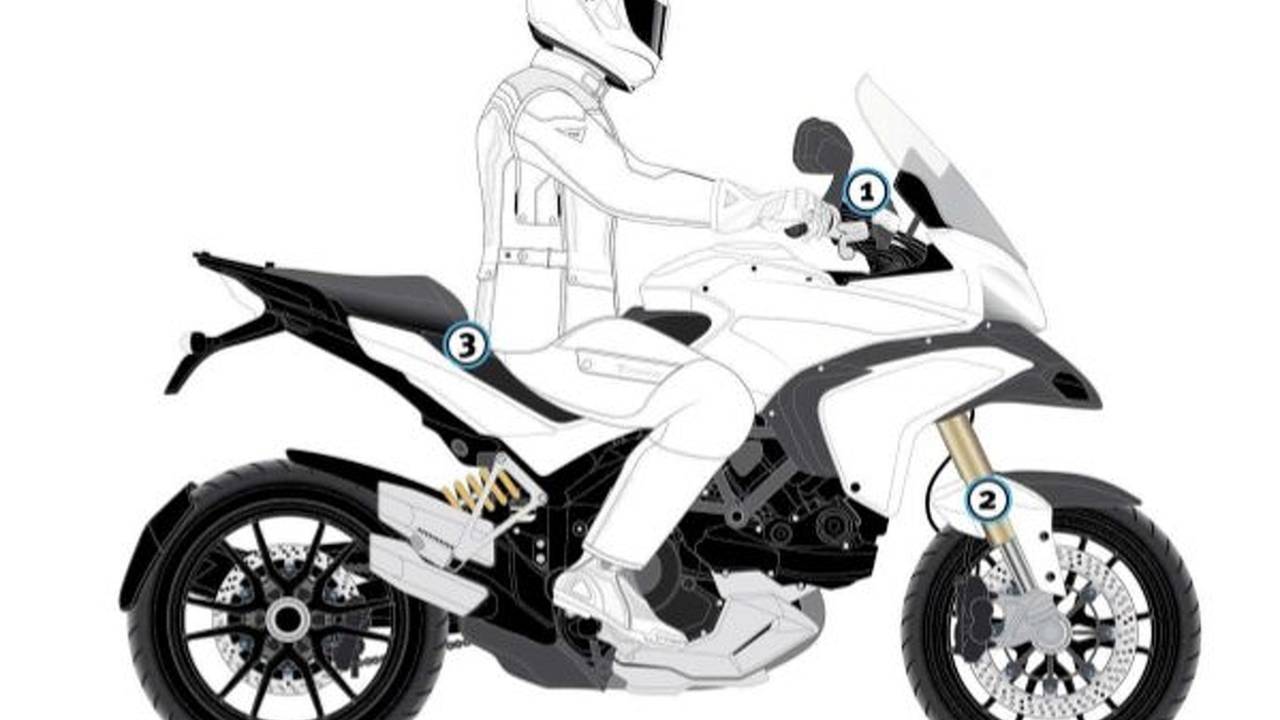 Not just for the track anymore.

Airbags have, for years, been a just-over-the-horizon technology promising to massively elevate impact protection. Top-level road racers are just now taking advantage of the Dainese D-Air and Alpinestars TechAir systems, but as yet, only rudimentary systems requiring a lanyard connection to the motorcycle have been available to road riders. With the releases of Dainese D-Air Street, motorcyclists will benefit from a 75 percent reduction in impact forces to the back over a CE2 back protector and an 89 percent reduction over a CE chest protector. D-Air Street also helps prevent hyperextension, hyperflexion, and compression of the neck, all while inflating in as little as 45 milliseconds to guard against frontal impacts. This is the next level of safety.

As you can see, that’s a far, far more complicated, sophisticated setup than the primitive airbag vests that have been on the market for a while. Those work like the kill switch on a jet ski or quad, requiring you to separate from the machine, physically pulling a switch that triggers inflation. The problems with that setup are obvious: impacts can occur without you leaving the bike and the potential for accidental inflation is huge. With D-Air Street, those accelerometers mounted on the furthest-forward part of the bike — the lower forks — can detect an accident and trigger inflation in .025 seconds. ie before you even know you’ve hit something. There’s zero potential for accidental inflation, D-Air Street’s connection between user-worn garments and the ECU is completely wireless.

Why is there a need for a wearable airbag on the road?

According to the Motorcycle Accidents In Depth Study, the most frequent road accident for motorcycles is impact with an automobile. Those account for 60 percent of all accidents. The time between the motorcycle impacting the car and the rider hitting is just .08 seconds. After the head (which should already be protected by a helmet), the most frequently injured body parts in those accidents are the chest, abdomen and back. As you can see, D-Air Street inflates to provide comprehensive coverage of the chest, upper abdomen, collar bones, neck and the entirety of the back. This area of coverage is remarkable, expanding safety away from small bits of body armor to nearly the entire upper body.

No. The lean angle sensor mounted under the seat will detect falls or slides, again triggering inflation and providing all the above protection, again in an incredibly short time

With a wireless connection, is the airbag subject to interference?

Dainese claims it’s not, employing a continuous radio signal connection between the wearable unit and ECU to eliminate the potential for interference. With no existing certification processes in place, Dainese actually worked with Germany’s super-strict TUV certification program to develop a set of standards for wearable airbags. Over 800 tests will look at the following areas:

Can D-Air inadvertently hurt me or my passenger?

Dainese has tested the system in a variety of circumstances that could hamper inflation or cause injury. Wearing a backpack? D-Air will still inflate. When it does inflate, it won’t impact your helmet in such a way that could cause whiplash. A pillion sitting close to you? The bag won’t throw off their grip or unseat them or cause injury if it impacts them during inflation. Sitting flush to a top box or other luggage? The bag won’t throw you off.

How do I install and operate D-Air?

Dainese will handle installation at their D-Stores, the only places D-Air will be available. Once installed, you need to handle battery charging and installing a SIM card. The battery in the jacket or vest lasts 30 hours and recharges via USB. Simple. The SIM cards handle communication between the ECU and the rider and passenger. The garments then “mate” with the ECU so yours doesn’t accidentally inflate that of another so-equipped rider near you. That cockpit unit displays battery charge levels, system activation and warns you if something’s screwy. The airbag unit itself can also vibrate if it needs to tell you something.

What can I wear D-Air Street with?

Initially, there’s going to be a Gore-Tex jacket and a vest available (no US prices or availability dates yet). That jacket is turn-key, incorporating a back protector and all the usual armor. The vest gets worn over existing jackets or leathers; you can still wear traditional static back and chest protectors and other armor underneath it.

D-Air Street isn’t going to be for everyone. It’s going to be expensive and it is going to require installation on your motorcycle/s. You will need to recharge batteries and generally be responsible for putting it on and taking care of it. But, for those riders who use motorcycles as their primary means of transportation and take safety incredibly seriously as a result, this is going to make them massively safer. Once installed, operation requires virtually no user input and the area of coverage and level of impact amelioration are both huge. 75 percent safer than the safest existing back protectors? I don’t know about you, but I’d like to know that I’m not going to break my back or destroy my heart/lungs in a crash and I’m prepared to pay for that added safety.