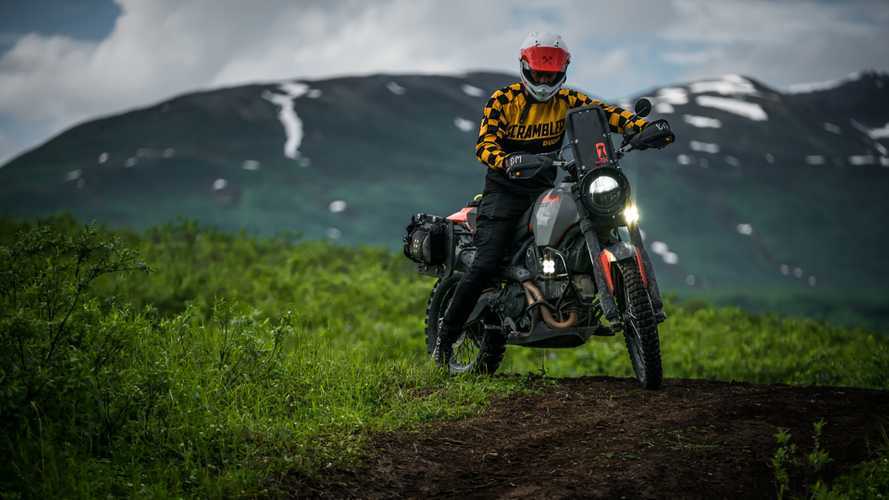 The Ducati Scrambler is more than just a pretty face. Don’t be fooled by its preppy looks—true to its name and to the legacy that comes with it, the Scrambler has some serious off-roading chops.

What happens when you push the off-road envelope even further and turn a Scrambler into an ADV? Magic.

The folks at Earle Motors have a knack for modifying Ducatis. All the projects the feature on their website are cool-looking, Ducati-based customs. Its most striking custom—at least to my ADV-partial eyes—is the Alaskan, an epic-looking Scrambler-turned-adventurer the team completed in 2018. There’s no expiration date on awesomeness.

While the standard Scrambler is already a capable off-roader, Ducati took things a step further when it introduced the Desert Sled in 2018. Armed with knobby tires, a reinforced frame, and an adjustable Kayaba suspension, the Scrambler’s desert raider offered the perfect base for Earle Motors’ Alaskan custom project. The team explains on its website that it chose the Desert Sled for “its heavily strengthened frame, longer Swingarm and taller suspension as well as the simple air cooled 800.” Who can blame them, that 800 L-twin mill is a hoot.

The Alaskan from Christopher Thoms on Vimeo.

They swapped the factory fenders and fuel tank for components they built, including a hand-formed 6-gallon tank to replace the 3.57-gallon one. They also added a 2-gallon auxiliary tank in the tail. They added a swingarm extender, a windscreen, a Kevlar sump plate, 21 and 18-inch front and back wire-spoke wheels, crash bars, a luggage rack, and voilà. You have an adventure-ready Scrambler on your hands.

The team even took the bike on a road trip to Alaska to put it through its paces. I don’t know for you but you can sign me up for a Scrambler 800-based ADV. Now, if only Ducati actually produced the Desert X.