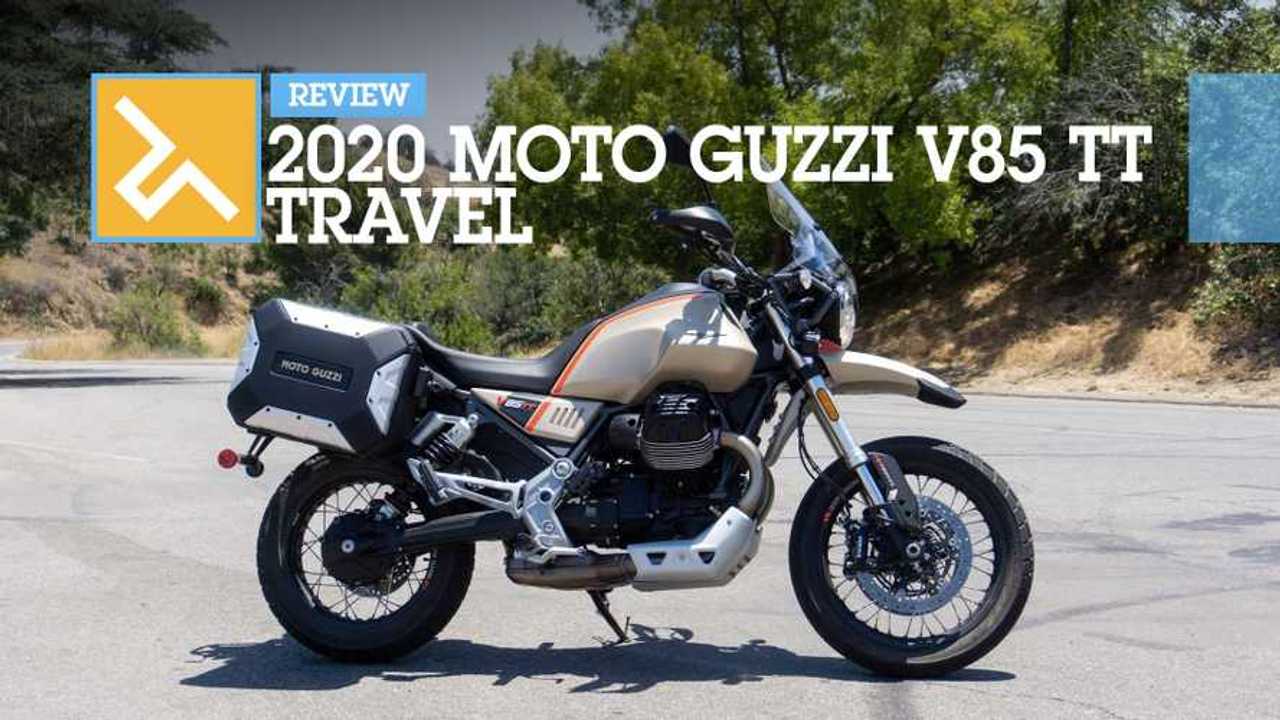 The V85 TT has been turning heads since Moto Guzzi unveiled the concept at EICMA 2017. Capitalizing on the positive reception, the house of Mandello Del Lario ushered the “classic enduro” into production without skipping a beat. An endorsement from world-renowned adventurer Ewan McGregor and our own adventurer extraordinaire Sabrina followed close behind. With the new Goose racking up critical acclaim, consumers happily converted to Guzzistis, helping Piaggio end 2019 in the black.

Despite the instant success, Moto Guzzi didn’t rest on its laurels. Late last year, the brand improved on the winning formula by introducing the up-spec V85 TT Travel at EICMA 2019. Featuring heated grips, panniers, and a taller windscreen, the new variant was ready for adventure right out of the box. Even with the added functionality, Moto Guzzi amplified the model’s style with a gorgeous Sabbia Namib paint job. When the brand beckoned with an opportunity to test the new Travel variant, it’s safe to say that I was beyond enthused.

I knew V85 TT Travel was going to be a comfortable ride as soon as I swung a leg over the bike. From the footpeg position to the wide handlebars, the layout fit my five-foot, ten-inch frame perfectly. Even with the cylinder heads poking out from under the gas tank, the rider's knees can comfortably tuck into the tank cutouts. I only occasionally became intimate with the rocker covers under heavy braking, but it never became a problem.

With the feet under the knees and an upright posture, the V85 feels like it can ride for thousands of miles. Due to the 32.6-inch seat height, many users should be able to flat-foot the bike at stoplights and the plush cushioning only increases the ride comfort when one's feet are on the pegs. For those in colder climates, the handguards and heated grips will thoroughly pamper your palms.

Of course, a major source of long-distance fatigue results from wind buffeting, and the taller windscreen helps harbor the rider from the elements. Moving at posted highway speeds, the Travel windshield redirected the majority of the oncoming wind. Due to the extreme turning radius of the V85, the designers had to cut out sections of the deflector to accept the handlebars. For that reason, more turbulence is detectable at shoulders and head at speeds over 85 mph. Aside from that minor gripe, the V85 rivaled many baggers in the comfort department.

If you’re going to put “Travel” in a bike’s name, it better be able to cover long distances and handle a variety of terrains. As a resident of Los Angeles, the nearest off-highway vehicle (OHV) trails are more than 40 miles away. Luckily, the V85 TT’s manners made riding to the trails a breeze and riding on the trails pure joy. While the suspension is admittedly soft for spirited on-road riding, its compliancy off-road imbues a level of confidence that most adventure bikes can’t muster. I found myself taking the classic enduro to the dirt at every opportunity, even if it was just a gravel shoulder off a backroad highway.

In that respect, the V85 Travel defied its spec sheet. At 505 pounds and the fuel up high, the bike should feel heavy—but it doesn’t. With 6.7 inches of travel and 8.3 inches of ground clearance, it should easily bottom out—but it didn’t. The 19-inch and 17-inch wheels are supposed to be too small for dirt—but they felt right at home. No, I wasn’t carrying a Dakar-worthy pace or exploring unknown terrain—but atop the V85 I sure felt like I was. It’s a shame that we can’t measure how much fun a bike is because if we could, we would list that at the top of the Travel’s spec sheet.

One could ride the V85 off-road all day with the gearbox in second and ABS disabled at the rear. Unfortunately, getting back on the tarmac is where the adventurer’s attributes fall short. The suspension and tires that made dirt riding so fulfilling felt vague and twitchy on twisty mountain roads.

Moto Guzzi outfits V85 models in road-oriented Metzeler Tourance Next tires or the slotted Michelin Anakee Adventures that come standard on the V85 Travel. Coupling the more dirt-going Anakee Adventures with the bike’s soft suspension delivered vague feedback at the front end. Out back, the preload and rebound-adjustable monoshock was even less responsive. As a result, the bike felt like riding on Jello through some of the tightest sectors.

Over time, I learned to let the turns come to me on the V85. Allowing the bike to do the work revealed its preferences and made the ride much more enjoyable. The mid-size adventurer flowed much better in the corners when abrupt downshifts and quick direction changes were avoided. Heavy engine braking frequently upset the chassis, so taking a swooping, controlled line resulted in a much smoother response from the suspension. Like a horse, the V85 isn't going to bend to the user's will and the best course of action is to ride it the way it likes to be ridden.

Back on the highway, the bike is a different story. Boasting a 6-gallon tank, the V85 easily achieved 220 miles between fill-ups. The ABS and aluminum panniers also featured extensive carrying capacity with a 37-liter volume on the right side and 27.5 liters on the left. The right-side case can even fit a full-size helmet for storage or safekeeping when off the bike. While the panniers hook up directly to the subframe without a mounting bracket, the system can be a bit clunky. With repetition, owners will learn to remove and mount the bags much quicker, but it definitely takes some practice.

The model’s cruise control also made the rest of the trip effortless. With just one button on the left-hand controls, users can activate the system and set and adjust speed. Travels on an adventure bike usually take you through various climates and road conditions, but the cruise control remained a reassuring constant no matter what ride mode the Goose was in. To switch between the three ride modes (Road, Off-Road, and Rain), users press the ignition button twice in succession. While repurposing the ignition switch minimized clutter at the hand controls, its use is counterintuitive to most motorcycling instincts.

While most of the Guzzi’s electronics worked well, the small TFT dash left room for improvements. Critical information like speed, revs, current gear, and the clock was always displayed on the home screen, but you have to use a toggle switch on the right-hand controls to scroll through information like fuel level and average consumption. With more screen real estate, the dash could display all that information and reduce the need to multi-task with one’s throttle hand.

Like most Moto Guzzi (and most motorcycles overall), the V85 is designed around the engine. The Euro 4-compliant, 853cc, transverse v-twin pumps out 80 horsepower and 59 ft-lb of torque. The Italian brand even equipped the air-cooled, pushrod engine with titanium intake valves and aluminum pushrods and cams to help amplify the motor’s performance.

Of course, the engine makes the V85 TT Travel go, but it’s the rest of the package that makes it such a fun bike. From the riding position to the off-road capabilities to the Sabbia Namib paint, the classic enduro finds a way to put a smile on your face. While the TT Travel only improved upon the standard V85, if the next iteration is anywhere near as fun, we’ll be the first in line for another go.