You know the deal with naked bikes: detuned motors, decontented suspension. But what if you want true supersport performance in a package that won't break the back? The Ducati Streetfighter 848 may be that bike.

Speaking at the US media launch of the Ducati Streetfigher 848, North American general manager Dominique Cheraki described his ideal motorcycle — a real sportsbike sans the fairings and equipped with high bars to make it comfortable. The perfect bike for riding fast on real roads, whether they be city streets or mountain curves. That’s certainly not a new concept, but it’s not one that’s ever before been fully realized; in the translation from faired to naked, the handling and performance that makes a sportsbike a sportsbike has traditionally been lost. Is this new Streetfighter finally the real deal? A naked 848 Evo? Not really, but that’s not necessarily a bad thing.

So the Streetfighter 848 is not an 848 Evo with the fairing removed and high bars fitted. I’m scoffing at the idea of referring to its bars as “high.” Instead, it’s a Streetfigher 1098 with a new motor, the suspension from a Ducati Monster 1100 and a few tweaks to make it handle better and look nicer.

Rather than the faired supersport’s 140bhp twin, the Streetfighter uses an 849.4cc version of the Testastretta 11° motor that gives the Multistrada 1200 and Diavel their 15,000-mile service intervals. That 11° refers to overlap between inlet and exhaust valves. That and some other internal changes put the emphasis on low-rev torque and smooth power delivery over the 37° overlap of the 848 Evo motor and its outright, high-rev power. This Streetfighter makes 130bhp at 10,000rpm and 69lb/ft of torque at 9,500rpm. Don’t let the close proximity of those two peaks fool you, this is a flexible engine, check out how broad and flat that torque curve is.

Neither does the Steetfighter come with the $13,995 Ducati 848 Evo’s relatively high-quality, fully-adjustable suspension. Instead, the $12,995 Streetfighter inherits the Monster 1100’s 43mm, fully-adjustable Marzocchi forks and Sachs monoshock, which adjusts for preload and compression damping only. While trying to help me find some damping for that shock, a Ducati tech described it as “limited.” The spring rates front and rear are good, but there’s just not enough compression or rebound damping in either component. Dialing in some more compression on that shock helped, but what I really needed to avoid getting kicked out of the seat over bumps was more rebound, which isn’t available. Without adequate damping, the relatively stiff springs are left to bounce you and the bike around unchecked.

Critically, the rake and trail are sharpened over the Streetfigher 1098. It actually adopts the 848 Evo’s 24.5° rake, increasing trail to 103mm. Combined with a very low 169kg/373lbs (dry)weight and short 58.1 inch wheelbase, the result is an exceptionally agile motorcycle that somehow also manages to be unflappably stable. Steering is precise and there’s excellent communication from both the front and rear tires.

Aesthetically, the Streetfigher 848 gains sharp-looking LED position and brake lights and the body work is tightened up. The result is a cleaner, more refined look than the Streetfighter 1098. I’ve never been a fan of that bike either to ride or look at, but Ducati’s gotten it right this time. With sharp creases, minimal bodywork, strong surfaces and no stupid graphics, it’s one of the few bikes that actually looks good in yellow too.

Like its bigger brother, the Streetfighter 848 gets eight-level traction control and Ducati’s data analysis system, which allows users to download performance data to a USB stick.

It’s also worth mentioning the tires. Pirelli Diablo Rosso Corso tires are seriously nice; the kind of thing you’d put on another bike to improve it. With all the Japanese OEMs cutting costs by fitting shit tires stock, it’s nice to see Ducati actually allowing owners to fully realize the performance of its motorcycles straight out of the showroom by using real rubber. These Pirelli’s stick like glue and experience with them on other bikes has shown them to be relatively long-lasting and good in the rain too. 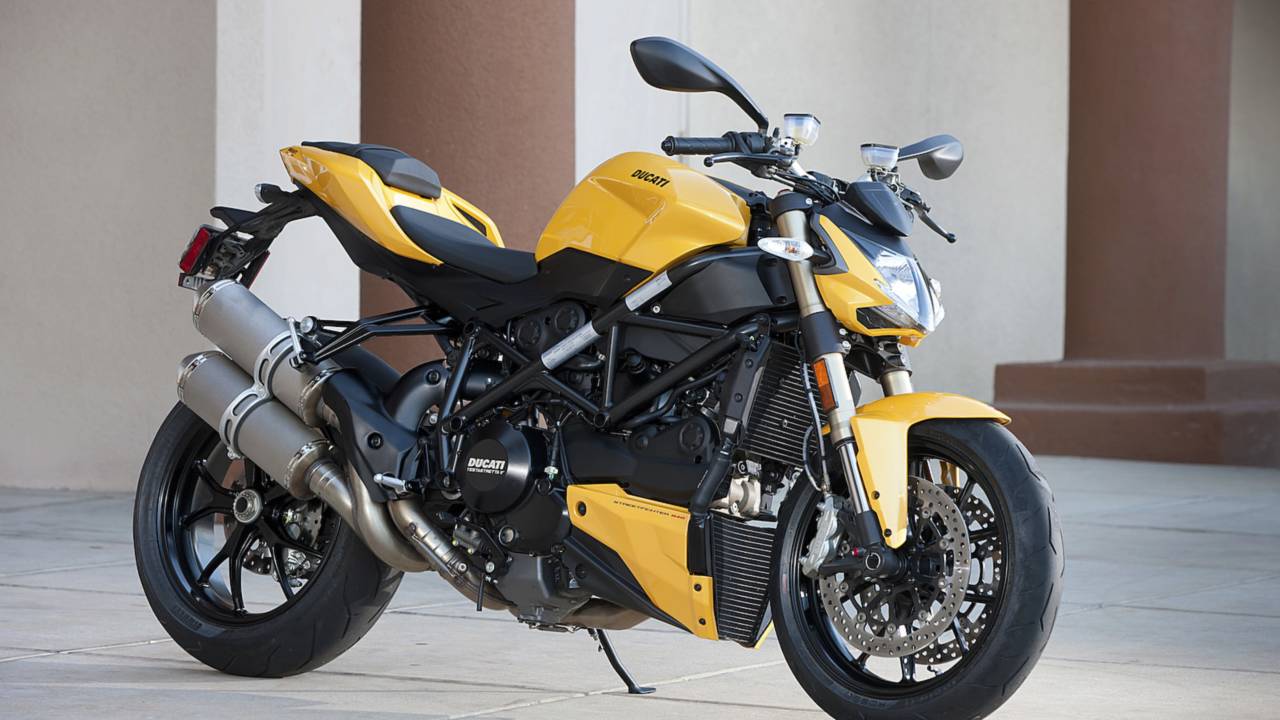 Despite de-contented suspension, compromised ergonomics and less power, that’s somehow still what the Streetfighter 848 is. Leaned way over on a bumpy road, those bumps are going to upset the suspension, but that doesn’t translate to running wide. Once you realize that you’re not going to wash out the front because the spring is bouncing around, you can really push it hard. My best guess as to the reason for this seeming contradiction — too soft damping, but still great handling — is that Ducati’s just nailed the geometry. I really can’t emphasize it enough, this thing is incredibly agile, changing direction or altering lines mid corner faster and better than a supersport 600, but also completely stable; I never got so much as a faint waggle in the bars. It’s handling is absolutely perfect for tight mountain roads.

And yeah, the motor feels blunted in comparison to the 848 Evo, but once you get over missing that peak power, the huge plateau of torque is perfect for driving through and out of corners. Real world, actually fast riding isn’t about rocketing out of corners on full throttle, but more maintaining a fast pace through reducing radiuses, around blind corners and over changes in elevation. It’s in those conditions where a broad swath of usable torque beats outright power, and that’s what this motor excels at.

So maybe not just an 848 sans fairings, but a unique motorcycle in its own right. A very fast one that remains accessible, easy to push hard and is just a ton of fun on real roads. 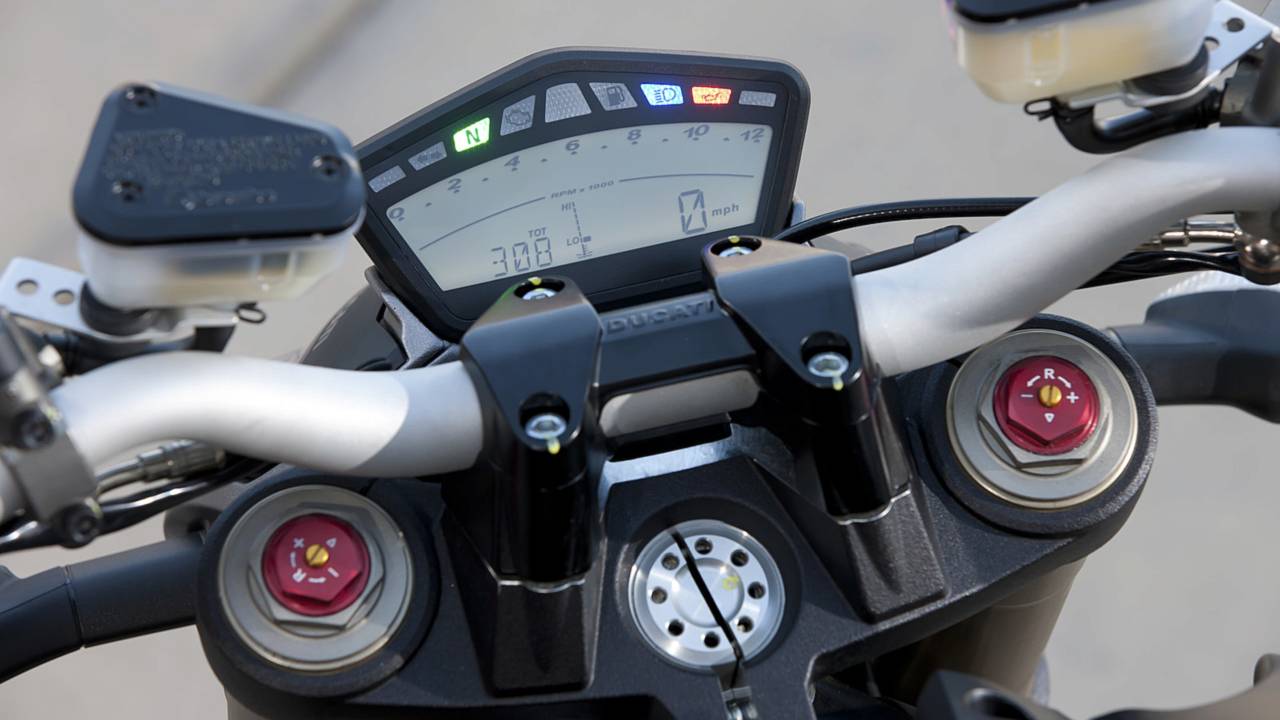 On this new Streetfighter 848, the bars have been raised 20mm and the pegs sit half an inch wider. That 20mm helps a lot, but the bars are still remarkably low, leading to wrist pain in town (obviously), on the highway and even while riding fast on mountain roads.

The footpegs, shared with most other Ducati models, still lack tread and they still sit too close-in, meaning your boots will ride outside their tips. This is a problem for two reasons: 1) even riding in grippy Alpinestars Supertech Rs, my feet repeatedly slipped off the completely smooth peg tip. 2) your boots are going to go down a lot if you’re pulling any serious lean. On the right side, a large piece of black plastic keeps the shotgun pipes from melting your boots, but it also gets in the way of your heel, meaning you can’t really get your foot on the peg all the way while cruising. Riding in town is still going to be absolute torture.

If you’re looking for something exclusively to play with, something to ride in canyons or up and down mountains all day, you’d struggle to do any better than this bike. It’s light, agile and fast, but it’ll make all that accessible to relatively inexperienced riders too. It’d be a great first fast bike for someone coming off an SV650 or a Monster or a great fast bike for people tired of trying to make bikes designed to win races work on the road. Like real world, real road corners? This Streetfigher 848 is the bike for you.