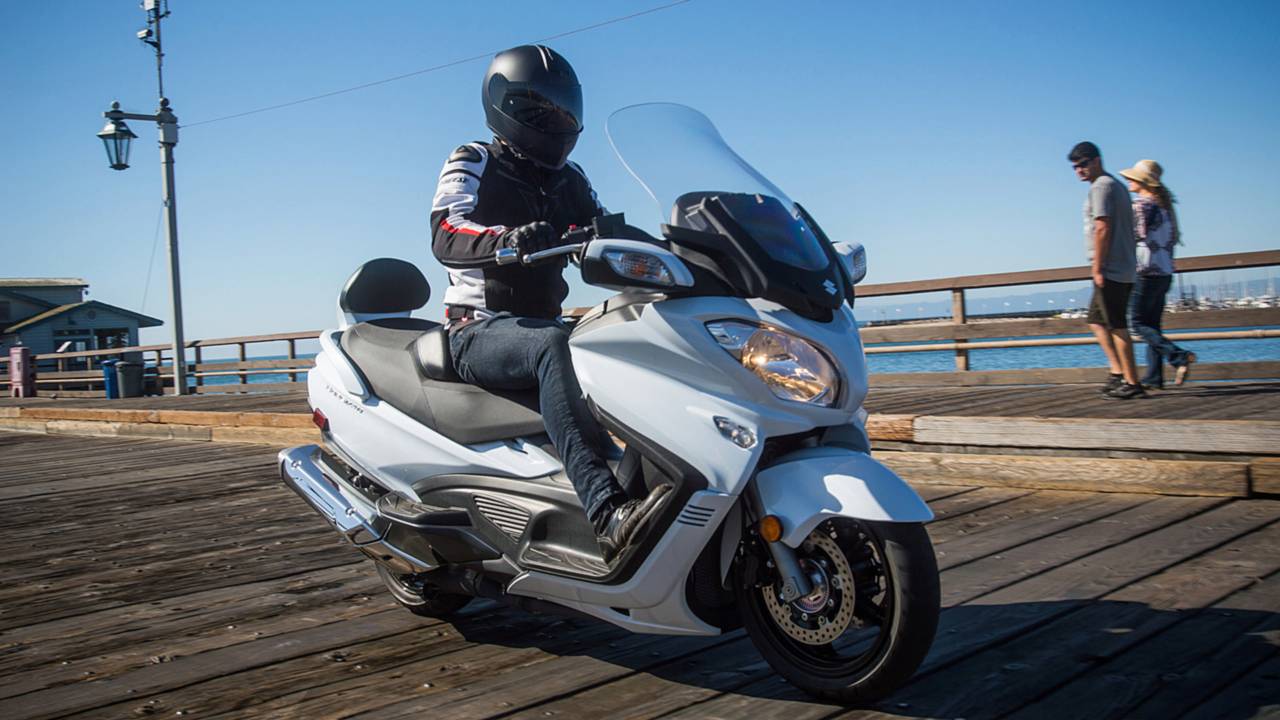 RideApart Review: 2013 Suzuki Burgman 650 ABSTake the ease-of-use of a traditional step-through scooter, then add a motor powerful enough and rider...

Take the ease-of-use of a traditional step-through scooter, then add a motor powerful enough and rider and passenger accommodation comfortable enough to make it as fast and practical as a large motorcycle. Voila, you have the Suzuki Burgman 650, the most expensive scooter on-sale in America.

Rather than a ground-up redesign, this new Burgman is more of an optimization of the old one, originally introduced in 2002.

Suzuki polled its customers for feedback, then did their best to adapt the new bike to their wants and needs.

Due to its unique CVT/conventional clutch drivetrain, the effort needed to push the big Burgman around with the engine off was widely considered to be excessive. To fix that, clutch drag was reduced by 35 percent. That also combined with minor engine changes to improve fuel economy by 15 percent.

Owners also complained of difficult operation at very low speed due to a “shock” when rolling the throttle on and off. To address that, Suzuki reduced engine rpms at that walking pace.

The old model’s instruments were sometimes found to be difficult to read at a glance, or in direct sunlight, so out went the digital speedo and tach, replaced by traditional analog gauges framing a large, central LCD screen for secondary functions. The angle of the bezel has also been changed to create less glare.

In addition to ambient temperature, average and instantaneous fuel economy and all the usual goodies, those instruments also gain an “Eco Indicator” light, which monitors riding behavior, illuminating to inform the rider when they’re riding in an economical manner.

Minor things like the angle and position of the power outlet in the glovebox were also altered based on customer feedback, all in an effort to give existing customers real value in upgrading to the new bike.

Under the seat, the frame is slightly altered to reduce the overall width without impacting storage volume; space remains 50 liters and two full-face helmets in a seat unit that’s now 25mm slimmer.

Styling has also been comprehensively refreshed. Perhaps unsurprisingly, penned buy the same guy who did the new V-Strom 650. Significant influence came from the wind tunnel too, with the intent being reduced buffeting for both rider and passenger.

So all in, what was already the largest, most luxurious scooter on the market has been refined in the pursuit of making it even more so.

Departing Suzuki’s American HQ in Brea, we headed down the 10, through horrible LA traffic, then headed up the Pacific Coast Highway to Topanga Canyon. There, departing from standard launch procedure, we took in some of the low speed neighborhood roads that wind through the Malibu hills.

That the Burgman is a competent lane splitter comes as no surprise. It’s a large bike, but at just 31.9 inches wide (at the electrically folding mirrors), it squeezes through traffic with the best. The very long, 62.8-inch wheelbase takes the most getting used to, steering inputs take some time to carry through to the rear tire. The extremely low center of gravity also requires a bit of a learning curve, your bodyweight and your movements have a larger impact on steering than they would on a taller, larger wheeled, traditional motorcycle.

But how confident and sure footed the 613lbs (wet) bike is around the 5-15mph, super tight, super steep Topanga side roads is very surprising. The transmission holding onto first gear long enough and the engine providing more than enough torque to climb even the steepest grades at a walking pace, smoothly and without drama. Steeing is easy and precise, allowing you to alter lines mid-corner and the ABS brakes sure footed even through the gravel and sand strewn all over these roads.

Out into the more traditional Malibu canyon roads and things remain much the same. While the Burgman certainly isn’t a sport bike, it is confident, planted and easy to ride. Perhaps the nicest thing I can say about it is that I didn’t manage to touch anything down, not the floorboards or the protruding center stand lever, at all. That was with the hand-adjustable preload on stock settings. Giving each of the rear shocks a couple twists — as easy as grasping them with your hand and turning — made the front end a little more confident, but did have an impact on the Burgman’s normally plush ride. We’d only add two clicks for single-person riding, saving max preload for carrying passengers.

Then, it was up the rest of Malibu’s PCH and onto the 101 to cruise to Santa Barbara. It’s notable how at home on the highway the Burgman is. The step-through configuration, large floorboards, spacious seat, tall screen and smooth motor make this as good flying down the fast lane as any touring bike could be, including Honda’s Gold Wing and similar. It’s a shame there’s no stereo.

The styling is sleek and futuristic. Particularly from the rear, where the passenger back rest adds something very Akira-like.

The Burgman is now easy to push, with no perceptible clutch drag to get between you and trying to move a 613lbs scooter.

The frame-mounted motor (as opposed to the swingarm mounted configuration that’s traditional for scooters) lends the Burgman both a plush ride and stable handling.

The electronically adjustable screen moves up and down quickly and precisely, allowing you to instantly tailor it to your height and conditions. It holds that setting even after switching off the ignition and removing the key.

Underseat storage is huge. It fit my packed-to-the-gills Kriega R35 backpack with ease, leaving room for a few water bottles and empty space to spare.

The instrumentation is clear and immediate.

ABS brakes complete with floating calipers bring the Burgman to a commanding, confident halt even in low-traction conditions.

Manual and Power modes allow you to dial in precise performance while passing traffic, climbing hills or just riding fast.

You can cross your legs while cruising down the highway.

Even though it’s adjustable, the little back pad for the rider never goes far back enough to accommodate the very tall.

The Burgman has a myriad of convenience features, but also seemingly a handlebar-mounted button for each of them. Discerning the horn form the signals from the transmission mode from the gears from the mirrors takes some practice.

The Fuel cap is mounted on the downward side when parked on the side stand and too far to the rear to reach while on the bike. So, to refuel, you need to dismount, put the bike on its center stand, open the flap, remove the filler cap, put it somewhere, then repeat all that in reverse when you’re done. It gets annoying real fast.

We only averaged fuel economy figures in the mid 40s over the course of this two-day trip.

“At $10,999, the mighty Burg runs a full thousand dollars more than BMW’s comparable C 650 GT, $1,700 more than Honda’s slightly smaller Silver Wing ABS, and – get this – $3K more than Honda’s new no-shift CTX700 motorcycle. That price point, in fact, sits higher than any other scooter we could find…For that kind of price disparity it’s not unreasonable to expect opulence that floors the competition. How about an audio system with iPod connectivity? Perhaps the aforementioned cruise control? Navigation? Any or all of the above? Sorry, no.” — Motorcycle.com

And this is where the big Burgman runs into trouble. At $10,999, you’d better really want a Burgman because, as Motorcycle.com suggests, it is hugely more expensive than the arguable more desirable competition. That BMW is a top performer, has a great badge and is very sleekly styled. For much less money. A Honda NC700X, even with the DCT transmission, goes for $8,499. Suzuki’s own Burgman 400 can go anywhere the 650 can go (albeit with less two-up comfort and power) for $7,899.

As good at touring as a touring motorcycle and much better in town, the Burgman 650 is a versatile, comfortable, sleek form of transportation. You could ride it cross country just as easily as you could to work and back, five days a week, in all weathers. Maybe not as fast or as fun as a motorcycle, if you’re simply looking for practicality combined with ease of use, you’ll struggle to do better than this scooter.

($88, they don't soak up rain and look nice, but offer no protection)