Looks like Kawasaki's pocket-sized road rocket will punch well above its weight.

Kawasaki’s new ZX-25R continues to surprise us by just how good and capable it is. information leaks show this definitely isn’t your average 250 beginner bike. Now, we’ve learned the engine should be rated for just under 50 horsepower at the crank, making this a surprisingly mean pocket rocket.

Nobody does a better job of keeping secrets than the Japanese motorcycle factories, and Kawasaki isn’t responsible for this information leak. Aftermarket manufacturer Akrapovič inadvertently spilled the beans on this news by publishing a graph showing the ZX-25R's performance before and after installation of a race exhaust. Before installing the exhaust, the Kawasaki’s liquid-cooled four-cylinder engine puts out just over 41 horsepower at the rear wheel. The Akrapovič race exhaust system adds 1.3 peak horsepower at the rear wheel, which doesn’t sound like much. When you’re dealing with a lightweight 250, that boost will be more noticeable, though. 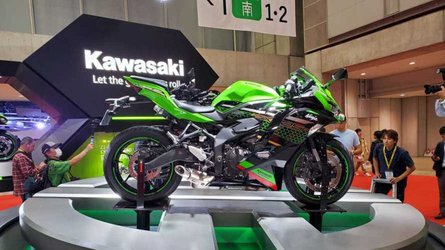 Looking at the graph, you can see the exhaust does beef up the power curve in the lower rev range, which is important for acceleration and everyday riding. The ZX-25R is a screaming, high-performance bike, with a 17,000 rpm redline. That doesn’t mean most riders will want to cruise around at max revs, and these days, OEMs are aiming to make more muscle at lower rpm.

The graph also shows the exhaust makes some minor changes to the engine’s torque profile, but nothing significant. Many riders won’t notice a boost from 15.3 lbs.-ft to 15.9 lbs.-ft. of torque. Again, you’ll see there’s more of a boost in lower-rpm riding. Adding it all up, motojournos are guessing Kawasaki’s new 250 will make somewhere from 46- 50 PS, which works out to about 45-49 horsepower.

As well as boosting engine output, the Akrapovič exhaust will reduce weight, which is always a good thing. We haven’t seen any decibel rating for the new exhaust, but most sportbike riders aren’t too worried about that.

The ZX-25R isn’t the only sportbike on the market aimed at boosting performance in the 250cc segment. Honda’s competing here as well, with its recently-upgraded CBR250RR. However, from the numbers we’ve seen so far, Kawi’s bike is more powerful.