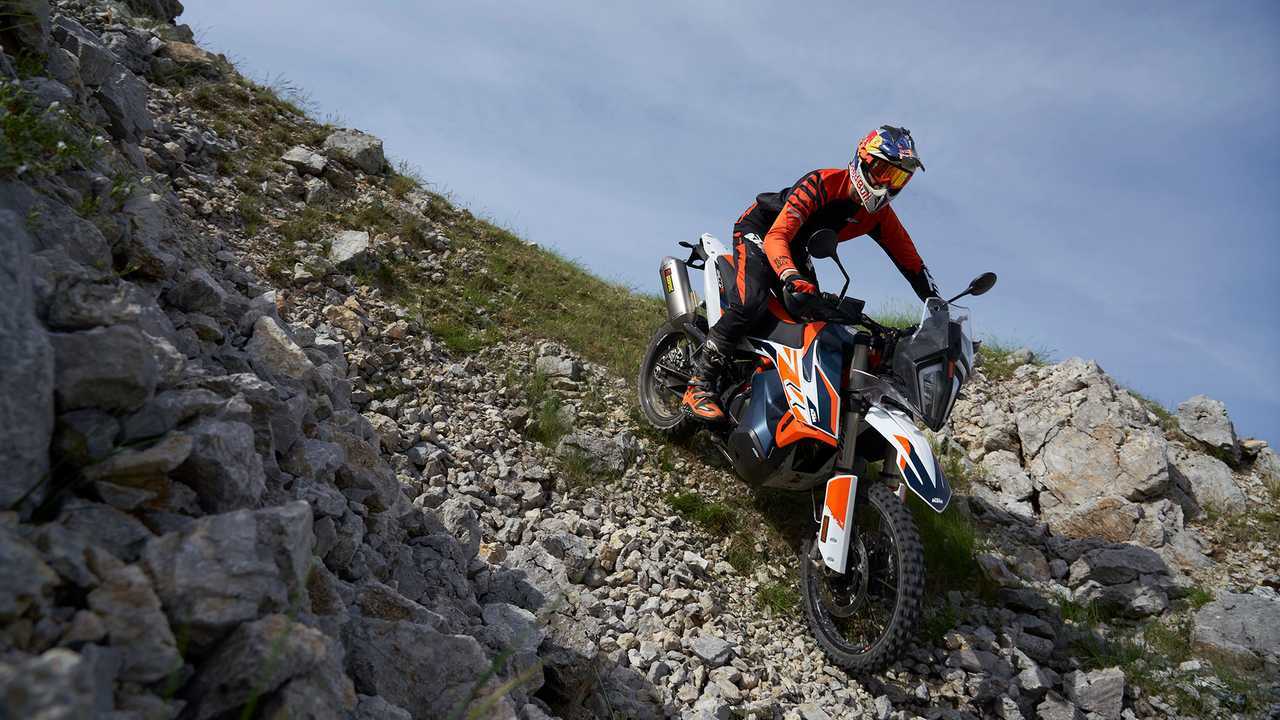 KTM Sure Is Keeping Busy:

KTM describes the new Rally as the “most travel capable rally bike”. Simply put, “this is the machine that will easily cross continents in order to ride to the start line of a rally.” I thought that’s what adventure bikes were for, especially with the new breed of mid-rangers that are giving the segment back its off-road versatility. I guess rally is a pretty sexy new buzzword!

The Adventure R Rally builds on all the features the Adventure R already has to offer, with the addition of more adventure oriented components. The Rally uses the same chromium-molybdenum-steel trellis frame as its R counterpart as well as the same 799cc, 94-horsepower parallel twin mill.

What differentiates the Rally is its fancy WP Xplor Pro suspension that adds 30mm of travel at the front and at the back over the Adventure R’s set up. This adds up to a total suspension travel of 270mm, jacking the seat height up to a towering 35.8 inches which makes the Rally one of the tallest bikes currently on the market.

At the front, the WP Xplor Pro 7548 fork uses a cone valve technology meant to offer unlimited damping and reduce the suspension rigidity. Similarly, at the back, the WP Xplor Pro 6746 shock absorber design is inspired by competition and provides optimal damping with reduced strain for the rider.

Other features of the Adventure R Rally also include a lightweight Akrapovič exhaust, carbon fiber tank protectors, a quick shifter, slimmer wheels, a racing seat, as well as rally pegs. Only 500 units of the 2020 KTM 790 Adventure R Rally will be produced. Pricing has yet to be announced.

ADVENTURE WITH NO LIMIT: INTRODUCING THE KTM 790 ADVENTURE R RALLY

KTM lifts the covers off its most hardcore Adventure bike for 2020 – the limited edition KTM 790 ADVENTURE R RALLY. Restricted to just 500 units worldwide, the third and newest member of the KTM 790 ADVENTURE family is positioned as the most travel capable rally bike.

For those riders who demand the most hardcore performance and the very best suspension equipment available, this is the machine that will easily cross continents in order to ride to the start line of a rally.

Based heavily on the KTM 790 ADVENTURE R, this exclusive model retains the same steel trellis chassis and the potent and compact 95hp LC8c parallel twin engine, with the major component difference being the addition of the special WP XPLOR PRO suspension. Built in the same department as WP’s Factory Racing equipment, it offers similar levels of performance for extreme riding. An additional 30mm of suspension travel front and back helps clear the most awkward obstacles and also creates a seat height of 910mm for this special model.

The WP XPLOR PRO 7548 fork uses cone valve technology; a unique valving system that permits almost limitless damping performance and combines comfort with bottoming resistance. Setting levels that normally can only be achieved by changing the shim stack can now be adjusted from the outside. The cone valve allows unlimited opening, so harshness of the suspension is reduced.

The high quality and fully adjustable WP XPLOR PRO 6746 shock absorber for the KTM 790 ADVENTURE R RALLY has been developed based on KTM’s unrivalled experience from top-level rally competition. Due to modern, low-friction components, the shock absorber shows a significant increase in its damping performance and reduces the physical strain for riders. The shock absorber employs a progressive damping system (PDS) and has completely – and easily - adjustable damping behavior.

To emphasize its READY TO RACE credentials along with the WP XPLOR PRO suspension, the KTM 790 ADVENTURE R RALLY features a weight-saving Akrapovič exhaust, carbon fiber tank protectors and Quickshifter+ as standard. Easily distinguished by its unique color and graphic design with clear screen and winglets, this special edition model comes with narrower rims fitted with tubes for hard offroad conditions, a high, straight racing seat to improve racing ergonomics and Rally footrests for comfort and grip when standing for long days.

Hubert Trunkenpolz (CMO KTM AG): “Quite simply, we’ve built the KTM 790 ADVENTURE R RALLY because we can! At KTM we continually try to push ourselves and the development of our products – this is the READY TO RACE way. We have the equipment at our disposal and we know how to make a truly special bike for our hardcore customers. With its Pro Components range, WP offers suspension close to the same level used by the Dakar-winning Red Bull KTM Factory Racing Rally team on the KTM 450 RALLY. The new KTM 790 ADVENTURE R RALLY is exactly as it says: A rally bike ready for any adventure.”

Further details on pricing, availability and the ordering process for purchasing one of the limited number KTM 790 ADVENTURE R RALLY machines will be announced in the months to come.