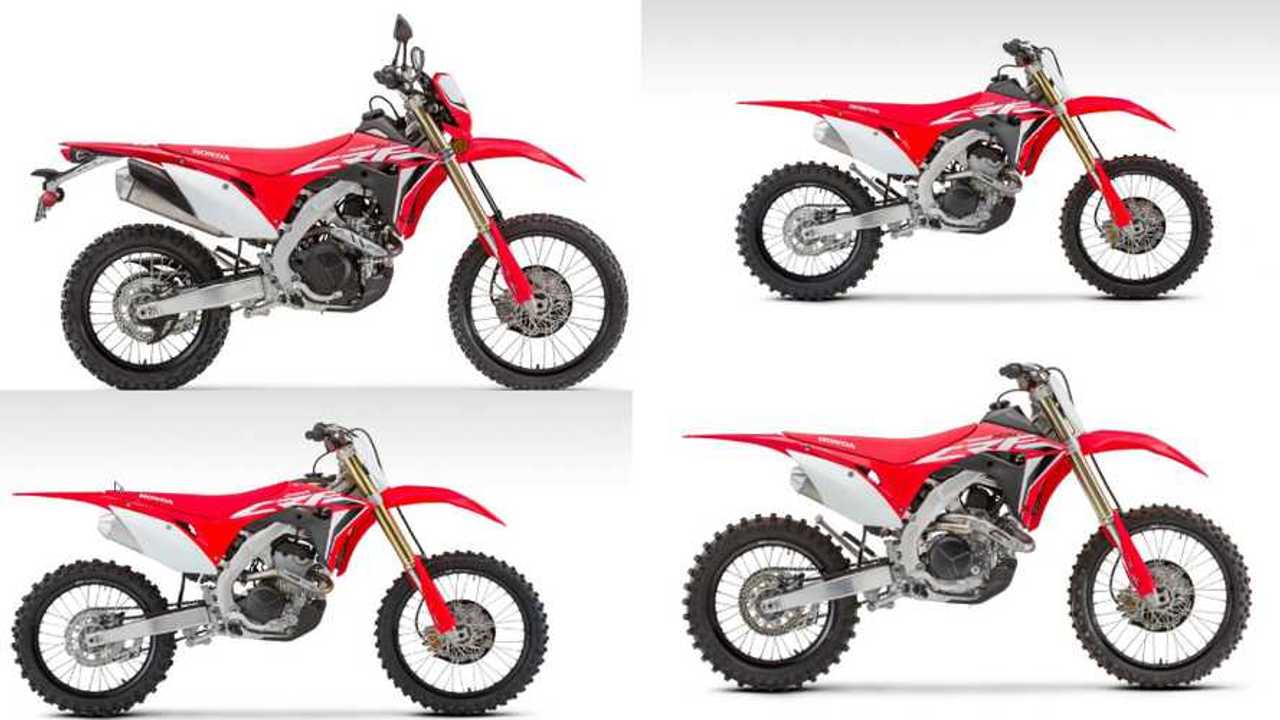 Honda’s knobby-tired CRF 2020 model lineup has been announced, and we’re here for it! If you’re in the market for a motocross bike read on. And even if you’re not, these bikes may tempt you. Do you know how much fun it is to play in the dirt on a motorcycle? You oughta!

The new CRF250R, with a liquid-cooled, single-cylinder 249.4cc engine and a 6.3 liter (1.6 gallon) gas tank, has a 238lb curb weight. For the 2020 model year, improvements include an updated chassis (it now shares a frame and swingarm with the 2019 CRF450R), revised cam profile and exhaust valve timing to give the bike stronger mid-range torque and higher peak power, an improved second gear ratio, and a revalved Showa shock and forks. The bike will be available in August of 2019 and its base price is predicted to be $9,699.

The new CRF250RX shares its older brother’s updates improving chassis, power, and suspension, wholly upping its overall performance for the 2020 model year. The RX model has a larger fuel tank than the R, as well as a larger rear wheel and slightly different engine mapping and suspension setup to stay truer to its “cross country” inspiration.

Updates to the entirety of the CRF450 line, with its 449.7cc liquid-cooled single-cylinder engine include the CRF450R’s new selectable torque control, wherein its fuel delivery and launch control received updates and optimization, its Showa shock and forks got a re-valving, and its rear brake pad material got a revisit and revision. The R’s tank holds 1.7 gallons of gas, its curb weight is 247 lbs and its base price is $10,599. It will be available in July.

Just like the CRF250RX is the cross-country version of its R brother, so too is the CRF450RX the longer-distance capable sibling of the 450R. It shares most of the same specifications and all of the same updates, too. Its shared 449.7cc liquid-cooled single-cylinder engine is fed by a larger 2.25 gallon tank, and thus has a curb weight of 256 lbs. Its base price is $10,699 and it will be available in September.

The street-legal dual-sport CRF450L is based on the CRF450R motocrosser; its 6-speed gearbox, all-LED lighting and a nod to emissions standards makes it a brighter, quieter, more road-worthy version of the CRF. The 2019 model year must have been a solid one, since the bike remains unchanged for 2020 apart from (you knew it had to be in here somewhere) Bold New Graphics! The L has a liquid-cooled 450cc engine, a 2 gallon tank, a curb weight of 288 lbs and a price tag that will run you $11,999.