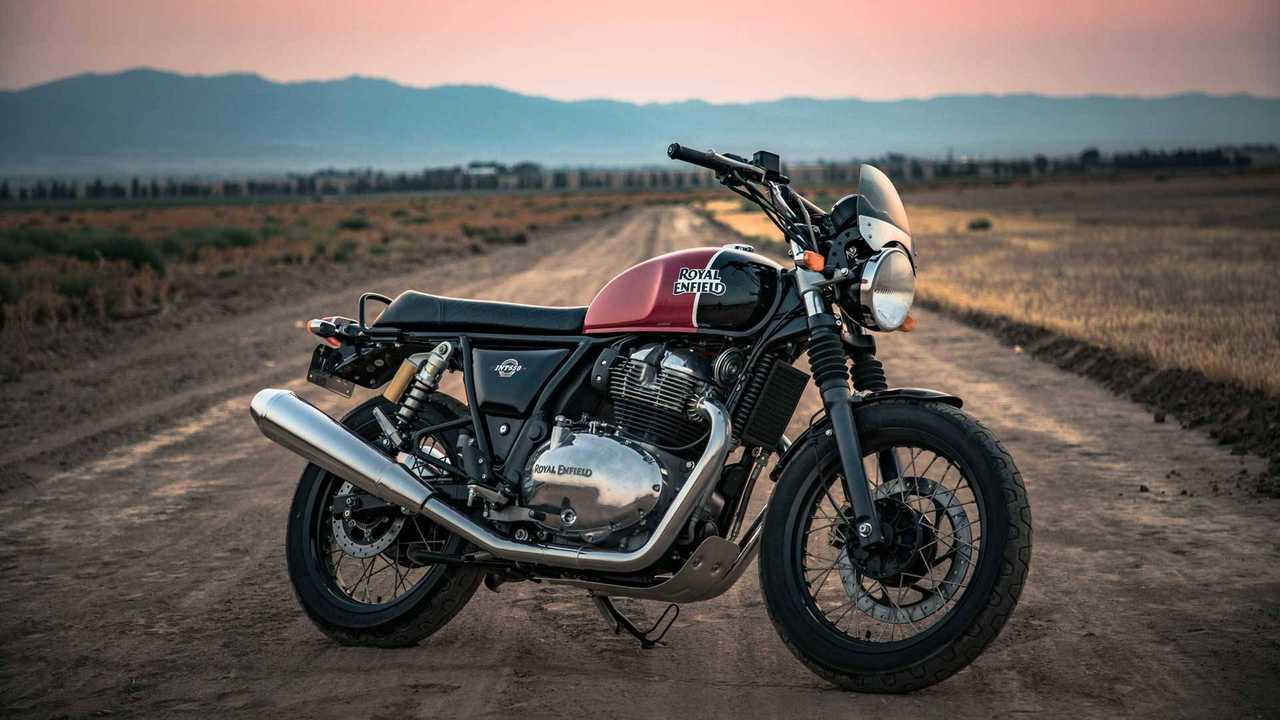 The twin-cylinder INT 650 and Continental GT 650 mark the arrival of the largest displacement Royal Enfields for the North American market. While still built in India, both bikes are being offered in the US first, showing how important this market is for the Royal Enfield.

The other new-new from Royal Enfield

Royal Enfield will be offering three year warranties on the new bikes along with three years of road-side assistance. Details on both are scarce at the moment, but stay tuned, we'll update you as we learn more.

What became two bikes started development as one platform, and share almost all mechanical components. The INT 650 is actually called the Interceptor in other markets, and was presumably renamed to not conflict with other OEM product already baring that model name. Featuring more classic styling reminiscent of bikes of the '60s, the INT 650 features a teardrop tank, raised handlebars, and mid-controls. Twin number two, the Continental GT 650, sports a look that's more cafe racer with clip-ons, a sculpted tank, and rearsets.

Powering the bikes are a fuel-injected, 648cc air-oil cooled, parallel twin rated for 47 horsepower mated to a six-speed transmission. Stopping power comes from single front and rear disks with standard ABS. The Continental GT weighs in at 435 pounds, and the INT 650 444 lbs.

“The twins are fun, affordable, capable motorcycles and will surely create excitement in the underserved middleweight segment in North America, while marking a significant milestone for the company globally,” said Rod Copes, president, Royal Enfield North America. “They are an integral part of Royal Enfield’s continued growth plan in the United States, Canada and Mexico.”

Priced well below any of its competitors in the middleweight segment, Royal Enfield is poised to make waves with the arrival of the INT 650 and Continental GT 650 next year. What are your thoughts? Let us know in the comments below.

Royal Enfield, the leader in the global middleweight motorcycle segment, has officially announced the North America timing and pricing for the highly anticipated twin motorcycles – the INT 650 and the Continental GT 650. The new models will be available at North American dealers in spring 2019 and will start at MSRP $5799, which will include ABS and a 3-year warranty and roadside assistance.

“The twins are fun, affordable, capable motorcycles and will surely create excitement in the underserved middleweight segment in North America, while marking a significant milestone for the company globally,” said Rod Copes, president, Royal Enfield North America. “They are an integral part of Royal Enfield’s continued growth plan in the United States, Canada and Mexico.”

The first twin-cylinder motorcycles to be produced by Royal Enfield since 1970 – the motorcycles are the first created for the global market leveraging Royal Enfield’s world-class product development and manufacturing capabilities – are built for real-world riding with sufficient power to navigate city traffic or cruise effortlessly on the open road. The offerings will inspire confidence in new riders and satisfy the performance expectations of experienced riders.

The twins combine carefully considered engineering with classic looks and are inspired by the past and designed to remain relevant. Air-cooled to simplify maintenance and ensure lines that are faithful to Royal Enfield’s rich design heritage, the Continental GT 650 and INT 650 are built for real-world riding and feature an exceptionally agile chassis, developed at Royal Enfield’s UK Technology Centre, in conjunction with legendary sports bike frame builder Harris Performance.

INT 650
The INT 650 is reminiscent of the street-scrambler-style motorcycle that emerged in California in the ’60s with a teardrop tank, dual seat and high, braced handlebars for a comfortable and commanding riding position.

Genuine Motorcycle Accessories
Both the Continental GT 650 and the INT 650 will be available in a variety of paint and graphic options. Riders can further customize their motorcycles through a broad collection of genuine motorcycle accessories.