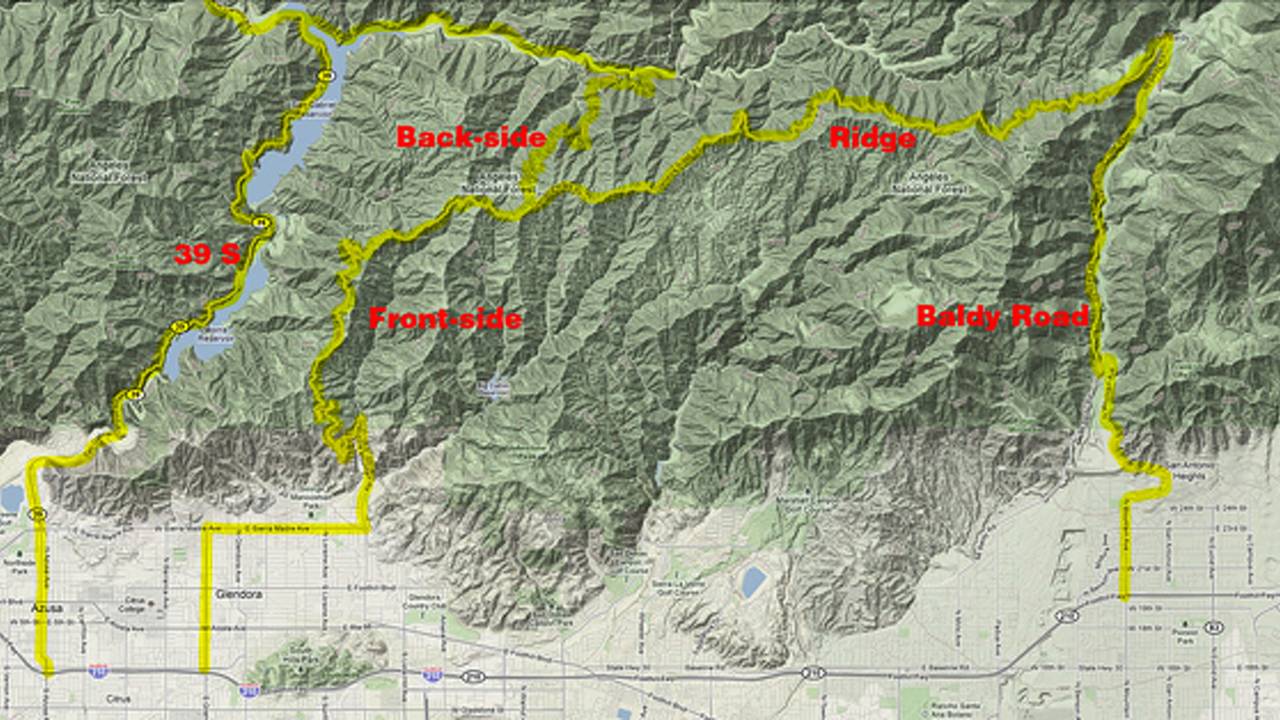 Southern California is a motorcycle paradise, but as a result, many of the best roads get clogged up with Harleys and cops. Sometimes even cops on Harleys. You think you’re doing well, then a squid on an R6 lowsides into your lane, spreading blood and oil across the pavement. But get away from The Snake and Angeles Crest and there’s still some amazing riding to be had, free from all the hassle...

Southern California is a motorcycle paradise, but as a result, many of the best roads get clogged up with Harleys and cops. Sometimes even cops on Harleys. You think you’re doing well, then a squid on an R6 lowsides into your lane, spreading blood and oil across the pavement. But get away from The Snake and Angeles Crest and there’s still some amazing riding to be had, free from all the hassle. Hop on the 210, get off at 39 and there’s a sign proudly proclaiming, “Welcome to Azusa, The Canyon City!”

Besides being home to Shinya Kimura and Chabbot Engineering, they also have Highway 39, Glendora Mountain Road and Glendora Ridge Road. I've been going up to GMR since I was 16 when I got my first sportscar. Back then, you could head up to the parking lot around midnight on a Wednesday night and there would be anywhere from 5 to 40 cars, most of them rolling on sticky tires and coil-over suspension.

Since I've been into motorcycles, the front-side of the road has re-opened and just a few weeks ago, 39 opened back up to Crystal Lake. The remaining 4.5 miles between crystal lake and Angeles Crest Highway has been closed since 1978. There are plans to have it re-open in 2015, but this is CalTrans we're talking about, so I'm not getting my hopes up.

There are five roads up there, four of which are really good. San Gabriel East Fork has some pretty sketchy pavement and there's often people around so it's not real great idea to haul-ass on that one. The other four are amazing though.

What you're looking at here is 39 and the front-side of GMR. 39 can be a lot of fun if you're into high speeds. If you don't feel like taking risks, just cruise and use it as a highway to get to the good parts. My usual route is up 39 to Crystal Lake, back down to the bridge, take things easy down East Fork and then ride the back side of GMR. I stop at the top and take a break for a bit at that point. Afterward, it's up the ridge road, back down the ridge road finish off by going down the front-side of GMR.

This is where 39 starts to get good. Pass the bridge, go slow past the ranger station and then enjoy the esses. There's great pavement and better corners. If you're looking for a place to drag a knee on a heavy touring bike, this is it. Also on this map is part of East Fork. There's a parking lot across the bridge and it's a great place to meet if you don't wanna have a big group of riders all hanging out at the gas station down by the freeway. Pay attention to the big sweeping U-turn — the pavement is crumbling and there's usually dirt.

Ever wanted to ride a really cool dead end road where you're unlikely to run into the highway patrol? Here you go. This is the northern section of 39. It starts out very fast then slows way down. The pavement changes too. Luckily, the good stuff is in the fast sections. In red you can see part of the closed section that leads to Angeles Crest Highway. Imagine how awesome it would be if there was a short-cut to the really amazing part of ACH. It's real, but it's been closed since '78. When you get to the Crystal Lake turn-off, make sure to slow down and make the right turn. There's only a few corners past it and they're not that great unless you need a place to take a photo of a Moto Guzzi. Instead, stop by the snack bar. There's a cat that'll do anything for a bite of your tuna sandwich.

After you've come back down from 39, hang a left at the bridge, putt down East Fork and be careful not to go down Shoemaker road. It's a dead end. Take it super slow through the river village (there are signs) and don't miss the U-turn to get onto GMR. Once you’re headed up the hill, be careful not to go railing into corners you've never seen before. There are usually a few surprises like new oil stains or sand in one or two corners. After a few runs, you'll be hooked on GMR for life. It's that good. Go slow pulling into the parking lot at the end; I've actually seen people come flying in there way too fast, freak out and crash either into the dirt or head-on into another rider. Don't be that guy.

The Ridge road gets its name because it's a road on a ridge. Fancy huh? If you crash here, it's a long fall to the bottom, but the views are spectacular. Watch for ice here if it's under 90º out. Also watch for black and white Crown Victorias trying to hide in the turn-outs. If you're up here on a weekend, odds are so are they.

Once you get to the end of the ridge road, you can either head down to the 210 or turn around to ride the front-side of GMR. There's a cafe on Baldy road, but it's usually full of Harleys and the food isn't half as good as what you can buy at the snack bar. The front-side of GMR is an amazing road. It's starts out pretty quick and flows really well. The pavement is good through 90% of it too. That said, there are a few corners that can catch you out if you're overly eager. Study the map and memorize where those scary hard corners are hiding. After you've reached the bottom, hang a right at Sierra Madre and a left at Grand. It'll drop you back by the 210.

Take a look at the gallery to see the maps in full-size, when you look at them small, esses tend to get straightened out and down-hill decreasing radius U-turns look just like everything else. Use your own judgment when it comes to speed. If you take my warnings seriously, you should have a relatively safe (as safe as dragging your knees on a motorcycle can be) and ticket-free ride through some of the best roads Southern California has to offer.

The information contained on this website is for entertainment purposes and not meant to constitute expert advice. You are not the next Rossi, Biaggi, etc and no amount of information read on the Internet will magically make you a rider of MotoGP-caliber skill or god-like proportions. Articles on this site are merely meant to make you think, entertain and, wherever possible, you should actively seek out the opinion and advice of real experts. We always encourage you to act in a safe manner while operating your motorcycle and as such take no responsibility for the consequences of any jackassery you may attempt as a result of something you may have read here.