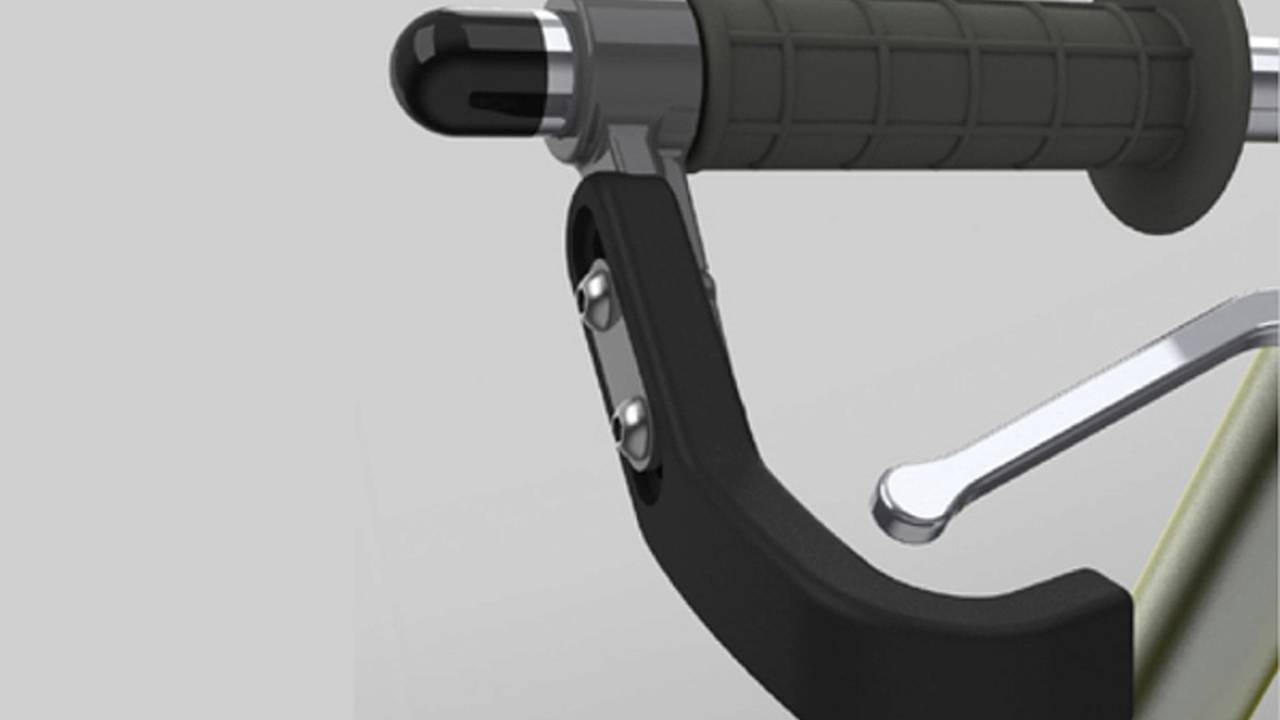 Remember this year's Daytona 200? Or the famous Biaggi/Rossi elbow match from Suzuka in 2001? At the time, there was a lot of drama about how Biaggi did it to force Rossi wide, but Daytona is a good example of why a rider might think it's necessary to stick an elbow out. Why am I pointing out these two racing incidents? Well, somewhere along the evolution of the motorcycle, dirtbikes sprouted hand...

Remember this year's Daytona 200? Or the famous Biaggi/Rossi elbow match from Suzuka in 2001? At the time, there was a lot of drama about how Biaggi did it to force Rossi wide, but Daytona is a good example of why a rider might think it's necessary to stick an elbow out. Why am I pointing out these two racing incidents? Well, somewhere along the evolution of the motorcycle, dirtbikes sprouted hand guards to both protect the rider from rocks, bushes, other riders and also to protect the controls from hard pointy things, to improve crashability and to keep the brake and clutch from being inadvertently pulled by the dirt when you drag a bar. Essentially a piece of bent aluminum with plastic on top, hand guards are not high-tech. Why not put them on all motorcycles then? Woodcraft seems to think we should.

Obviously, some of those problems are specific to motocross racing. Most racing organization rule books say that if a bar touches the ground, that constitutes a crash. Still, what if you never had to worry about getting too close and tagging someone's brake lever, dropping the bike and breaking your clutch or expensive Brembo RCS19 master cylinder or even snapping a stock lever. Due to be released in August, Woodcraft's Hand Guards will greatly improve the crashability of whatever you bolt them to and will also help prevent crashes both on and off the track.

One of the greatest fears of hardcore lane splitters is crashing because you catch your brake lever on a mirror. Even if you manage to stay upright, you're going for one hell of a ride that's likely to include literally bouncing off of cars. No fun. On the track, all it takes is a misplaced elbow and your day can come to a screeching, smoking, painful halt.

So why does someone need to go out and engineer a whole new product when there are already a plethora of hand guards available for the dirt market? The dirt stuff tends to be heavy, bulky and focus on coverage first on things coming directly at you with side-on coverage coming in second. If you're catching large rocks and tree branches in the hands on your street bike, odds are you have bigger problems to deal with. Mounting and physical dimensions also need to be taken into account. Try to bolt a set of aluminum off-road hand guards to your sportsbike and you'll quickly realize that they won't fit into the fairing and, even if they did, you'll lack the bar space and shape to make them work. Woodcraft's idea is to put a super strong aluminum mount on the end of the clip-on and bolt a large, extremely strong plastic slider to that. The slider curves up and forward to offer protection from the side and protection for the part of the brake lever that's likely to be hit. Smart.

There are a few downsides though: You'll need long, aftermarket bars that cost money. Your friends will probably make fun of you too for putting those funny guards on your bike in the same way the first guy to wear a neck brace or a back protector was probably called a nerd. The guards themselves are $180. Replacement sliders are another $80. Still, for a product that's extremely well-designed and produced in America with the highest quality materials, the price isn't bad. The $80 replacement cost for new sliders is even reasonable when you take into consideration the cost of what they're protecting. In 10 years, we'll probably see guards like this being incorporated into motorcycle design from the factory in the same way Aprilia is incorporating frame sliders into its RSV4.