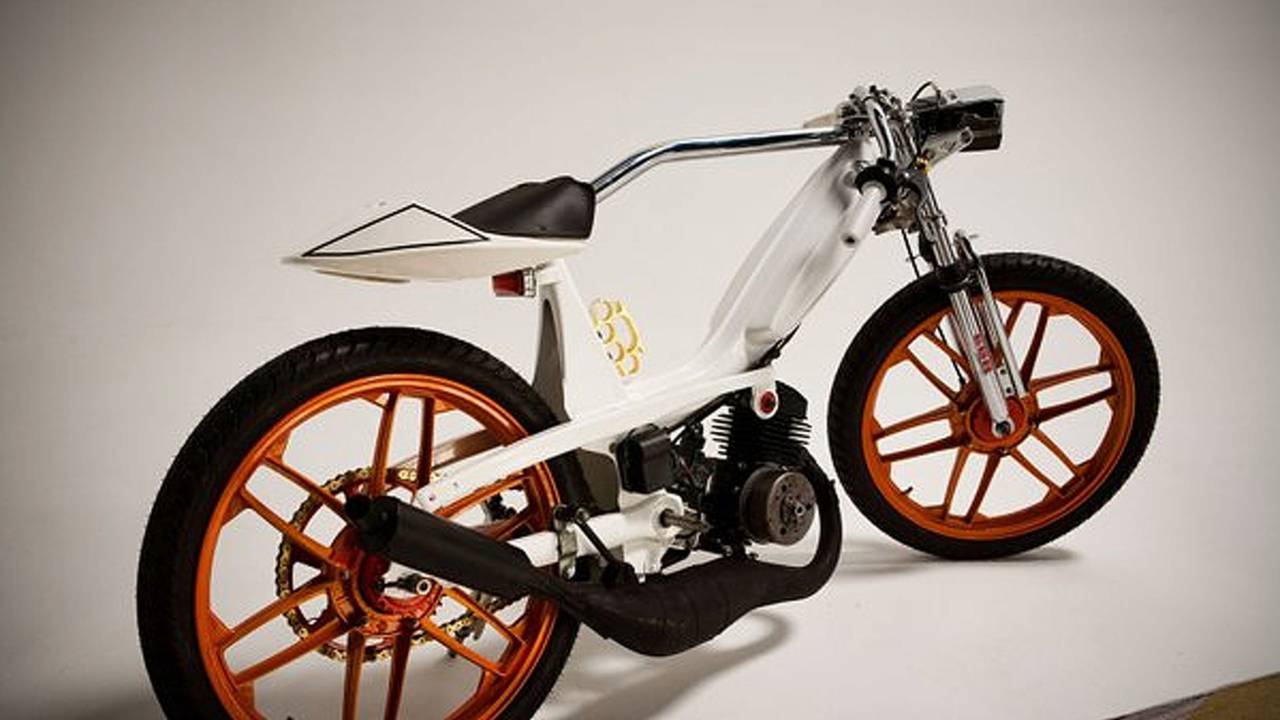 “The brass knuckles act as handles to move the bike.” Jarrett Petty of Austin, Texas, built this custom Motobecane to be simple, but elegant. It was the kind of thing he always wanted to build when he was a mechanic at Austin Mopeds, but couldn’t since he was working on other people’s bikes. Now, the hard-tail can reach over 60mph. Photos: Mike Torres “The seat is plastic and I didn'...

“The brass knuckles act as handles to move the bike.” Jarrett Petty of Austin, Texas, built this custom Motobecane to be simple, but elegant. It was the kind of thing he always wanted to build when he was a mechanic at Austin Mopeds, but couldn’t since he was working on other people’s bikes. Now, the hard-tail can reach over 60mph.

“The seat is plastic and I didn't want to put constant pressure on the cross bar because I've seen them wear out at the base when used to pick the bike up,” Jarrett told us. “I originally got the inspiration when I saw a pair of brass knuckles being used as a choke lever on a fantastic build by Moto-Matic Mopeds.”

“The frame is a 1978 Motobecane 40T which was stripped down, sand blasted and powder coated. The idea for the colors came from my friend Mike Torres. It originally had spoked wheels, but they were replaced with  6 star mags which were also powder coated. The frame was stripped of all unnecessary tabs or pieces and the center kickstand and mount was removed to fit in a better/stiffer Doppler motor return spring.”

“Bikemaster motorcycle levers and throttle were chosen for the controls, with white Magura grips, maybe not the best choice for dirty mechanic hands. The forks are made by EBR, and were originally made to fit a Puch moped; therefore the neck tube had to be cut about 40mm to match. The cross bar is also made by EBR. The seat is from a Polini racing pocket bike and sits on a plate I welded to the original seat post.”

“The original AV7 crank cases were discarded and replaced with a set of AV10's which feature case induction and a third top transfer. I opened the intake a little more and then matched the transfers to a 50cc Doppler cylinder, which I had already ported to raise the exhaust and enlarge the transfers somewhat. A machined Doppler endurance crank was chosen since the bike hits very high RPMs and cheaper cranks tend to shear under the same conditions. The points controlled stator was removed and a Malossi CDI was used in its place. It's being fueled by a 19mm Dellorto carburetor which sits on top of a 4-petal, dual-stage carbon reed block.”

“The original variator/clutch has been replaced by a clutchless Doppler ER3 variator, and a Doppler clutch pulley. This setup allows the clutch to engage in between 5-7k RPMs which rockets the bike from a stand still straight into its powerband. A Ninja G3 exhaust was chosen primarily out of curiosity about how it would perform. I was already aware how it did with a matching Doppler exhaust. The gold 420 motorcycle racing chain was chosen to match the brass knuckles.”

“I used to work on and build old mopeds for Austin Mopeds, but was rarely given an opportunity to go above and beyond basic performance or frame design due, mainly, to customers' lack of interest or funds.  The few that I was given free reign on turned out beautifully and I was always very proud of them.  So when I finally had an opportunity to do the same for myself, I set out to build a bike that would turn heads while still capable of screaming like a proper two stroke should.”

“The bike rides differently than any I've ridden. It's a rigid frame, so it has no rear suspension. This, coupled with a variated motor, leads to a lot of vibrations. So much so that the intake actually rattled off in the first 20 yards I rode it! It certainly isn't slow though. Originally the bike went 25-30mph and was in no hurry to get there.  Now the clutch engages at 6k RPMs and shoots it immediately into the power band range which simply rockets it to about 50. It then cruises the rest of the way to its top speed of just over 60mph. It has such a strong power band that it will out-accelerate my ‘74 CB360 for a short distance.”

“Sadly, the bike isn't mine any more. I had first started building it about 3 years ago but quickly ran out of money. A friend of my brother's saw the rolling chassis and said he wanted it. Although I wish I could say it was still mine, I know it's in the good hands of someone who truly appreciates it.”

“Why not just build a motorcycle? I get that question all of the time and the truth of the matter is that I simply love these mopeds. I build and ride motorcycles as well, but there is something about tuning a small two-stroke motor to do twice its intended speed for a quarter of the cost of modifying a motorcycle or car that just does it for me. It's hard to explain to anyone who hasn't experienced the same, but going 70mph on a tiny 30-year-old pedal-assisted motorbike that you designed, built, painted and tuned by hand yourself is comparable to going 150 on a new Yamaha motorcycle.”

There's 16 high-res photos in this gallery.