Can-Am Spyder Hybrid: boldly going where Piaggio has gone before 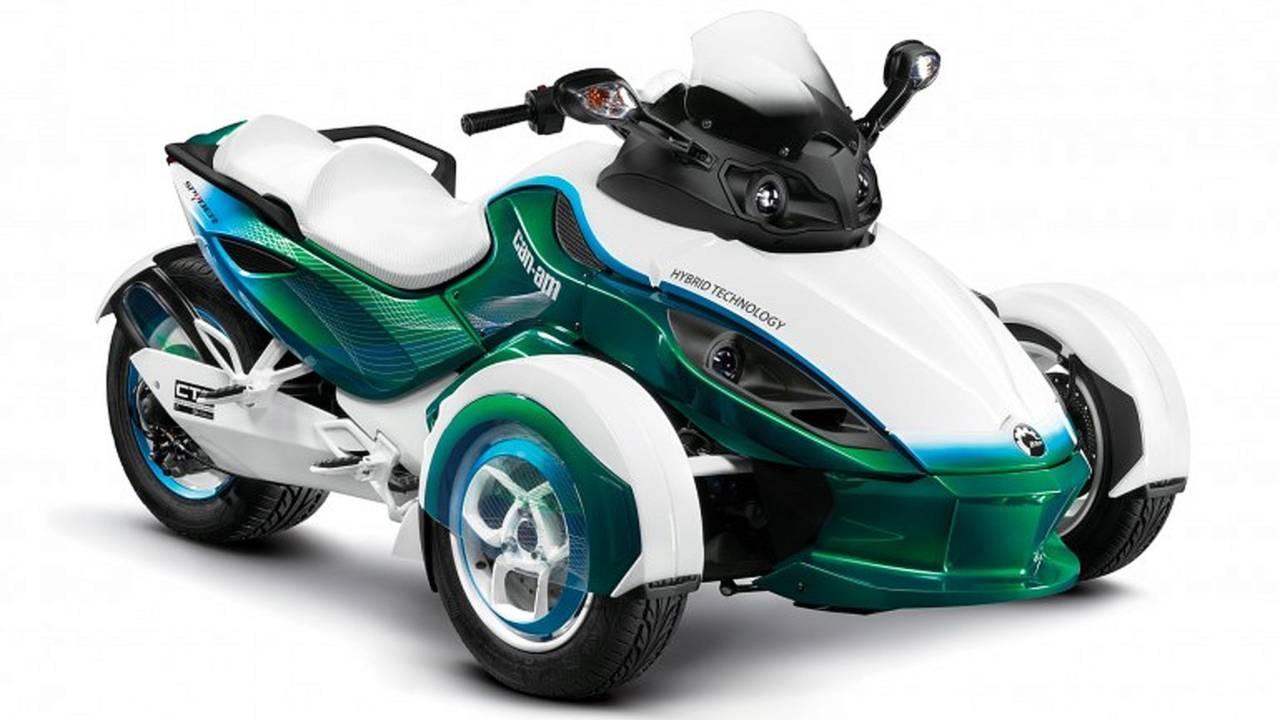 Exciting news out of Canada today. BRP has announced that it’s partnering with Universite de Sherbrooke to develop a plug-in hybrid version of the Can-Am Spyder. You know, the vehicle that successfully combines the performance of a car with the weather protection of a motorcycle. The four-year project aims to tackle the challenge of fitting hybrid drivetrain components into a “compact” three...

Exciting news out of Canada today. BRP has announced that it’s partnering with Universite de Sherbrooke to develop a plug-in hybrid version of the Can-Am Spyder. You know, the vehicle that successfully combines the performance of a car with the weather protection of a motorcycle. The four-year project aims to tackle the challenge of fitting hybrid drivetrain components into a “compact” three-wheeled platform. The thing is, Piaggio has done all this already, manufacturing a mass-production, reverse-trike that, right now in 2011, doubles BRP’s target fuel economy. Of course, the Piaggio can lean around corners too.

Announcing the start of hybrid development, BRP stated, “The project’s research team is led by Professor Alain Desrochers from the Université de Sherbrooke’s Mechanical Engineering Department and includes about 30 people from the University and BRP. The team will need to be original during the development of the components. The roadster’s compact size alone poses major challenges. Rather than modifying existing hybrid technology, the researchers will have to design an entirely new propulsion system.”

“Creating a three-wheel vehicle as opposed to a hybrid car poses significant design challenges that require a very high degree of innovation,” explained Desrochers. “These challenges include the lack of space to accommodate hybrid motorization, cooling problems, aerodynamics, vehicle weight, and noise. Everything must be studied and modified.”

According to Gizmag, BRP’s targets are: reduce fuel consumption by 50%; reduce CO2 emissions by 50%; 20-mile all-electric range; 375-mile total range; all that without impacting performance.

The current Can-Am Spyder averages around 30-35mpg and has a 6.6-gallon fuel tank. Extrapolating the target range of 375 miles (presumably with the aid of its plug and a full charge) and assuming the same-sized fuel tank, we can see that BRP hopes the hybrid will achieve around 57mpg (US).

The Piaggio MP3 Hybrid 300ie? 117.6mpg (US) and 12 miles on electricity only. It manages that in a compact, scooter-sized package that weighs 566lbs (dry). Even before hybridization, the car-sized Can-Am Spyder RS weighs 699lbs (dry). Batteries will presumably add a significant amount of weight.

So, the “design challenge” of integrating hyrbid components into a compact three-wheeler? It’s already been achieved, with a production product that massively exceeds even BRP’s initial goals.

Of course, the Can-Am Spyder has one thing the little Piaggio doesn’t: a 999cc Rotax v-twin. It’s the same one that powered the Aprilia RSV 1000 R, just here down-tuned to 160bhp and 77lb/ft. That’s enough to give the Can-Am a restricted top speed of 110mph and a 0-60mph time in the mid 4-second range.

The Piaggio? it combines a 4bhp electric motor with a 25bhp, 278cc single-cylinder for a grand total of 29bhp and 31lb/ft of torque. It tops out around 65mph.

The Piaggio has one other trump card to play. Even though it's very expensive for a scooter, it will retail for just $8,499 when it goes on sale in the US late this year. The Spyder range, even without hybridization starts at $16,500 and goes all the way up to over $28,000.

Is it just us or did the Can-Am Spyder just get even more irrelevant?

BRP via Gizmag and Jalopnik