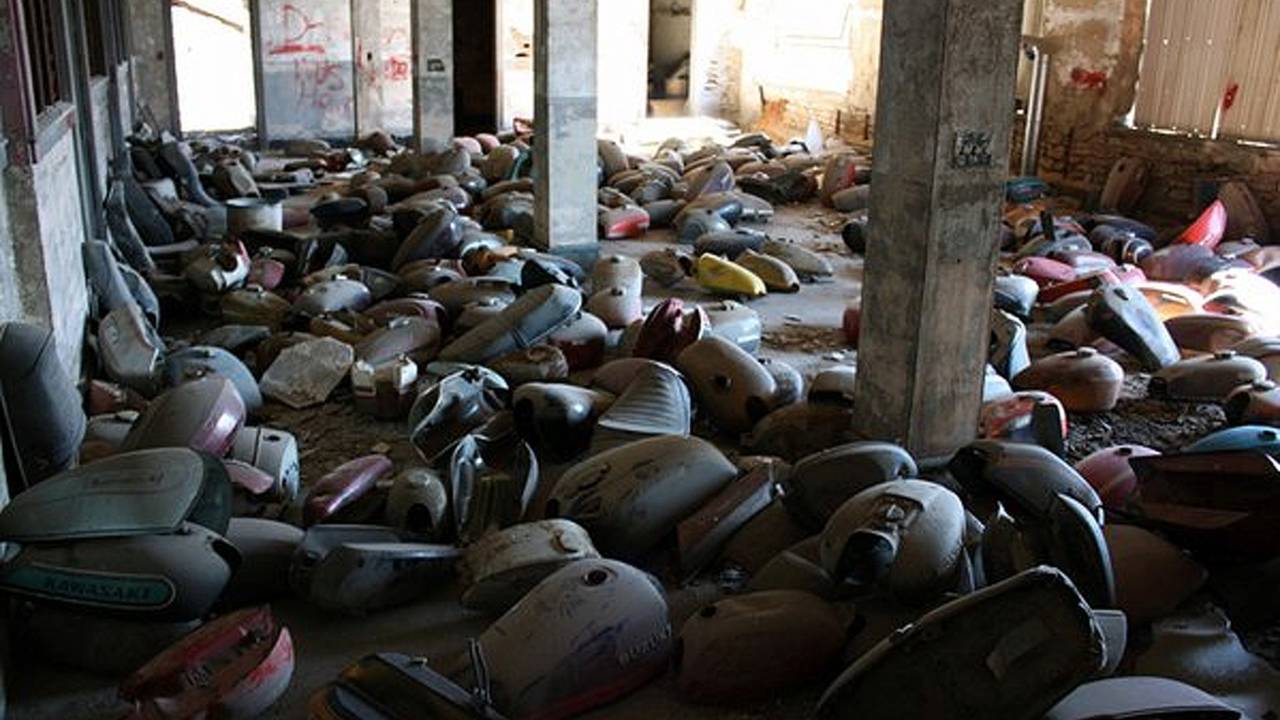 Remember New York’s motorcycle graveyard? Hundreds and hundreds of bikes from the ‘60s, ‘70s and early ‘80s were left to rot in a decaying building upstate. Rumors had circulated for years then, last June, we published photos taken by urban explorers. Now it’s gone forever. After reading about the graveyard on Hell For Leather, Dave from DC Classic Cycles and his friends set out to fin...

Remember New York’s motorcycle graveyard? Hundreds and hundreds of bikes from the ‘60s, ‘70s and early ‘80s were left to rot in a decaying building upstate. Rumors had circulated for years then, last June, we published photos taken by urban explorers. Now it’s gone forever.

After reading about the graveyard on Hell For Leather, Dave from DC Classic Cycles and his friends set out to find and explore it. After the initial visit in September, they were able to contact the owner, and eventually harangued permission to access the building. Sometime last summer the building in Lockport, NY was condemned by the town then, in October the owner was given a short period to clean out the bikes and remove anything that still had any value. Dave was invited up to pick through the remnants.

The motorcycles were collected by a guy named Kohl. He owned several different motorcycle shops over 50 years and by all accounts a motorcycle enthusiast. Kohl would take trade-ins of motorcycles and would also buy inventory of defunct dealerships. In the 1960’s cheap Japanese motorcycles became incredibly popular and dealerships sprouted up everywhere. It was easy back then to start a dealer compared to today. Dealers were small and plentiful. I am not sure when Kohl purchased the building but I would guess it was in the early 1970’s. In 1997 I believe Kohl sold the building and motorcycles to Frank. Frank operated the business as Kohl’s Cycle Salvage which sold parts off of the hundreds of motorcycles he had. Back taxes were owed on the building and Frank began paying them. In 2002 Kohl died at 80 years of age. The building began to fall apart and crumble around itself. At one time Frank got an estimate to have the roof replaced. The estimate was $300,000, far more than Frank could justify. With the dilapidating conditions the City of Lockport condemned the building baring anyone from entering. The building and motorcycles sat for months. Frank didn’t even go in the building for 16 months prior to September 2010. Kids broke the lock on the back door of the place and began breaking stuff, moving stuff around and spray painting areas in the building.

We spent the next 6 hours in the building exploring every square inch of the four levels. The first time Salva and I were in the building we didn’t know there was a stair case in the North West corner of the building. The stairs are in the back of the office area and lead to the huge third floor and a small forth floor. The third floor is the size of the main building. Once you go up the stairs you come to a large room that is full of mostly new old stock mufflers. Mufflers and pipes are everywhere and most are in great condition. Following the narrow path through the mufflers and pipes leads you to a door way and through that door way is a massive open area with motorcycles and parts everywhere. The floor had massive holes in it where the flooring caved in and crashed to the level below.

The building’s content is massively overwhelming. It’s just a lot to take in; especially when you are trying to pick what treasures you want to take home. We claimed bikes and parts and gathered them up and talked to Frank about prices. The prices were very good which made us happy and allowed us to get more stuff. We loaded our scores up, thanked Frank and hit the road.

I’m afraid there will never be another scrap yard like this one. These days it’s much different. Motorcycles are much more expensive and not just tossed aside. With things like ebay and craigslist there are just too many avenues to sell bikes and parts. I’m glad we had the opportunity to meet Frank and have full access to the building. These finds are what we dream of as kids. We all hear the rumors but assume they don’t exist or don’t make the effort to explore the possibility or to track down the facts. This is one time where the outcome made it all worth it.