Two weekends ago, San Francisco-based startup Mission Motors made history when rider Steve Rapp lapped Laguna Seca in 1:31.3. That’s a new record for electric vehicles of any kind and would have put them 5th on that weekend’s AMA Supersport grid. Steve went on to win the race, utterly blowing away competition from MotoCzysz, Lightning and Brammo. Two days ago, we talked to Steve and our old bu...

Two weekends ago, San Francisco-based startup Mission Motors made history when rider Steve Rapp lapped Laguna Seca in 1:31.3. That’s a new record for electric vehicles of any kind and would have put them 5th on that weekend’s AMA Supersport grid. Steve went on to win the race, utterly blowing away competition from MotoCzysz, Lightning and Brammo. Two days ago, we talked to Steve and our old buddy, Mission marketing guru David Salguero, about that achievement. On finishing 40 seconds ahead of MotoCzysz in an eight lap race. David: “The Mission R is a bike that was conceived at a system level to perform well at the track. You basically start from a clean sheet and say ‘what is gonna make this bike the fastest?’ Distinct from every other bike on the grid, we do not use any off-the-shelf powertrain components.” “We're using our own stuff and our own stuff is about as power and energy dense as it comes. We have 14KwH of battery on that bike, which is 2 less than what's in a Chevy Volt. It's a LOT of battery.” “So James Parker’s Chassis allows for 14kWh of our technology, but it also gives us that 55º of lean angle that Steve uses every degree of. Really you just have to start from the top and use the lightest and most powerful tech or the smallest and more powerful tech.” “You need a rider that's really consistent to be able to dial in that powertrain. Steve has ridden everything under the sun and knows how to dial something in and how to be consistent.” A slow start. Steve: “The first time I rode the Mission R was at Thunderhill maybe a few months ago and, to be honest with you, I wasn't impressed at all.” “They had it setup really mild and they didn't tell me a lot of stuff at the beginning, cause I don't need to know everything, they just wanted to make sure everything was working.” “They said ‘don't worry, we have it in a safe mode right now. There's a lot more power we can pull out of it.’" “So then we rode it at Buttonwillow and it was a lot better than the first time. A lot better. It worked great and they kept adding power to it and all the stuff they needed to do and then we went to an electric vehicle race at Laguna, Refuel, and it really started to come alive there. It was really starting to run fast, and the power was better and we were getting the suspension to work better.” Electric tuning. David: “That's kind of how we develop our electric powertrains. That bike does have our very latest technology in it. When you're bringing it up, you set a threshold and once everything is running ok, you bring it up a notch and repeat. That's how we were able to drop a full ten seconds between Refuel and the TTXGP. Every time we hit another threshold reliably, we'd say we can turn up the wick a little bit. We've got this stuff called cell-to-server software that looks at all the parameters in real time; the temperature of each battery cell and all that kind of stuff. It's that kinda game.” Steve: “It's unheard of. It's never happened to me and I've never heard of it happening in motorcycle racing, that you can drop ten or eight seconds.” “In racing, in the past, it's like you're looking for tenths and maybe one second at the most, not ten seconds. It’s cool that you can make that much progress.” 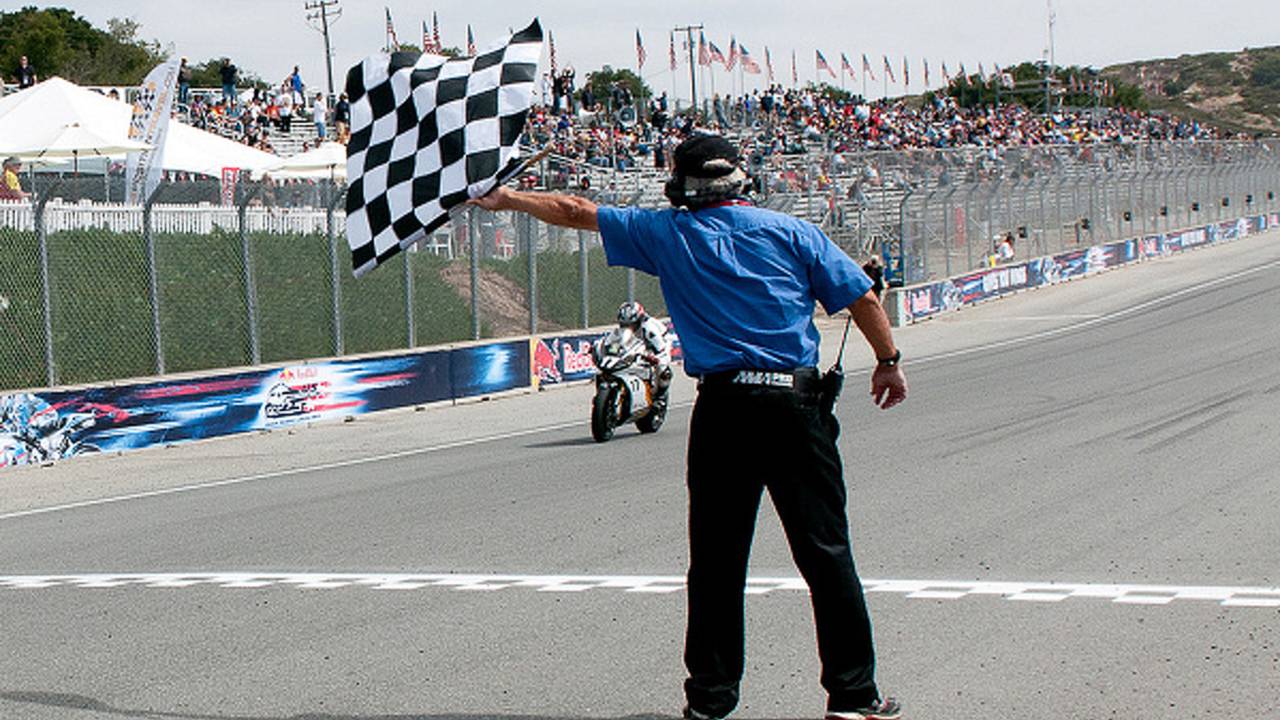 Photos: Scott Jones/Mission David: “Brammo rider Steve Atlas asked us, ‘where the hell did you guys find that many seconds? Where did that come from?’ And we just kinda pointed to our guy that had a laptop connected to the bike and went, ‘Yep, it's right there.’" Steve: “I was working on the spring rates and different tire compounds, different brake pads, etc. And, by the end of that electric vehicle challenge at Laguna, I was really feeling good and enjoying riding the bike. Then we rode it one more time at Buttonwillow and they got it going even faster. Then I was really starting to be impressed by it to the point where I wanted to ride it more and more." “There's nothing coming up right now and I'm bummed because I wanna ride the bike because it's such a fun bike to ride. I like using analogies to compare things, but I can't because there's just nothing really like it out there.” “It's not the novelty or the newness of it, it's just how easy it is to ride and the way the power comes on. There's no shifting with your feet or hands and you have a lot of time just to worry about riding the bike. You're not worrying about the gearing and all the other things that go with gas bikes.” Lapping on par with 600s. David: “I think this was really the year where general motorcycle and vehicle enthusiasts started to take notice. We had our other bike on display all weekend out in front of the Pro Italia booth and people just kept coming up, asking educated questions about kWh, regenerative braking, all those things. People are starting to understand what these things are and it's no longer people saying things like ‘oh, do you put cards in the spokes?’ and stuff like that. People are genuinely interested and they look at the bike and they're impressed.” A little on regen. David: “We put about one percent of the total energy used back into the pack through the use of regen. That number is particuarly low due to rider preference – Steve asked to have it turned down low. But it's representative of the fact that, in a race bike application, regen is more for feel and balance than for putting energy back in. It’s really a sort of traditional engine braking kind of feel and that's a tunable parameter.” Riding an electric through The Corkscrew. Steve: “Actually, it’s easier to accelerate because you don't have to shift gears now. There's nothing hard or awkward. If anything, it's actually easier to ride because of that. It's just one gear, smooth power, there's no hits in the powerband like you have with a gas engine, it's easy to maintain partial throttle, everything. It's just so fun to ride.” “There's only one difference. And the shifting is no big deal, that's easy. Anybody can ride a bike and not shift. That wasn't hard to get used to. Riding the bike, the way it feels, the way it turns, the way it leans, none of that feels out of the ordinary. The only thing that I've noticed that would catch anyone off guard is the weight of it . So when you come in to a corner, you definitely notice that you're braking quite a bit earlier that you normally would.” “Anybody could jump on the bike and ride it easily, safely and that would be the only thing would really notice. When they came back I bet they'd say, ‘oh, it feels a little heavy when you try to stop it.’ That's it.” Electric speed. David: “The bike is, theoretically, according to all our logging and logarithms and stuff, capable of over 160mph. Again, the electric motorcycle race is basically one big multi-variable mathematical equation where you take into account speed versus corner speed versus range versus all this other kind of stuff, so to say get to a lower top-speed more quickly, is a more efficient way to get good lap times than to go extremely fast and get hard on the brakes. I think the 133 was a safe lower limit of what the bike can do.”

The Mission team, that's David on Steve's right. When you’ll be able to buy one. David: “There’s no plans right now for a road bike. Mission is all about technology. We got a bunch of people that are doing things here with electric powertrains and batteries and electric motors and software running the stuff that hasn't been done before. That's what we do best. We don't do distribution, we don't do volume vehicle manufacturing here. It's just not what we do. We're not gonna focus on that, we're just gonna focus on what we do best.” “We're really, as a company, focused on the OEM car stuff. We're getting so much traction there and it's really actually kind of exciting for us and for a lot of people at this company, which is growing a ton. There's 35 of us now. People are passionate about making an impact on the world here and getting thousands, or tens of thousands or even more powertrains out there is one way to have a real massive impact for a company of this size, so that's really what we're focused on right now.” What’s next. David: “Setting AMA 600 lap times was the thing to and we're just trying to think of what's next and we think the Mission R is the bike to do it and Steve Rapp is the guy to ride it. We're gonna keep thinking creatively about that.” Steve: “What I've proposed actually to Edward, who's the founder and owner of Mission Motors is, ‘We can go race all these other electric bikes, but at this point it's not really gonna be much of a race.’ I think the next frontier for us is going to a race and racing some gas bikes. I honestly think we can beat them. That's what I'd like to see.” “Even at Laguna, before we went out on track, they were joking around over the loudspeaker and then it seems like now, I honestly think that this bike and this company have changed the way everybody thinks. They can't say anything about a bike that can beat theirs. I honestly think this was an historical event for electrical vehicles in a lot of ways and I think it's just gonna keep progressing.” “I could see these bikes in the next five to ten years, maybe less, going faster than some of the fastest gas bikes. Last year the lap record was a 43 and this year we did a 31, so it was 12 seconds in one year. Can you imagine if we did that again? We'd be going faster than the MotoGP bikes.”
By: HFL Staff
++
++
Got a tip for us? Email: tips@rideapart.com