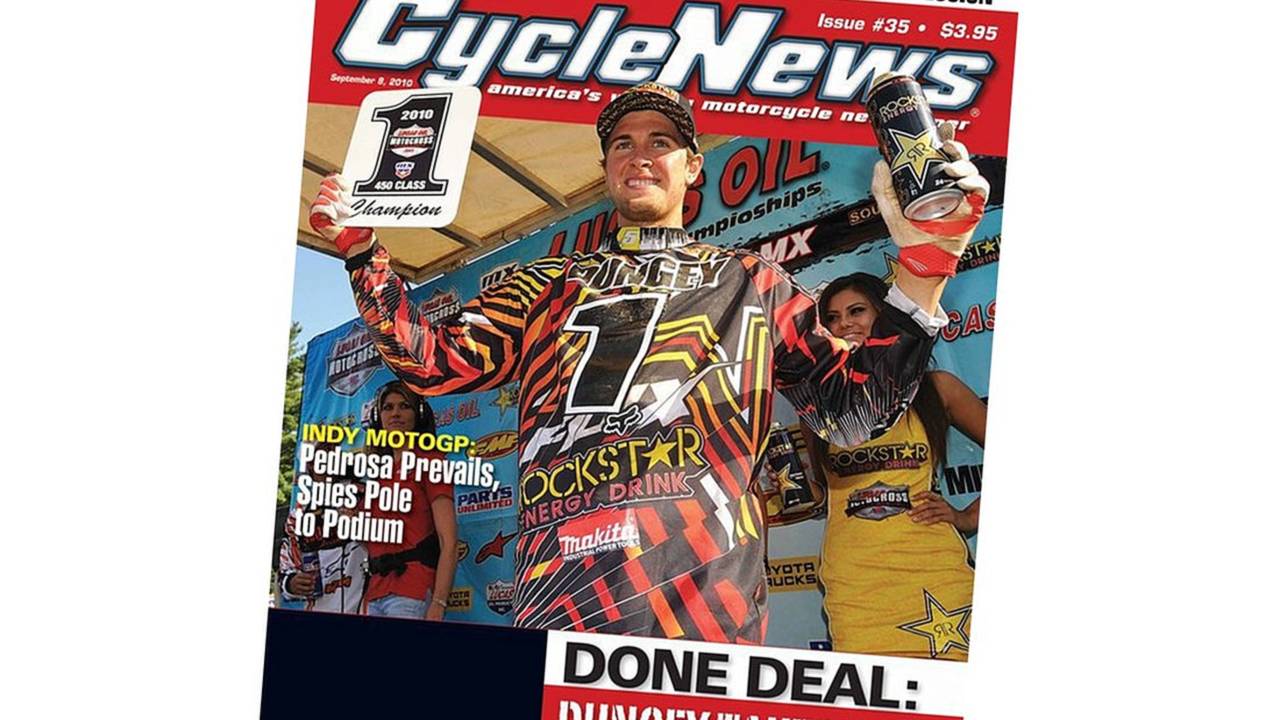 A Cycle News staffer has confirmed to Hell For Leather that this will be the last ever cover of the nearly 50-year-old publication. The magazine closed its doors last night, making it the second US motorcycle publication to do so this month, and yes, we are only on the first day of September. What’s happening? On July 1, we brought you news that 2Wheel Tuner would publish its last issue in Sept...

A Cycle News staffer has confirmed to Hell For Leather that this will be the last ever cover of the nearly 50-year-old publication. The magazine closed its doors last night, making it the second US motorcycle publication to do so this month, and yes, we are only on the first day of September. What’s happening?

On July 1, we brought you news that 2Wheel Tuner would publish its last issue in September, citing an inability to find a large audience and decreasing ad revenues. English magazine Visordown, formerly Two Wheels Only, went web-only earlier this summer too.

All three publications are victims of a general malaise effecting both the motorcycle and publishing industries. As both discover they’re no longer able to do business as usual, a sort of perfect storm is created; motorcycle manufacturers have less money to spend overall, increasingly they’re understanding that print isn’t necessarily the place to spend it and the publication’s ability to justify ad buys decreases with their readership and with increasing competition from a bunch of punk kids on the Internet. Publishers that are able to adapt survive, those that are stuck with a decades-old business model don’t.

At the risk of kicking a dead horse, it’s easy to identify Cycle News’s biggest problem. Its primary function was serving race results, information that’s been ridiculously easy to find online for well over a decade now. When you can find who won which motocross race on the race organizer’s own website, find emails announcing the win from the winning manufacturer in your inbox and umpteen other publications also publish the results, then what unique value proposition are you offering readers?

That right there is the crux of the matter affecting motorcycle publishing everywhere. Existing publications do too little to distinguish themselves. The same manufacturer-funded opinions on the same bikes doing the same wheelies and written in the same boring way do not make adequate content for more than one printed magazine or website. Add into that mix the sad fact that all other motorcycle magazines are competing for the same 47-year-old-plus white, male reader.

Not having read any of the above and assuming you didn’t know which industry I’m talking about, if I described to you a group of publications competing for a shrinking audience that’s increasingly irrelevant to their advertisers with identical content, you’d agree that I was describing a recipe for failure, right?

Crazier yet, the bike manufacturers themselves are, for the most part, unable to identify this conundrum. Apparently happy to accept a massively decreased ability to communicate with their potential audience, they shun not only the web, but any new publications too. Believe it or not, the head of street bike communications for a Big Four company told us two years ago, “Google is not an important search engine.” They’re content to focus instead on “supporting” their long-time buddies at magazines like Cycle News until such a time that the readership completely disappears. They identify advertising buys as “support” for magazines whose message they approve and who they feel are part of their marketing process, not as a way to reach potential motorcycle buyers or influence motorcycle sales. Secondary motorcycle advertisers (accessories and whatnot) follow along with the industry’s received wisdom or lack thereof.

The journalists at the failing publications? They send us their resumes.

If that paints a pretty negative picture of motorcycle publishing and the motorcycle industry’s inability to market itself, then it’s supposed to. Judging by our experience working with the motorcycle industry, neither has any idea how to dig itself out of this hole and, instead of acknowledging the need to climb out of said hole, is instead pulling the dirt on top of itself to shield it from the outside world. What’s that mean? Cycle News won’t be the last, not by a long shot.