How I Shredded My Gear, But Saved My Hide 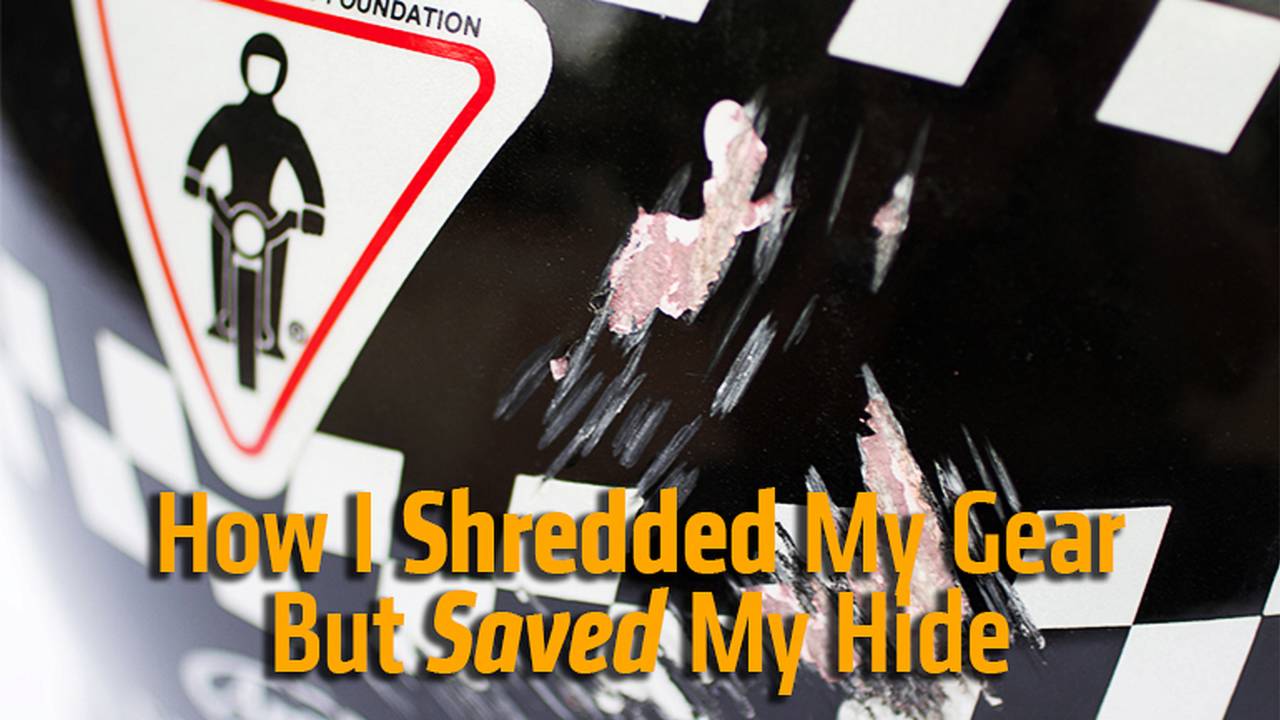 This accident will just further reinforce the importance of wearing high quality safety gear — all of it — on every single ride.

I'm the first to admit that I've been very lucky. Over thirty years riding on the street, and not a single crash to my name. Oh, sure, I've had a couple of parking lot tip-overs — but nothing with an injury, and nothing that would qualify as a crash. Until last month...

I picked up a 2013 Ural Patrol on a Thursday afternoon from the dealership in Harbor City, California. It was my first time at the controls of a hack. I took surface streets most of the way from Harbor City to downtown LA, where I had a meeting at the LA Convention Center. Once I felt like I had the dynamics of sidecar control down pretty well, I ventured on to the freeway for a stretch. I made it to my meeting without incident, and then geared up again for the ride home.

I am an ATGATT guy — All The Gear, All The Time. I made a promise to myself years ago that I would not compromise, no matter what the weather, no matter how short the ride. I've always kept that promise. I always wear a full-face helmet, riding jacket, gloves, riding pants and boots. That day was no exception.

I started up the Ural, confident that my gear was in place. It was 10:00 pm. I needed to get from the LA Convention Center to North Hollywood, a distance of about 15 miles. The only route I could think of was via the Harbor Freeway (US-110) and the Hollywood Freeway (US-101). I briefly considered taking surface streets, but decided that the Freeway was the safer route at this time of night.

I entered the freeway and merged with the steady traffic. I took the interchange, switching from the 110 to the 101, riding confidently at about 50 miles per hour. Just a few exits up the road, everything changed in a heartbeat.

Just north of the Alvarado exit, approaching Rampart Boulevard, I was riding in the number two lane. Suddenly, I realized that I was tumbling down the freeway. I caught glimpses of the Ural sliding down the number two lane ahead of me, sending a shower of sparks and tufts of flame into the night air. I ragdolled down the pavement, conscious of the experience, but unable to affect my trajectory. I wasn't scared, I wasn't hurt — yet, I remember thinking, "This sucks."

After about a hundred yards of tumbling, I came to a rest on my face. I jumped to my feet, looked around, and quickly made my way to the center median to assess the damage.

A young couple pulled up behind my bike in their Jeep Commander, and put their hazard lights on to keep anyone from hitting the Ural, which came to rest in the number two lane with its sidecar in the air.

"We thought you were dead for sure," the young woman said.

I thanked them for their kindness. The boyfriend wanted to leave right away. The young woman wanted to make sure I was okay. I took off my helmet, and took a closer look at myself. My ankle hurt; my left thigh hurt and my right hip hurt. But I could tell that nothing was broken. There was no blood. I realized that I was going to be okay, and my mind cleared.

The boyfriend convinced the young woman that it was time to go, and the couple drove away.

Another SUV had stopped in front of the Ural. Two big guys, obviously bikers, called me over. They tipped the bike back up onto its wheels, and waved off traffic as we pushed it across three lanes to the right shoulder. The guys told me that they'd witnessed the accident, and gave me contact information in case I needed it. They said that a pickup truck had come up behind me, and swung around to the left to pass. His back bumper clipped my rear wheel, and that's what put me on the pavement.

I thanked the bikers for stopping. They hopped back in their Tahoe and drove off, just as the California Highway Patrol car arrived. The CHP officer took my report, and took the information about the witnesses. I pulled out my American Motorcyclist Association card, and called the roadside assistance number on the back. By the time I had finished filling out the accident report with the officer, a flatbed truck had arrived, the bike was loaded, and I was ready to head home. By 11:00 pm, I was in my living room, the bike was secured in my back yard.

After hugging my wife and petting my animals, I inspected my gear.

The Gear I Was Wearing:

My helmet had scrapes across the chinbar and face shield, a gouge out of one side and scrapes on the other.

My jacket, which had been brand new, now looked weathered and scraped. It showed where I had slid along the road on my back for some distance — right where the optional back armor was installed. The collar was frayed, some buttons and snaps worn down, but it was pretty much intact.

My gloves, which featured carbon fiber knuckle protectors, had done their job. The knuckle guards had ground down on both hands, but neither had ground through.

My riding pants were Kevlar-lined jeans. Some of the denim covering had worn through, exposing the Kevlar lining. But the pants did their job, and did not fail. My leather belt also showed the scars of a slide down the pavement, grooves of wear that give me chills every time I look at them.

My boots came through unscathed, showing little or no evidence of having been through a crash.

I didn't notice until the next day that my watch had also taken a beating, its bezel having been ground down and crystal missing. It was an inexpensive Seiko, but it looked like it had done priceless duty saving my wrist from injury.

I didn't escape completely unscathed — my left forearm was scraped through the jacket, and my back, over my right kidney, had picked up a few scrapes where the jacket had pulled up. I didn't have many visible bruises, but my left thigh was deeply sore, as was my right hip. I took some ibuprofen and crawled into bed.

Over the next few days, the pain dulled into soreness. I found myself extremely tired, and I walked with a limp for a few weeks. Now, a month after the accident, I feel about 80 percent myself again, almost ready to resume my workout schedule (not looking forward to that).

Looking back over the accident, I hope I've learned a few things.

First, I wish I had trusted the nagging feeling that I wasn't at my best on the sidecar hack. I don't think there's any way I could have avoided being hit by a careless driver, but I can't help blaming myself for the incident in some way, and feeling that I wouldn't have been in a position to be overtaken if I had been on two wheels instead of three.

Second, I wish I had gone the next step and worn armored riding pants instead of just Kevlar-lined jeans. It would have been less comfortable and less convenient, certainly, but I would have lost less time to injury and discomfort after the accident.

Third, not to be too self-congratulatory, I'm glad that I'm an ATGATT guy. Looking at my gear, I'm sure that my injuries would have been much more serious if I had not been wearing all of that high quality protective gear. I'm glad that I chose a geeky-looking full-face helmet, even though a retro half-helmet would have been cooler and more comfortable on that old-fashioned Ural.

Inevitably, friends and family have asked me if I will ride again, now that I've tasted the pavement. Won't I be scared? Wasn't this a warning?

I have always accepted the possibility that I might go down some day. Anyone who doesn't is kidding themselves — there are just too many variables involved. But I won't let the reality of a crash keep me from riding. This accident will just further reinforce the importance of wearing high quality safety equipment — all of it — on every single ride, and to maintaining focus and concentration in all riding situations. I will wear armored riding pants from now on; and I will be more conscious of visibility from the rear, especially at night. It's possible that that pickup truck driver didn't see me well, and that's why he clipped my tire and put me on the ground.

I will continue to ride every time I can get on two wheels. I might have to think twice about driving another sidecar hack, but I'm sure I'll try that again when I get the chance. I'll insist on a bit of actual training, and I'll avoid one of the busiest freeways in the world on my first day of riding this time.

I'm grateful to all of the gear manufacturers who protected my hide, and I'm very thankful that I didn't have a passenger in my sidecar, and that no one else was injured in the accident. I will ride again.

The Gear I Was Wearing: