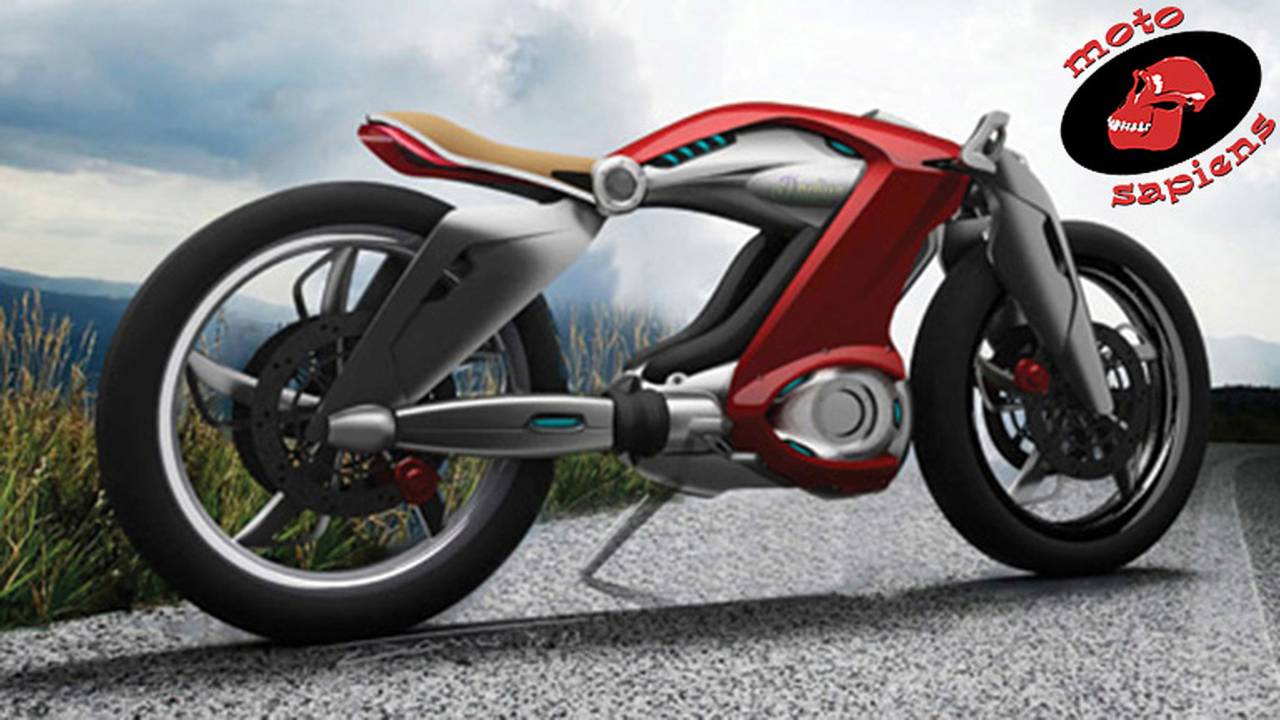 A Future Indian?As Moto Sapiens, we have a great pantheon of gods, muses, heroes, and nymphs. Speed, of course, is the chief of our Olympians. ...

As Moto Sapiens, we have a great pantheon of gods, muses, heroes, and nymphs. Speed, of course, is the chief of our Olympians. There are many others, including Lean, Noise, Stink, the Torque Twins (engine output and bolt tightening), Asphalt, Luck, and Rollie Free. And Design. Today we’re visiting the Shrine of Design to ask the oracle for some good news.

If you’re like me, you’re hungry for modern, innovative design in motorcycles. Yes, there are cool new things happening, but it’s mostly at the fringes of the industry, while the core of the motorcycle market seems stuck in predictable designs and putting new make-up on old hogs. Are we on the brink of an age of innovation, or inertia-bound by cautious marketing departments? This was the question we brought to the oracle. Of course, oracles never give definitive answers, but she uttered an incoherent incantation and pointed us to the Bright Design Challenge.

The Bright Design Challenge is an annual student design competition held by the National Association for Surface Finishing and the College for Creative Studies in Detroit. CCS is one of the leading design schools for transportation design and a major feeder for the automotive industry. It’s a great place to go to find eager, creative young people who are passionate about transportation design. The NASF is an industry organization that promotes education, advocacy, and research in the area of material finish treatments. Think anodizing, plating, galvanizing, painting, and so on. Cool technical stuff.

There is also a corporate co-sponsor for the Bright Design Challenge. This year it was Polaris Industries, and students were tasked with designing a new Indian motorcycle. They had to study rider demographics and create a design that would “embody the DNA of Indian” and understand that “the heritage of Indian products will be a prime input in the research and resultant design.” The design could be a sport bike, dual sport, scooter, or a replacement for the venerated “Scout.” Plating or surface finishing had to be addressed in the design, naturally. Now, if you think that all this talk of DNA, heritage, and the Scout means we are trying to re-create 1953 here, just take a look at the winning entries.

Design competitions are meant to showcase excellent design that might not otherwise see the light of day, and I think this one nailed it.

First-place winner James Yu’s aggressive, sporty electric naked bike is lean, clean, and full of well-designed details. I love how he makes a central design element out of the electric motor, something current electric bikes don’t do (yet?). Check out the vertical rear swing-arm. I’m not sure how or if that works (we have to give design students a little practical latitude on some engineering matters for these concept sketches), but he uses it to create a great visual symmetry with the Wraith-like front forks, giving the whole frame an arched springiness, like a sabertooth tiger skeleton. The hand grips alone are a major Why-didn’t-I-think-of-that. The subtle Indian branding is a nice touch; if this bike were actually made, the distinctiveness of the design would be branding enough.

Andre Ayala’s second-place design is the only winner to feature Indian’s much-hyped Thunderstoke engine. (If I were more cynical, I would’ve guessed that the corporate sponsor would have required using this engine, but no, the designs could be electric or internal combustion.) Imagine putting a compact torque monster like that engine in a light, short, nimble frame. Nellie, I’ll be home late! Ayala’s design is my favorite, in that it’s the one I really want to own. I guess I’d call this a space cafe racer. This reminds me a little of Roland Sands’ breathtaking BMW Concept 90. The tiny flares on the fender are a very clever, updated nod to Indian’s distinctive bell-bottoms. I think this one really nails the “DNA” idea – it’s not retro at all, but you could see this as the heavily mutated grandbaby of a real Indian Scout (it even has lace wheels!).

James Thetard’s electric bike took third. This is what I would call the most “stylized,” with a unified form brought together by bodywork that almost looks Art Deco. It is sophisticated, not as raw or guts-out as Ayala’s cafe, with some innovative ideas for battery access and integrated removable storage. I like the combination of old-fashioned leather and straps with very modern shapes and surfaces.

Tyler Charest took an honorable mention with his straight-on, no-bullshit sport bike. The mill appears to be a V-twin, but not the Thunderstroke. Aggresive and pouncy. Would you tap that? Yes, you would. Wouldn’t you just love to see the Indian logo on a world-class sport bike like that?

Now, I don’t expect these designs to be the fully realized output of a professional team of engineers – these guys are juniors in college, after all – but I was impressed with how mature and pulled-together these designs are. These aren’t outlandish Manga-slash-Transformers robomonsters that you might expect from “kids these days.” If the industry wants to attract younger riders, these should serve as inspiration. Young people want to lean forward in the saddle, not back. They are hot for new tech (duh), especially electric bikes (almost all my students are very interested in electric motorcycles). They are open to new shapes and forms. They – we – need fresh ideas as much as heritage.

Now, design competitions are great, but reality is something else. Remember the New York “Freedom Tower” design competition? And look what we got for that. Ugh. It’s not like these students’ designs are being handed off to engineers to work on setting up the machining. It’s a long, long way from inspiration to my garage, but I think it’s important that we do look at designs like this as inspiration, not just a fun exercise. The attitudes of these designs need to filter into motorcycle design culture. If this is the kind of thing that turns on Indian’s new leadership, maybe they don’t need to just be “the other Harley.”

So I asked the oracle if this is where we’re going. Will the rising generation of designers turn our dinosaur malaise into hyperevolution? She bent down, she turned around, she gave me a wink. She shrugged and muttered an incoherent incantation. Stupid oracle. All I really want to know is, when can I pre-order my space cafe racer?