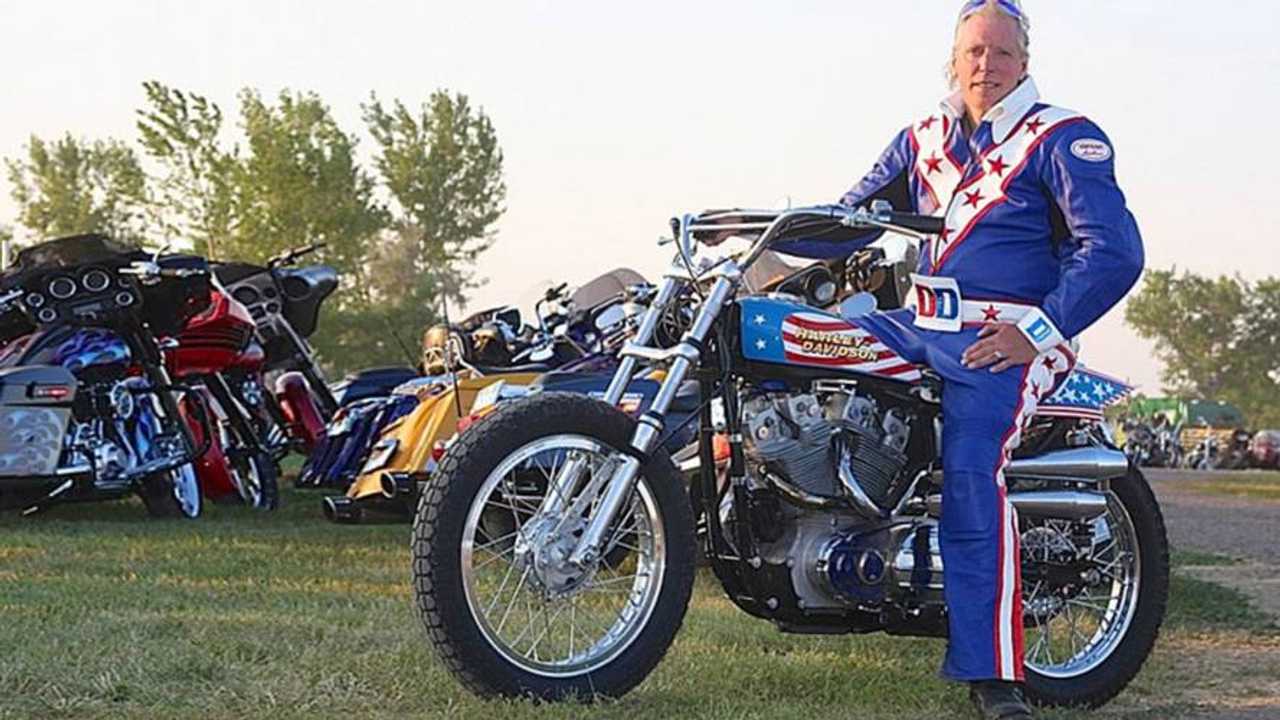 Doug Danger Will Attempt 22 Car Evel Knievel Jump at SturgisFollowing in the footsteps of a stunt legend isn't easy, especially if that legend broke...

Following in the footsteps of a stunt legend isn't easy, especially if that legend broke 433 bones during his illustrious career. That legend was none other than the insane, egomaniacal and publicity master known as Evel Knievel.

Back in the day, Evel dominated the news with daredevil stunts that the world had never seen before. Jumping crates of snakes, cars, buses and canyons, there was nothing Knievel wouldn't try, and the numerous times he almost died and supposedly retired were followed by new attempts at death-defying stunts. Frankly, it's a miracle Knievel lived as long as he did—to the ripe old age of 69—given everything he did during his reckless career.

And though Evel has been dead since 2007, his legacy lives on: Doug Danger will try to jump 22 cars, a feat even Evel couldn't complete back on September 1, 1972 in Monroe, Washington. Danger has his stunt chops hard earned after an illustrious career pulling the same kind of stunts as Knievel.

Doug Danger will take to the air at Sturgis this August, but not with the latest in motorcycling. He'll go whole hog by using Evel's very own vintage 1972 Harley-Davidson XR-750 at the Sturgis Buffalo Chip amphitheater.

The frightening part isn't just the insanity of the jump or the age of the bike, but it's the fact that the XR-750 was designed primarily as a racing bike. Plus it's too big and heavy to clear the distance—as well as take the hard impact Danger will undoubtedly take.

This is also the very kind of stunt that signaled the end of Knievel's illustrious career. In 1972, when Knievel tried the jump, he was warned that the XR-750 wasn't fast enough to make the distance. Nothing has changed since then since the only modification made to the original motorcycle is relocation of the footpeg to accommodate the taller Danger.

In 2001, another stunt rider by the name of Bubba Blackwell (who had beat Knievel's 19-car record with his own 20-car jump in 1998) attempted the same 22-car jump with horrible consequences. He missed the landing and flipped end-over-end, nearly killing him. He was hospitalized in a coma for three months. Nevertheless, Danger is still going for it.

“This is the one jump Evel couldn’t make; he failed. I’m determined to succeed where he fell short,” Danger himself said. “I know it’s dangerous, but death has had me by the throat twice in my life, and I spit in its face. When God’s ready, he’ll take me.”

On Aug. 6, 2015 at Sturgis Motorcycle Rally's 75th Anniversary, Doug Danger will attempt Evel Knievel’s 22-car jump on the original XR-570 while wearing a classic Evel Knievel stunt suit and a custom-fitted Bell Star Carbon, which is probably the only thing remotely modern being used for this record-breaking attempt.