RideApart’s Most Popular Stories of 2013 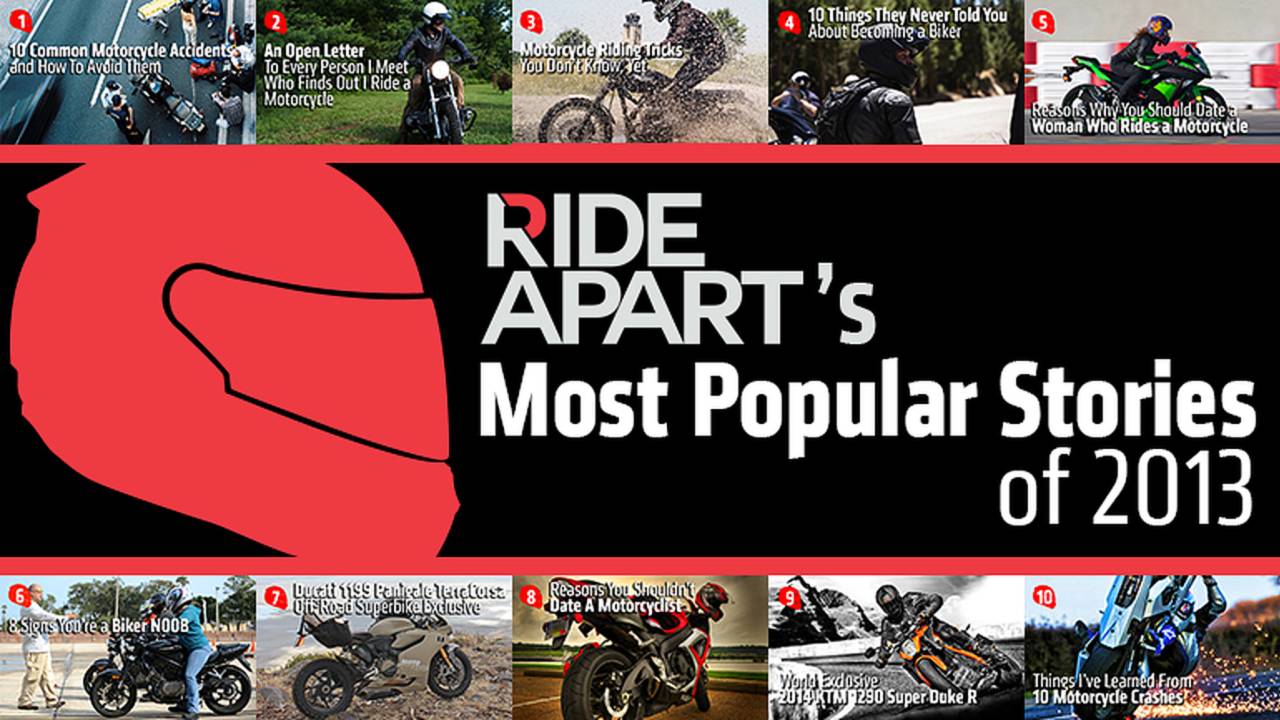 The numbers are in and these are the ten most popular stories of 2013 on the RideApart website.

During our inaugural year we've bagged exclusives, reported on countless news and photo leaks, delivered rapid fire EICMA coverage, and so much more. Now, the numbers are in and we can reveal the ten most popular stories of 2013 published on the RideApart website.

When you get paid to ride and write for a living, the chances of an accident increase due to more time spent in the saddle on a menagerie of different motorcycles, in varying road and weather conditions. Then you add in the human factor and sometimes the trip is not always as smooth as we'd have liked. We've got some crashes under our belt, some minor, some serious, but each was an opportunity to write a story, discuss what went wrong and to learn a thing or two. Here is the wisdom gained by RideApart's Wes Siler after no less than ten crashes.

RideApart brought you the first images and specs on the 2014 KTM 1290 Super Duke R before any other website. The images of this 180 bhp naked production bike landed in our lap and it was all hands on deck as we raced to get them online. We did not know who else may have also received them, but we knew this would be a home run if we could pull everything together fast. Turns out we beat the pack, got our story up first and as a result it was shared all over the internet.

#8 Reasons You Shouldn’t Date A Motorcyclist

This story was actually suggested by the wife of author Jon Langston. I don't know the backstory or why she felt the need to warn the female population en masse, but her husband wrote an epic top 10 list that included everything from being a cheap date to unattractive scars — there is also item #8 which I really can't bring myself to type about here in detail.  It's certainly not the experience every gal has had (myself included), but it did make for a fun story.

Our friends at MotoCorsa took a Ducati 1199 Panigale and swapped out the tires for off-road Continental TKC80s. Why? Because they could. They kept going and dropped the forks, raised the shocks and altered the programming. After giving it a Desert Storm paint job, they took it on a 1,200 mile adventure and gave RideApart the exclusive. Many of you also thought it was a job well done because you clicked on it enough times to make it the 7th most-viewed story on our entire website.

Sean MacDonald really aimed for the fence with this one. From "You choose your helmet based on your motorcycle" to "If you don’t rev your bike at idle, it might die" this fun piece entertained us as much as it did you. To this day, "Suns out, guns out" stands as one of RideApart's best one-liners. Still, item #5 on the list caused a bit of controversy — to the tune of 168 comments — as we were called out for making a living by doing just that. Point taken.

Reasons Why You Should Date a Woman Who Rides a Motorcycle

Considering that we only posted this story two weeks ago and it still landed at number five on our list is pretty impressive as far as we are concerned. It also nabbed 10,000 Facebook likes, generated 161 reader comments and was shared via Twitter 129 times. Guess it's safe to say you are as frustrated with dating as we are? The good news is that author Heather McCoy makes it clear why dating a woman who rides is where it's at. Now you just have to find each other...

Things They Never Told You About Becoming a Biker

#4 Things They Never Told You About Becoming a Biker

RideApart's Tim Watson shares some things they never told you about when you set out on your quest to become a biker. Realizing you have somehow become a better meteorologist than the guy making six figures on your local news channel is just the tip of the iceberg. While we only posted the best ten, you came up with a lengthy list in the comments section chock-full of facts you wish you had known before getting your M1.

The challenge of motorcycling is half the fun and thankfully it's one of those sports where you will never know it all and will always be able to do it better. To that end, we decided to show readers how to be smoother, safer and faster by breaking down riding techniques — those little things you always wanted to ask about — one step at a time.

We are going to go out on a limb and assume that you've had this fantasy conversation in your head with naysayers more than once. Why? 19,000 Facebook likes can't be wrong. Nor can 249 reader comments (a.k.a. rants) about something that is clearly near and dear to your heart. On a personal note, I've never seen "Sausage Creatured" used so expertly in a sentence before.

Common Motorcycle Accidents and How To Avoid Them

#1 Common Motorcycle Accidents and How To Avoid Them

When riding a bike, you need to be able to put all of the odds in your favor and you do that by using the tools you have at hand - your bike, your brain, your body and your gear. We break down the most common situations that result in accidents for riders and show you step-by-step how to avoid a crash. Read and learn, this one could save your life.

Did your favorite RideApart story make our list? If so, which one was it? If not, which story did you like the best? Tell us in the comments below.