Learning To Slide With Shelina Moreda 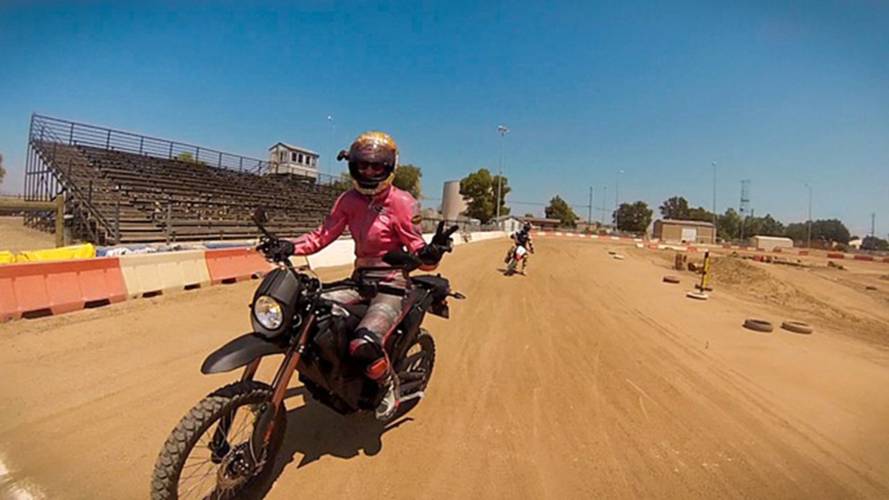 Learning To Slide With Shelina MoredaShelina Moreda races Harley XR1200s and a Brammo Empulse in TTXGP. She also runs a dirt track school for women,...

Fear is bullshit. A guy known as Anagram Mickey calls fear “False Evidence Appearing Real”. Although I’ve been riding motorcycles almost daily since 1985, and on R1s since 2002, I’ve always been afraid of sliding. The longer I’ve ridden, the worse this fear has grown. To the point where I will tiptoe my R1 across the tiniest bit of water or gravel, not even wanting to ride over so much as one pebble for fear it will kill me. I knew dirt track experience would ease this fear. So, I took one flat track school 10 years ago. Yeah, that’s not really enough. It has to become a normal experience, sliding a bike around in the dirt, for one to become truly comfortable with it.

Last December, I highsided my R1 because I had switched from a tire that heats up quickly to a tire better known for enduring long, hot track days. I didn’t realize this or do enough research before making the switch, so riding it like I do on a cold December night, I started to slide making a left turn on a city street. I did the first thing most people would do and slammed the throttle shut. Which, of course, caused the rear to hook up again, which of course confused the hell out of my poor R1 which then violently shook the offending rider off into the air. I came to hours later under a hospital sheet, wondering what they’d done with my clothes and pissed as hell I’d had yet another concussion.

In April, I took delivery of my dream city bike, the supermoto I’d always wanted. The Zero FX came with knobbies, which I promptly had swapped for street wheels & tires. I knew one day I’d make it to a dirt track school, and this weekend Shaq (my FX) and I finally did. Shelina Moreda, one of my favorite people and a damn good racer, holds a camp, Fast Girls Dirt Skills Camp.

We started the morning with a little free riding warmup to get accustomed to the track, then had a riders meeting where she explained the morning’s drills to us. We then went out and practiced. And practiced... The drills were intense, and were all aimed at improving our body positioning, ability to slide the bike through a turn, and then some. I started the day frozen in abject terror from the first lap. My morning superpole was 1:28. My afternoon superpole was 1:20. So how did I drop 8 seconds in one day? By working through the fear, and not letting it rule me. By listening to the feedback from my instructors. By watching them and copying them as best I could, especially dirt queen Michelle DiSalvo.

In the afternoon, I was so exhausted (emotionally drained more than anything) I had to take an extra break. I sat down and acknowledged to myself that I was still alive, hadn’t crashed, despite sliding the shit out of that FX all day. Shelina did her best to coax me back out and soon I was ready. I also found that the stuff which doesn’t bother me a bit on a roadrace course was freaking me out on the dirt track. The sound of bikes following me was making me nervous. Since we couldn’t ALL be on bad-ass electric motards, I went ahead and put my earplugs in. That made a huge difference and I was able to ride more confidently.

By the end of the day, sliding still felt scary and strange, but I could control it. Even though I’d glazed my rear brake pads, I could tell how much harder I needed to stomp on that pedal to make it work. I also felt damn proud of what I’d accomplished. I even rode through the freshly watered track feeling the FX sliding left and right when I only wanted it to slide right, or to just go forward. But I continued on, manipulating the throttle enough to not have to slow down too much. It was really an epic experience every canyon carver/track day maestro/roadracer should try. Brok McAllister’s California Supermoto Schools hosted the event, so if you’re not female and want to get over your fear of sliding, check them out. Follow Shelina Moreda Racing on Facebook to get the scoop on when her next school will be held. It may even be at Texas Tornado Boot Camp again!

Some of you may be wondering how the Zero FX fared, especially after a full day of hard dirt riding. Well, I forgot to check the tire pressure, so apparently whatever I had it at was fine for a newbie. The batteries? Well, they ran through 35 percent that day, a lot less than I used in a track day at Laguna Seca where the quick charger accessory was indispensable. Sure, it’s a tall bike (hence the name Shaq), but I’m not exactly short at 6’ with a 34” inseam, so I felt much more at home on the FX than the little XR100’s the school uses. Plus that whole clutch and gears thing of the gas bikes was so annoying. When you’re learning at low speeds it’s so nice to not have to worry about what gear you’re in or any of that nonsense.

The 2013 Zero FX comes with a 5.7kWh battery pack, 44hp motor and 70lb-ft of torque. Top speed is actually 75mph (in my experience) and weight is just 275lbs. The torque, top speed, regen and regen under braking are all fully adjustable with a smartphone app. I kept my torque at max, even though it took my poor teacher by surprise when she tried to show me something on the bike, and I dialed the regen down to 68 percent (from 87) after being on one of the XR100’s for a drill. Having the regen set pretty high forces me to notice when I’m closing the throttle and by how much, an important skill for anyone who wants to avoid highsiding.