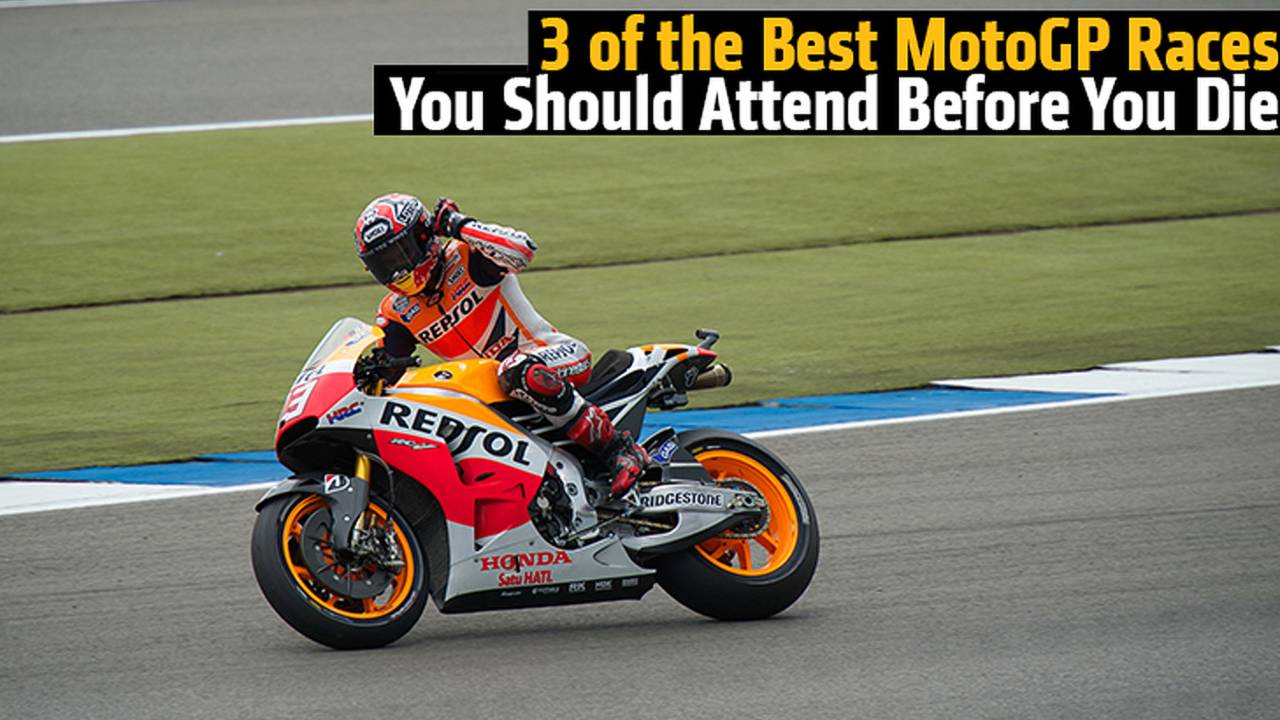 Italy, Germany, and the Netherlands are home to some of the best MotoGP events in the world. No racing fan should should go with attending these 3 best MotoGP races.

This famous Dutch circuit has been on the Grand Prix calendar since 1949 and the villages around the current facility hosted the first 17.75 mile TT race held in the Netherlands back in 1925. A high performance race machine carried a 55 mph average speed back then, so Assen is considered the granddaddy of racetracks. It has been there through the entire evolution of motorcycles and the men who raced them.

Flat, sweeping and fast, the Assen TT is known by gear heads and moto maniacs as the “Cathedral of Speed.” The 2.83-mile course is a very popular place that hosts World Superbike, British Superbike, Moto GP, and IDM (the International German Championship) every year. It also hosts club racers and track day goers from all across Europe.

Come prepared to mingle with over100,000 friends if you plan on ever visiting Assen over a GP weekend. Fans travel from the UK and Northern Europe to watch their home GP. Assen is the closest GP track to Scandinavia, and besides Donnington, the Brits have no other options besides Assen— unless they want to fly to Spain or Italy.

During a GP weekend, the A28 highway that runs east of the circuit is the primary artery into Assen, and it swells beyond capacity with thousands of motorcycles en-route to the track—especially on Sunday. On one race day in 2014 the rain was torrential. It was hairy in a car to navigate, yet it wasn’t a problem for thousands of motorcyclists. It was just plain mad seeing all of them out there in two inches of standing water.

The view from turn one (Haarbocht corner) provides a great view looking across the track to turn two and three. It's also a prime location to watch the action unfold at the end of the start finish and onto the straight. De Strubben corner (turn five) is a hairpin with lots of action that you don’t necessarily get to see on television. The Stekkenwal section—before turn eight—has up close and personal seating above the track.

If you’re a motorsports fan and you know some history, watching any event at Assen is a special experience.

Nestled in the Tuscan hills 30km (18.64 miles) north east of Florence, the l'Autodromo del Mugello is gorgeous and is the jewel of Italian motorsports in that respect. It’s perhaps not as historically significant as Monza or Imola; however, Mugello Circuit—comprised of the 15 turns and 3.259 miles in length—has been a regular host to the Italian Grand Prix since 1994.

The circuit was constructed in 1973 and opened in 1974, a few kilometers from the original road course that was built in 1914. Ferrari has owned Mugello since 1988 and through several renovations since its original construction back in 1914, it’s now known as one of the safest and fastest racetracks on the planet.

Mugello has the longest straight on the Moto GP calendar: It’s 1.141 km (0.709 miles) in length and provides for some exciting entertainment. Watching this on the internet or HD TV doesn’t do the view justice. Mugello provides wide and far-reaching views from the hillsides surrounding the track and paddock, and there are locations where fans can see across the entirety of the circuit. Sitting on the hillsides above the break zone, spectators are treated to roaring motorbikes violently slowing to the edge of calamity for the right-hand sweep into hill turn two.

For anyone who doesn’t already know, Mugello is Rossi’s house. Better yet, it's his temple. Rossi’s yellow clad fan club on the grassy hills overlooking Turn two (Luco corner) adds to the unique experience of watching a GP at Mugello. The Ducati Grandstand, which is located at the Correntaio curve, takes a year in advance to secure tickets, but is a must for die hard Ducatistis.

Italians live, eat and breath racing, and when Valentino Rossi is on his game, there is nothing like seeing over 100,000 people go completely mad. Throughout a GP weekend, two stroke noise-makers have never ending rap battles (the internal combustion kind). These engines are heard non-stop along with the cheers and waves that follow Valentino Rossi at every corner.

The customary track invasion starts when the checkered flag is out, and it's chaotic to say the least. Fans enter the track through “open” gates and streak aboard bikes, scooters and on foot to the start finish. I’ve seen three people on a Yamaha R1 doing wheelies and watched scooters carrying smoking flairs, all while the riders were wearing little to no clothes. It's brilliant, albeit a little unnerving.

If you want to see a once in a lifetime event that will cement any doubts about the speed and ferocity of Moto GP machines and there pilots, visit Mugello... CONTINUE READING

CONTINUE READING: To the next page to see the third and final track you must visit before you die.

At 2.281 miles, Sachsenring Circuit is shortest circuits on the GP calendar, but what it lacks in size is compensated by its layout and undulating topography. It’s been hosting Moto GP races since 1998.

The track was constructed in 1996 and is known as one of the newest in Germany. It serves as an ADAC (AAA US equivalent) driving center primarily due to the stringent noise restrictions that have been placed because of its close proximity to residential areas. There are a very few times a year professional road racing is held at the track and the noise limits are overlooked.

When it comes to atmosphere, Sachsenring is King. It's part county fair, part rock festival, and part celebration of things that go vroom. The track may be short in length, but it's great because it makes the whole experience a little more intimate for fans. From afar, the circuit looks like it’s cut into the hills, and this provides stunning views from almost any vantage point around the track.

The track has 10 left corners and only three right corners. Why is this even mentioned? Because this makes the racing unpredictable and fun to watch. Every rider on the grid is battling not only each other, but also their own tires. With the track renown for abusing rubber, Bridgestone builds special asymmetric rear slicks to handle the pounding heat that GP bikes create at Sachsenring.

If you’re at Sachsenring, there are some areas you need to check out. Turn one at the end of the downhill drop (nicknamed The Waterfall) is where riders reach 170mph and then break down to 70mph on their front tire by Sachsen Corner (turn 12). The Waterfall can be seen from the grandstands at the bottom of turn 12, and it’s quite frankly scary (in a good way) to watch in person.

The racing is always fun to watch, but the party is just as big at the Sachsenring. Germans camp out from Thursday to Monday morning for a race weekend and it's hard not to make friends in the campground or standing in line for a bratwurst. You don’t have to sprechen the Deutsch to enjoy Sachsenring though. It’s a place where words cannot describe the excitement it provides—you just have to go see it in person.

READ MORE:  10 Driver Fails To Watch Out For On Road Trips ... - RideApart