How To: Not be a Noob at a Track Day 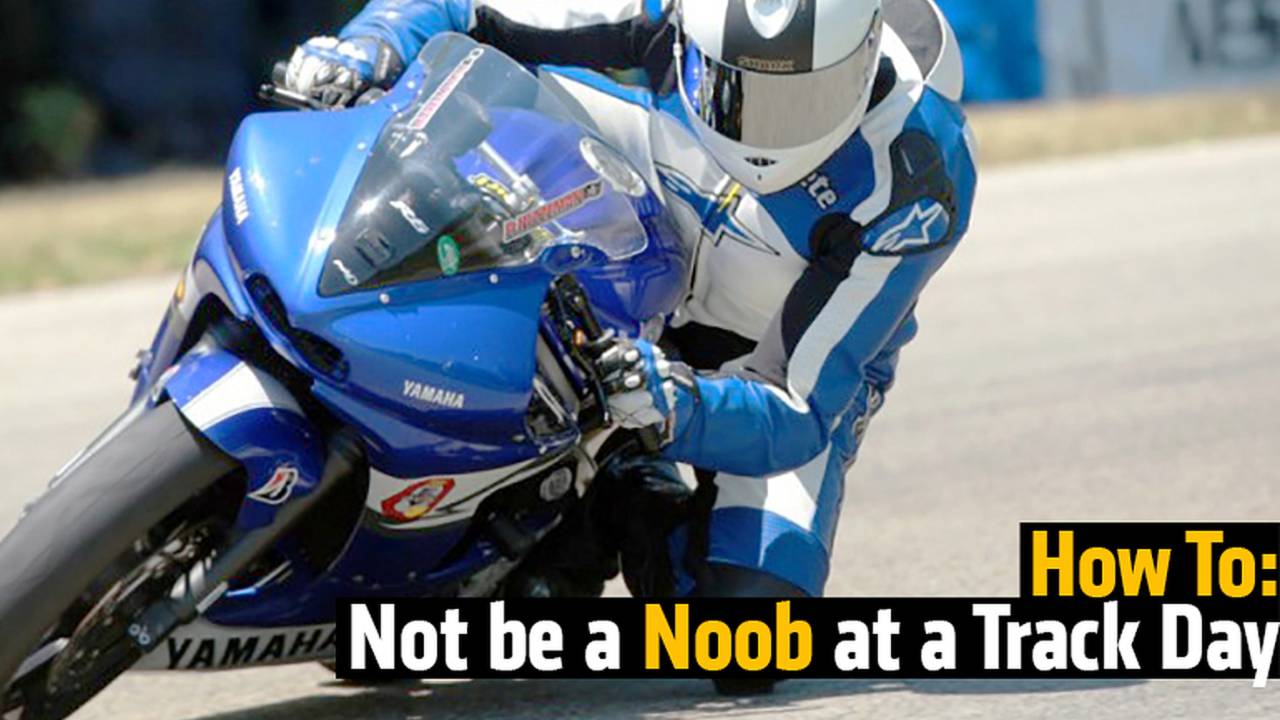 Don't want to look like a total noob at your first track day? Check out our top 10 tips to avoid some of the biggest mistakes newcomers to the track make.

So you've finally stopped making excuses and signed up for a track day. But now that you've made the decision, you're nervous. What do you actually need to do? You've watched a hundred videos on the interwebs, you've talked to your buddies who've been before, but now it’s the day before, and you’re terrified.

Fear not, my virgin-kneepucked friend. We’ve got some tips for you that will make sure that, even if you’re the slowest guy or gal out there, at least you won’t look like a total noob while doing it.

If your bike looks like this at 11pm the night before you're supposed to be at the track, you're doing it wrong. (Photo by Pete Hitzeman)

The night before. And early enough to get a good night’s sleep, too. Don’t be the dude who’s frantically slamming Red Bulls and sloppily taping over all your glass bits while the guy on the PA is announcing that tech inspection will close in two minutes. Track time is expensive and intense, and you’ll want to be as calm and focused as you can be when you get out there.

The week before your event, go online and find out the bike prep requirements for the class you’ll be running. Make a list of what you’ll need to do, and then do it before dinner the evening before your event. That way when you get to the track, you’ll have that much less work before the track goes hot, and you won’t be a hot mess.

Stands, tools, full gas cans, coolers full of food and hydration, camping chairs and a pop up tent, at a minimum. Oh, and THE KEY TO YOUR MOTORCYCLE. My typical track day spread now fills the bed of my truck and a 6x12’ trailer, and I’ve used all of it at one time or another. There is no more miserable feeling than getting to the track and not having something you absolutely need. Especially that pop up tent, if the track you attend doesn’t have garages.

Go to the riders’ meeting and pay attention

If this is any sort of “first” for you–first time at the track, first time at this track, first time riding with this organization, first time in whatever class you’re running—this is especially important. The riders’ meeting isn’t just a pleasant formality, and while some of the information may be common sense, much of it is critically important for everyone’s safety. Knowing the passing rules for your group, how and where to enter and exit the track, and other crucial details will keep you from potentially getting your ass chewed by one of the staff, or worse, getting plowed by another rider.

Use the first session, or two, or hell, the whole morning to get used to the environment you find yourself in. Find out which way the track goes, follow a control rider around to see the lines and figure out what bumps or pavement imperfections you may have to deal with or avoid. Morning sessions are commonly more slippery than the rest of the day, thanks to moisture on the race track. Don’t be the dude who shows up and tosses it into the weeds in the first 10 minutes, because you thought it was SuperPole. (Read more about track day strategy here.)

My "pit" at my first ever track day. Complete with less-than-impressed girlfriend. (Photo by Pete Hitzeman)

You cannot win a track day

But you can certainly lose one, by piling up your shiny motorcycle in a sand trap or into a tire barrier. Winning is for races, and you’re probably not that fast yet anyway. If you’re stuck behind a rider who’s slower than you but impossible to pass (which is common at a track day), just pull off and roll through the pits, nice and slow. That’ll give Sir Parks-at-the-apex a 15 or 20-second gap ahead of you, and you some clear track to play with that’ll likely last the rest of the session. It’s a much better solution than spending fifteen minutes chomping at the same back wheel, and safer too.

Get out of the way

Speaking of hard to pass, don't be. If you were in a race, defensive lines make sense. At a track day, they just make you an ass. Be smooth and predictable, and don’t decide halfway through a corner that you want a break. If you want a break, tough it out until you get to the pit exit area. Pulling up at turn five at a 15 turn track is a great way to get a tailpipe full of superbike. The scariest moments I’ve had on the racetrack have been courtesy of new riders suddenly changing speed and direction at an inappropriate time and place on the track.

Don’t be a straightaway hero

Unless your track day is at a drag strip, nobody really cares how fast your 1000cc fire-breather can go in a straight line. If you’re hurtling down the straights at such a speed that getting slowed down for the following corner is scaring you, you’re probably frustrating the riders behind you when you have to tiptoe to the apex. Instead, use a moderate enough throttle setting that you aren’t overwhelming your sense of speed.

It is a race track, after all, and you didn’t come here to ride the same way you do in the mall parking lot. Open the throttle on the straights enough that you aren’t a rolling chicane for the riders behind you. Closing speeds can swiftly become difficult to judge at the business end of a long straight, so if you’re only doing 60 when everybody else is winding up to 140, there could be a really ugly problem.

On the right, a well-sorted pit. On the left, a slightly better-sorted pit. (Photo by Pete Hitzeman)

Cramping sucks. Cramping at a buck-forty, in a kink, in a group of five other bikes, sucks way harder. Give your body the fluids and electrolytes it needs to deal with the incredible demands you’re putting on it. Drink twice as much as you think you should. If you're feeling thirsty, you're already well behind the curve. Remember, you’re wrapping yourself in thick leather, straddling a hot engine and doing lower-range squats for twenty minutes at a time. You’re pumping out an incredible amount of sweat. Drink accordingly. (Read more track nutrition tips here.)

It isn’t too much fun to be tooling around the track, blowing apexes and missing brake markers because you’re fatigued. Believe me, it isn’t fun for the riders around you, either. If you aren't in great shape, it’s not unusual to feel pretty gassed by early afternoon, and that’s no condition to be riding a motorcycle as fast as you know how to go. Take a session off, catch a nap, or just relax for a bit and get some food in you to recharge.

Chances are, there will be more than a few riders packing up early from fatigue or broken bikes, and that means more clear track for you in the last session or two of the day. When I first started, and I was a fat, lazy smoker, I used to skip the first session of the day, and the first session after lunch, to be as fresh as I could for the other five.

You’re new to this, and there’s no shame in that. Ask for help and advice from other riders, especially from the control riders. They’ll all be more than happy to share whatever lessons they’ve learned over the years, show you lines or point out something you’re missing. When you do, you’ll shorten the time it takes to go from track newbie to seasoned apex hunter.

Have you been to a track day? Tell us in the comment section below about your first experience and what things you learned, that we might have missed.