How To Get Your Knee Down 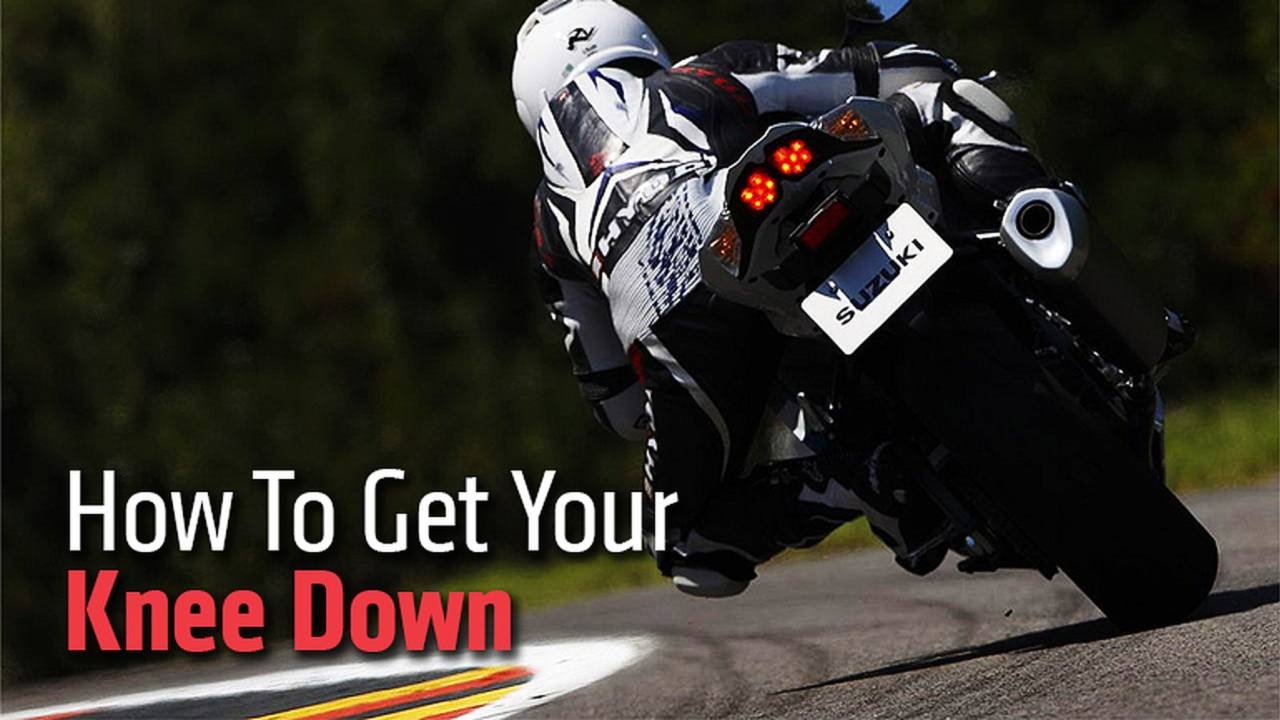 Learn how step-by-step with photos how to get your knee down when riding a motorcycle or sportbike.

If you’re into riding fast, like we are, then there’s no greater sensation than getting your knee down. Like sex, you’ll always remember your first time. Also like sex, it’s probably going to be a lot easier than you think it will be, you just need to get your body position right. Here’s how to get your knee down.

The thing with knee down is that it’s kinda pointless. It won’t make you faster, it won’t make you safer and ignore what you read about in forums — you’ll never catch a lowside on your knee. But, it looks awesome, it feels awesome and your friends will think you’re awesome when they see your scuffed knee pucks. The things you need to do to drag knee can help with speed and safety though. Look at knee down as a sign of proper riding form rather than an end unto itself.

It should also be stated that there’s a lot more to safe, competent, fast riding than dragging a knee. We’ll address other skills another time. For now, let’s just concentrate on this, assuming that you already know how to do things like look through a corner, use your brakes and not run into obstacles.

Step One: Get the right equipment. You’ll need a sport, standard or supermoto type motorcycle with good tires, good suspension and reasonable ground clearance. You’re also going to need, at the very minimum, a two-piece leather suit with knee pucks. Not only are you going to be pushing the limits of your own performance capability — meaning you need to wear safety gear — but the articulation offered by a real riding suit makes all the difference in attaining the proper body position.

Step Two: Find some good corners. If you’ve got the funds and a track close to you, book yourself into a track day. Tracks have ambulances, corner workers to pick you up when you fall and instructors who can help translate this advice into reality. Tracks also don’t have cops.

This is the part where we tell you that riding fast and dragging a knee is illegal, dangerous and just a terrible idea. It’s not big and it’s not clever to ride outside of your ability anywhere, anytime or speed when you’re around other drivers, pedestrians or homes. It can also be a bad idea to do it in the middle of nowhere. Out on some mountain road you might find yourself injured and unable to move to safety or find help in an area without cell phone service. So if you’re going to do this on the road bring a buddy, a tool kit, a tire repair kit, a first aid kit and some water. Know how to use all of the above. Having passenger pegs on your bikes is also a good idea as it can save some serious walking.

An ideal road corner on which to get your knee down for the first time is likely going to be taken in second gear, be smoothly paved, have good vision, plenty of runoff and choose uphill rather than downhill. A nice place to turn around on either side of a series of corners is also a good idea. Watch the yellow lines, car drivers won’t.

Step Three: Work up to pace. Start at a nice easy speed, trying to string corners together smoothly without much in the way of heavy braking or acceleration. Gradually up your speeds, limiting how fast you go on the straights to not much faster than you’re going in corners. The goal here is to work up to a good corner speed and lean angle, not to test your brakes. Your tires and your brain need time to get up to temperature and adapt to reacting at speed. Take it easy, don’t push, just do what feels comfortable. Develop a flow.

Now is a good time to learn from your faster friends too. In racing, this is called getting a tow. Ask them to lead you through the corners at a reasonable pace. Watch what they do, where they are on the road, where they’re braking and where they’re accelerating. You can learn a lot doing this in very little time. Don’t feel pressure to keep up though. If they’re riding too fast for you to comfortably follow, just hang back and ask them to slow down next time. Experienced riders, it’s your responsibility to help your friends.

Step Four: body position. This is where it starts getting technical. Way back in 1983, Keith Code put a chapter about body position in "A Twist of the Wrist." It, along with motorcycle technology, has evolved in the ensuing three decades. The current style — which is designed to work with modern tires, modern suspension and modern motorcycles — is to move once butt cheek off the seat, move your head low and to the inside, stretch your outside arm across the tank and point your inside elbow towards the ground. The main goal is to move your center of gravity as far to the inside of the corner and as low as possible. This means the bike will lean less at a given speed, which in turns means more grip and more safety. Hanging off also allows you to stand the bike up quicker on a corner exit, allowing you to get on the gas earlier. Hanging off means more outright corner speed is possible.

Modern sportbikes are built with this in mind and riding them with the correct form is necessary to fully access their performance potential.

Most guys you see riding on the street sit as far forward as possible with their heels hooked on the pegs and their feet sticking out like a duck. That effectively makes you a dead weight on the bike, harming performance. If you’re talking about getting your knee down, you’re talking about riding a motorcycle as a sport. Start treating it like one by riding your bike athletically.

First, pick your feet up. You want to have the balls of your feet on the tips of the pegs. This will keep your boots off the ground and allow you to put your weight onto the pegs when moving side to side.

Next, scoot back in the seat. Where, exactly, you’ll sit depends on you, your bike and how your suspension is set up. I tend to sit pretty far back because I’m tall.

Continue Reading: How To Get Your Knee Down >>

When most riders fail to get their knee down, they’re doing something like this. A lot is wrong here. I’m way too far off the seat and my torso is twisted upright, moving my center of gravity up and away from the corner. Here’s another angle:

The problem with getting your ass too far off is that it doesn’t really move that much of your weight and it twists your hips away from the corner. Riding twisted like this is bad news.

You could also find yourself leaning your torso and head way into the corner, but still not be getting your knee down. Not as bad as twisting, but still wrong. If this is you, work on pointing your knee out at 90 degrees to the corner and feeling the corner of the seat up your butt crack. You’re probably a lot closer to having perfect body position than a twister.

Here’s something approximating good body position. My crack is resting on the edge of the seat, my torso and head are inside the bike’s center line and roughly parallel with the ground. My pelvis is pointing into the turn.

How you hold up your weight is also important. When you’re hanging off, you should be supporting a lot of your weight through your outside leg, where it’s hooked around the tank. As you start pulling real G’s in a corner and leaning way over, the cornering forces are pressing you into the seat, so this isn’t as hard as it sounds. This will leave your arms free to steer and your inside leg free to move as it hits the ground.

Shifting between appropriate body positions on straights and in corners is also important. As you approach a corner, go ahead and get off to one side as you begin to brake, that way you’ll be getting the entire bike, including the rider, prepared for the turn. Move around the bike by placing your weight on the pegs through the balls of your feet. Your arms are busy steering and opening the throttle, clutch and brake and hopping around with your weight on the seat will upset the suspension.

So, the first time you get your knee down, it’s going to go something like this. Approaching a corner, gradually squeeze the brake lever as you put your weight into the pegs and slide one butt cheek to the inside. Swivel your inside knee to point as close to 90 degrees out as possible. Move your torso and head down and to the inside, “kissing” the mirror. Feel your outside arm contact the tank and point your inside elbow at the ground. As the speed at which you’re taking corners increases, you’ll naturally drag your knee in this position. As you begin to exit the corner, push the bike upright as your torso moves further off, rolling on the throttle. If the next corner is the same direction, stay where you are. If it’s the opposite, move across the bike and start this all over again. Congratulations, you now deserve the bike you’re riding.