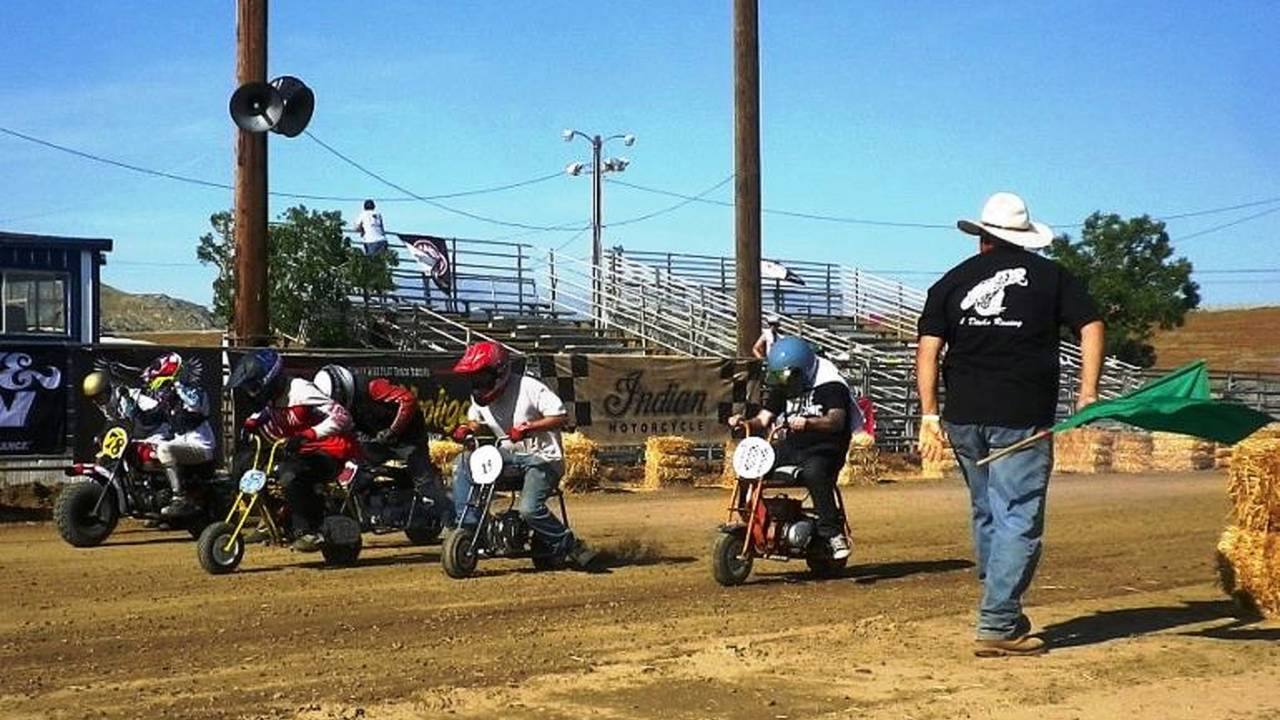 We've got a pull-start mini bike that seems to be indestructible. But damn it, we're going to try.

If you have been following along, last year Monster Moto gave me a 80cc pull start mini bike with which to do whatever I wanted. Of course, what I want to do with almost anything is to see how fast it will go. Cue the Orange County, California,-based Hell on Wheels club, which has events that allow me to do just that.

We began in January with mini bike flat track racing. The bike has proven hard to kill, perfectly predicable at full speed, but painfully slow against bikes powered by the Harbor Freight Predator 6.5hp motor. We were further hampered by the low budget centrifugal clutch that locks up much too early in the rev range. However, I geared it down with a bigger rear sprocket, so it could accelerate better, cut half the blades off the cooling fan, bypassed the governor, and added a straight pipe exhaust – all of which increased the top speed to a mind-ripping speed of almost 30 mph.

OK, that doesn't sound like much, but that is an increase of about 30 percent!

March 19th was a clear, sunny Sunday, and Meatball and crew had carved out a rolling natural terrain track out of a seldom-used portion of the Lake Elsinore Motocross Park (located in the "Inland Empire" region of Southern California). Of course, Elsinore is famous for an off-road race that has happened on and off since the 1960s, as seen in the movie On Any Sunday, but this is the dedicated track outside of town. The biggest obstacle to racing the little Monster Moto 80? A small hill that it had neither the power nor the momentum to get to surmount.

Lap after lap, Rob (my development/test rider) would have to hop off the bike and run it the last few feet to the top, then motor out. Luckily, he is in good shape and the weather wasn't yet as hot as summer can get in these parts. The only other bike really racing in the pull start class had us way outclassed again.

But amazingly enough, the racers Rob found himself dicing with on the track were novices on much more powerful bikes who had little dirt experience. He raced a woman on a 150cc Honda for four laps, only to have her finally leave him behind at the very end. Which just goes to show it isn't the size of the dog in the fight, but the size of the fight in the dog.

Not surprisingly, we finished the day second out of two in the pull start mini class.

April 22nd brought us to the flat track event held in conjunction with Roland Sands' Super Hooligans and the Hippy Killer Hoedown chopper/hot rod show and music event. This event started about 10 years ago as a small anti-Coachella in some guy's back yard, and has grown to be a pretty big deal. The event was held in Perris, California (also located in the Inland Empire region), on the fairgrounds outside the big half-mile Perris Auto Speedway. Our track was a dusty oval, a little less than 1/4 mile long, set up in what I think was a rodeo arena.

This being a more well-promoted event than Hell on Wheels' Lake Elsinore shindig, there was a much bigger field of pull-start mini bikes to race against, maybe as many as 10. One of the great things about the M80 is that – slow as it is – you're guaranteed to beat about a third of the home-built bikes just because it doesn't break.

There were some frighteningly fast mini bikes here, several of which were able to wheelie out of corners! But one of the worst injuries of the day, even including the hooligans on hardtail V-twins, was a mini bike rider running a alcohol-burning ex-race go kart motor. He got spit off his bike and high sided. Rob was able to outride and outlast much of the field to finish both the heat and the main race about mid pack.

Coming up on 8 June, at a top-secret location (Long Beach, California) is the Intergalactic Cool Runnings Mini GP Championship of the World will take place on a parking lot road course. We will be there, once again wringing out the M80, but if you happen to live in the area and want to join us you'll have to figure out the exact location... or email me for more info.