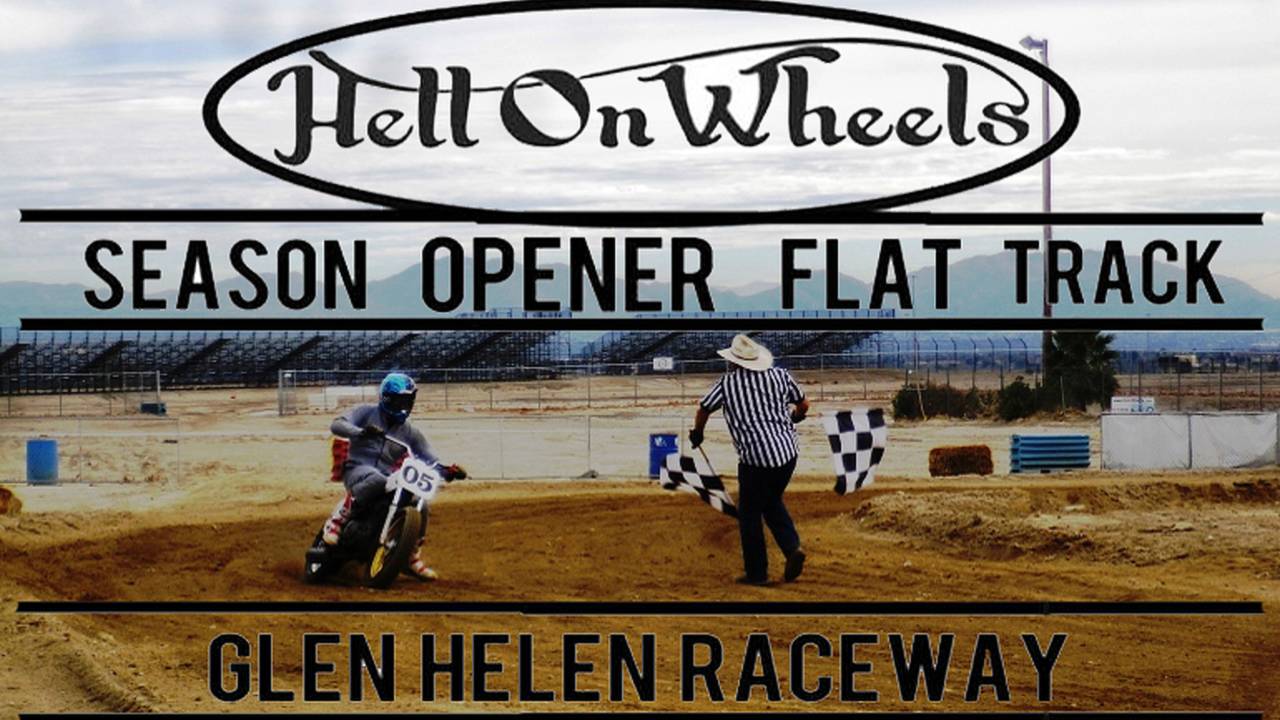 As is often the case, those who can do, and those who can't, often take pictures and report back on events, or maybe not. Anyway, I went to this event to race, and so only got a few pictures, but I wanted to share the story anyway. The guys from Hell on Wheels MC, and Glen Helen Raceway carved out a perfect new track of about an 1/8th mile for the Hell on Wheels dirt track race. Along for the adventure were the XL75 that belongs to my nephew, the Monster Moto 80cc pull start mini, and RideApart's old friend Jesse Kiser.

I had planned to race the little Honda dirt bike in the adult mini bike class, and the pull start mini in the class just for those, but as is often the case with Hell on Wheels, things didn't go exactly as planned. It was decided to put all the adults in one race, no matter what size mini they were on (100 or 150cc, pull start or real bike) and all the kids on minis in the other, which meant I would have to ride two bikes in one race. My friend Rob is always game when there is a race on, so he decided to suit up in my sweaty old helmet, over sized off-road pads, and five size too big boots and race the pull start bike.

The extent of my race prep on the little pull start bike had been to cut off the kickstand mounting tab, and mount up some number plates. Its 2.5hp, centrifugal clutch, governor-equipped motor would have been outclassed by most other Predator 212cc mini bikes that show up, let alone real dirt bikes.

Meatball, the race organizer, had told us to line-up in the second row because our bikes were so outclassed, but the starter was having none of that. He lined us all up together, with Rob right in the heard of all those real bikes. When the green flag was waved, he got a good run and jumped into the saddle to get the Monster Moto up to speed. But was still in last place by the first corner. The first corner was exactly 25 yards from the starting line. I hung back and raced with Rob, trying to practice my recently aquired American Supercamp riding technique.

At least I tried to hang back. When the pack came around us at the end of the second lap I wicked it up and gave chase. In the heat of a race I actually found what I had learned from the AMA pros really helpful, and was able to lap this course on the XL75 flat out in 3rd gear. Of course, the other tricked out bikes still had twice the power, so they pulled further away on every straightaway. It was still fun though.

Rob claims he was right behind me the whole time, but I seriously doubt that. He did manage to keep the little Monster Moto 80 on the same lap (at least one down) as me on the little Honda, so that is not too bad. He reports the chassis and tires are very predictable, and his only issues were getting up to speed and keeping it in the power. I don't think it is possible, but it looks like he had even more fun than I did.

Jesse Kiser was racing the Honda XL350 flat tracker that he bought off some East Side hipster who had no idea what it was. We don't know anything about the history of the bike, but it appears to have been a race bike for a long time. He hasn't had too much time to dial it in, but he did fit some Harley-Davidson Sportster shocks to the back of it, which should give it more flat track cred (plus the ones it came with were junk).

He made a much more respectable showing than Rob or I did, that's for sure. Although, he did manage to run himself over with his own bike at one point. He was in two classes, and he manged to get a trophy in one of them, despite not really having put any time or development into the bike.

Rob also managed to get a trophy, as the top finishing adult on a pull start mini bike. Our fingers are crossed that we can drum up a few more lawnmower powered mini bikes to compete in future events, comin up later this year. These bikes are a blast, even if they are simple and slow.

The next Hell on Wheels MC event is a Stadium Steeplechase on February 26th at Glen Helen (schedule is here) , but I seriously worry about this pull start mini getting up the hills involved with an adult on it. I have geared it up from 75 teeth to 80, and may add a performance exhaust and remove the governor, but I doubt all that will gain us much more power. But you better believe we will give it a hell of as try!