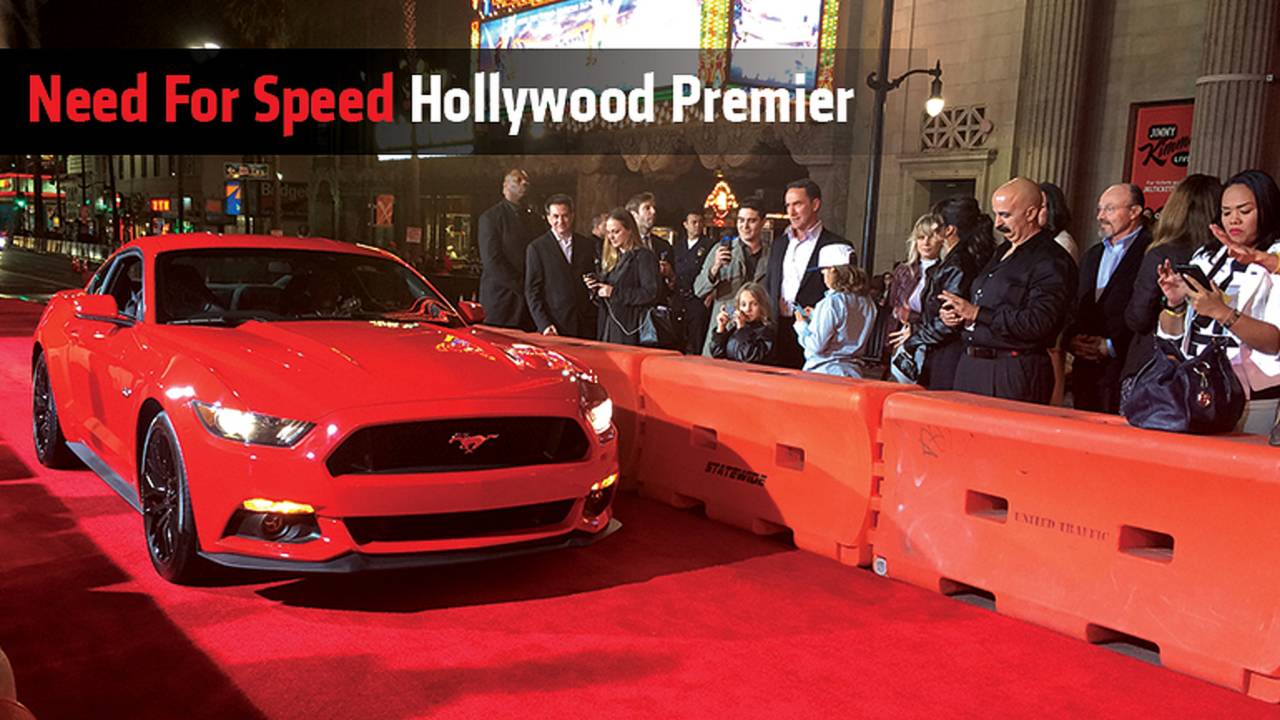 Need For Speed the movie closed down Hollywood to kick off its premier in true automotive fashion. Ford, Disney and EA Sports brought the hero cars to arrive in style.

Amidst a picturesque California sunset, the lights began to illuminate the world famous street just in front of the TCL Chinese Theater in Hollywood. DriveApart was there to take in the spectacle of the latest automotive themed action film, Need For Speed, starring Aaron Paul (Pinkman from Breaking Bad).

Considering this is Hollywood and nothing ever runs on time, in this case about 45-minutes, the festivities kicked off with a parade of the movie’s hero cars driven by the stars themselves. They included our main hero car, the Ford Shelby GT500 Mustang piloted by our villain, Dominic Cooper. Followed by Aaron Paul and his wife in a 1969 Ford Torino (which was showing signs of overheating). Caught in the middle was Rami Malek and Ramon Rodriguez in a heavily modified F-450 and rounding off the Ford parade was Kid Cudi in the 2015 Ford Mustang 5.0L. We quickly forgot we were running behind at that point.

Car centric movies have a pretty high bar to leap if they really want to make an impact on people who aren’t obsessed with them – yes, shockingly these people do exist. Need For Speed is no different. The formula is simple; acquire some relatively cult famous celebrities, put them into ridiculously expensive cars and film it on camera equipment and rigs so expensive that their budget alone could solve the unemployment crisis.

While the plot is more than predictable and a little fractured, it does solve some issues that are repeat offenders in automotive focused movies. They used real cars, real drivers and real cameras to capture 99% of all the drive and crash sequences. Which is a tall order for any movie with just a single car sequence in it.

Your first introduction to the high-octane fueled world of Need For Speed is situated in a small town in Upstate New York in the form of a post-modern American Graffiti drive-in. For some reason men, women and children all own high-horsepower muscle cars that are capable of intense drag racing and drift performances. Not that we are complaining about the driving itself, executed by drifting guru Samuel Hübinette and a slew of Hollywood stunt talent, but this utopian world of muscle cars was a bit strange. A cameo race appearance by a Porsche 944, we hope is at the very least a turbo or an LS1 swap, also added a little confusion to this small town automotive prowess.

As we leave the small town after a small stint in jail for a wrongful and unfortunate street-racing incident we jump into a cross country 45-hour race to make it to the DeLeon – a secret playboy race organization along the California Coast. Embarking on this road trip we noticed not one character eats or sleeps and drifting through small towns to avoid traffic is a normal commute. Kid Cudi’s character plays an ever versatile pilot who is the team’s eye in the sky to offer real time traffic reports with a side of comedy. Something Garmin and Goolge Maps should take into consideration.

What really makes the movie is the moments where the cars revving to high hell racing across the country just makes your smile. Its wonderful to see real burnouts, real jumps (well mostly real) and exotic cars most of us hunt on YouTube for hours just to hear a good sound clip of. They are simply in your face, flipping and trading paint in some of the most picturesque locations across America.

If you want to watch a car movie this Spring and trudge through a common plot, Need For Speed is exactly what you are looking for. It really is a great movie to see kick ass cars, both old and new killing tires gratuitously, but that’s the only reason to see it – although Imogen Poots did put on the best performance of the film.