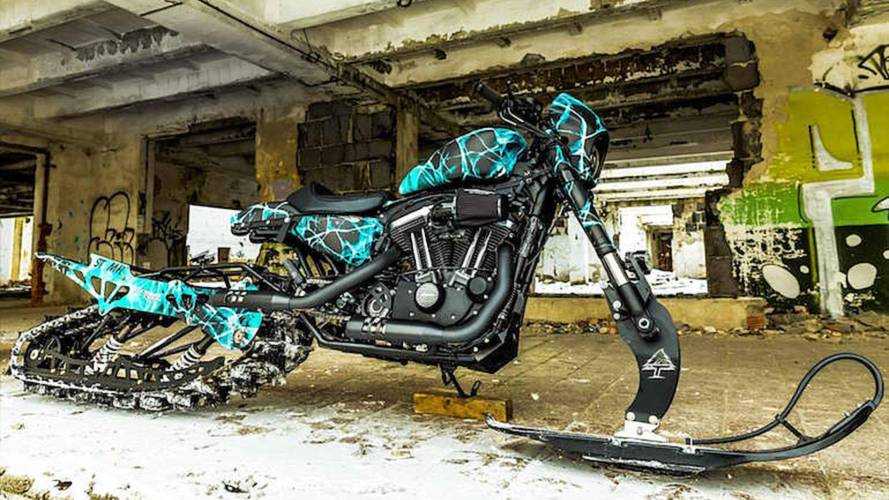 Harley-Davidson of Banska Bystrica churns out the ultimate winter project for the third annual Battle of the Kings Contest.

Harley-Davidson's 2017 Battle of the Kings custom bike competition was full of amazing entries. Roughly 200 H-D dealerships from around the world built Sportster-based customs this year with an eye on taking home the big prize – and bragging rights – from EICMA 2017. One of the more unique bikes entered isn’t really a bike at all, but a drift-chewing, ice racing snow machine built by Harley-Davidson of Banska Bystrica.

Banska Bystrica is an old copper mining town located on the banks of the Hron River in Central Slovakia. Primarily a tourist spot now, the picturesque city gets a fair amount of snow due to its proximity to the Low Tatra, Veľká Fatra, and Kremnica Mountains. It makes a certain amount of sense then that the crew at H-DBB built a snow bike for the competition rather than a road-going bike.

To make their radical custom, the H-DBB crew started by stripping down a donor XL 1200 CX. The front wheel and rear swingarm were then removed and tossed into the corner to make room for the snowmobile parts. A single ski conversion was mounted to the forks, and the rear skid-frame system was installed with its own suspension. Since the Roadster's drive belt is on the right side, a conversion was done to move said belt to the left side to accommodate the snowbelt kit. The snowbelt came with its own brakes, so the Roadster's stock brakes – including the ABS – were eighty-sixed to make room.

After the mechanical bits were sorted, the crew moved on to the cosmetic work. A new “blue smoke” vinyl wrap was made to cover the tank, forks, side-panels, headlight cowl, tail, and part of the snowbelt kit. A secondary LED light was mounted beneath the aftermarket headlight, and a new intake and skid plate were added.

Once that was done, all there was left to do was take their new snowbike out for a rip on some ski slopes. You can check out one of their videos below, and it's definitely worth your while.