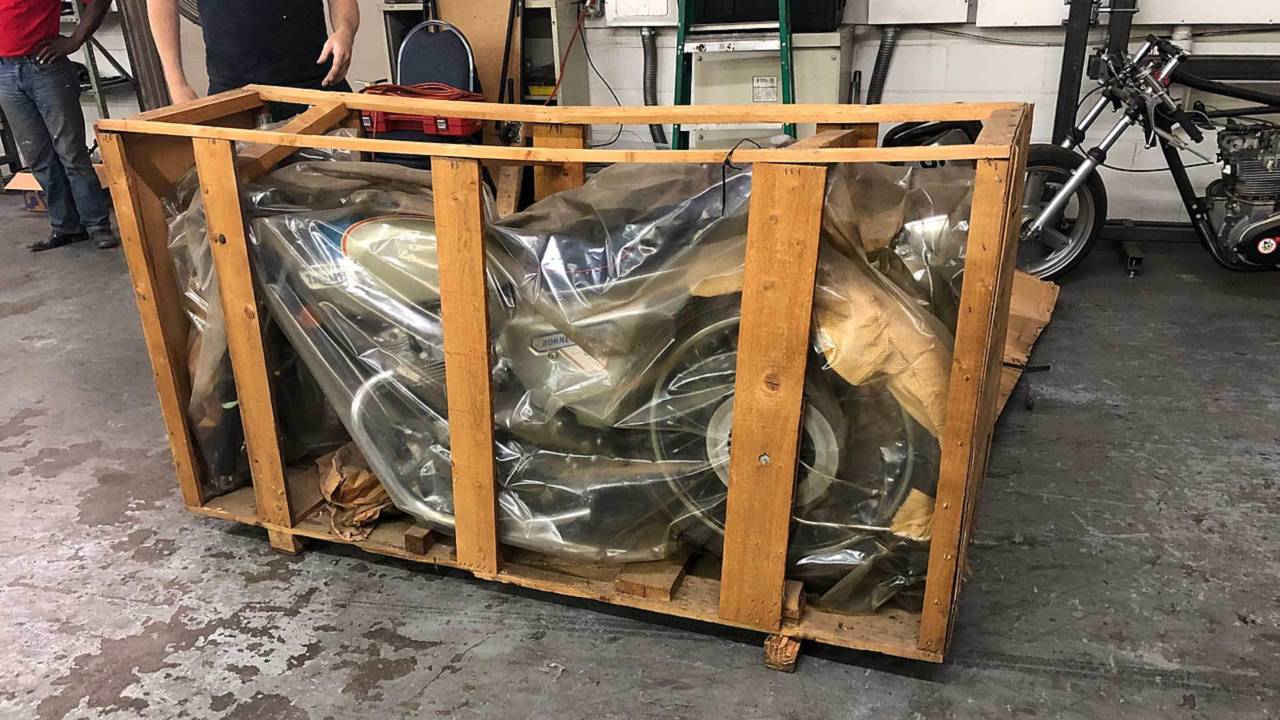 About a million years ago, a guy down in Florida discovered at least one (maybe two or three, my memory is pretty rusty), still crated Yamaha XS850 Triples in the back of a recently closed Yamaha dealership. Still wrapped in plastic, waiting all those years for assembly and sale, they were both a time capsule and a treasure trove. The one I remember the most was the same burgundy color that my own XS850 was, and I was in love. That one went for around $10,000 (in early-aughts money) on eBay, and the membership of the Yamaha Triples Owners Group let out a collective sigh. None of us were going to spring for the lost bikes, but we were glad they were going to good homes. So, why do I bring this up? Because some guy just recently discovered something even better than the Florida Triples in Ohio—a still crated 1977 Triumph Bonneville Silver Jubilee.

On the evening of June 21, 2018, Reddit user Twincky posted a thread on R/Motorcycles with the title "Unboxing a 1977 Bonneville 750. Untouched for over 40 Years". Inside was a photo of an old Bonnie, still wrapped in plastic and packed in the crate in which it arrived in the States from Coventry all those years ago. The Reddit thread led to an Imgur thread that Twincky had posted the week before, a thread packed with amazing photos of this British time capsule.

The first time its seen daylight since it was crated in Coventry.

So, what's the story here? Well, we're not entirely sure. Info on the bike and the circumstances of its discovery is pretty lacking so far. Twincky states that the bike sat in its crate in a bike shop somewhere in Ohio all these years. A man named Gerlad Pacholke donated the bike to a childrens home in West Virginia called Chestnut Mountain Ranch. From there, CMR sold the bike on eBay to raise money for its charity. That's apparently where our man Twincky comes in. He paid around $20,000 for the bike, and the rest is (recent) history.

That's all I know so far, friends. Aside from the little bits of info and these pictures, there's not much to go on. I reached out to Twincky to find out more, so when (if) he gets back to me I'll update this story with everything I can find out. Until then, let's just bask in the glow of these pictures and be super jealous.

Just look at it. It's amazing.