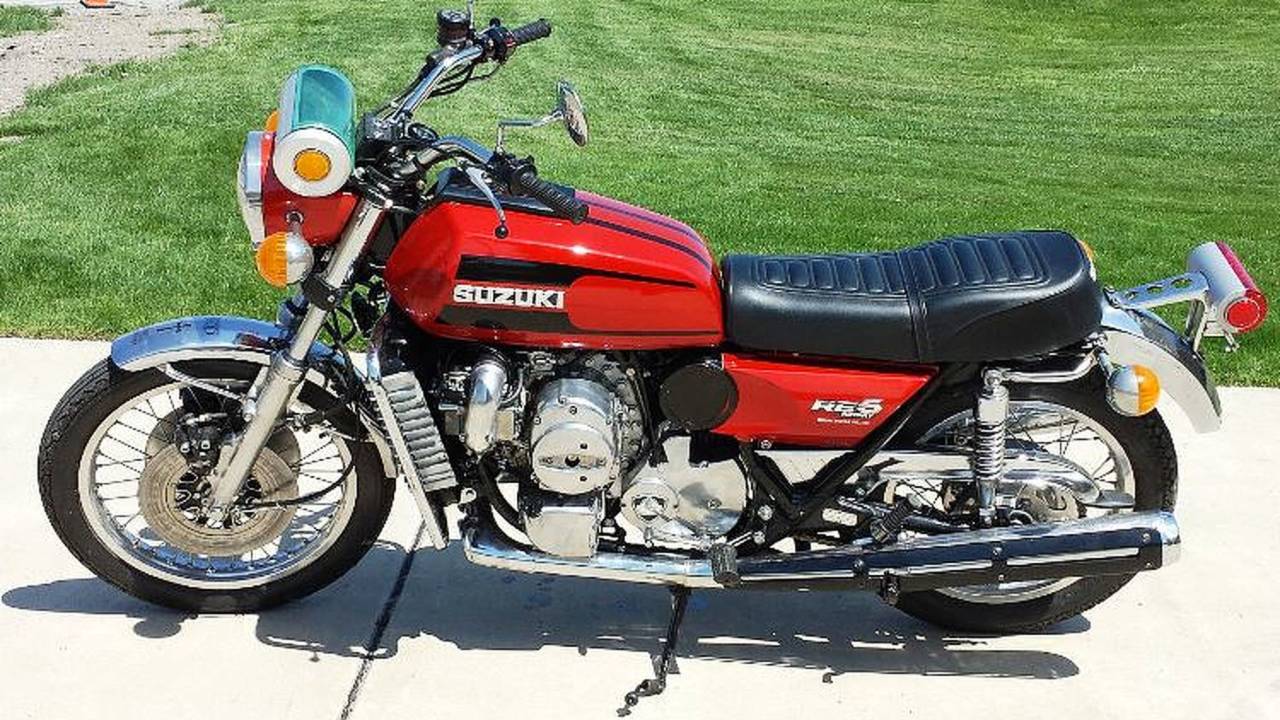 I swear, I am not combing eBay looking for evolutionary dead ends on the motorcycle family tree, but just like the 80s turbo bikes from a few weeks ago, that is exactly what this is. This week's find is a clean, low mileage example of the rare 1975 Suzuki RE5 - the Wankel rotary engined bike.

On paper, the rotary engine looks like the perfect combination of two-stroke power and simplicity with four-stroke levels of refinement and reliability, but somehow what works in theory never seems to pan out in the real world. Suzuki was all in on this one, with countless millions of Yen, 10 years of research and development, numerous newly invented machine tools, and several patented new manufacturing methods poured into this bike. In the end, they got a 500cc motorcycle that made 62hp and weighed over 500lbs. For reference that is two more horses than Kawasaki claimed for the H1 500cc two-stroke triple, which was 100lbs lighter.

With this bike though, Suzuki enters an elite company of rotary builders. Mazda of course has been the most successful, and there are actually a few custom motorcycles that have been built with their motors. NSU was the originator of the engine, but stop building cars with it and never really got it working satisfactorily. The German Hercules W-2000 was a small displacement rotary motorcycle that beat Suzuki to market by a year, and went on to provide the basis of the twin rotor Norton that would become the most successful application of the Wankel in motorcycling.

This example of the Suzuki RE5 is said to be a low mileage barn find, and it really looks it. Fewer than 6,000 of these bikes are thought to have been made, and many of the early ones (which this is) were retrofitted at dealers to be more conventional looking after they didn't sell. The eBay seller does not include a good picture of the much hated tin can instrument cluster, so you can't see the mileage—or how neat it is—but here it is in an original factory ad.

When you turned on the ignition key, the green tinted plastic cover would rotate open automatically so you can see the speedo and tach. You can click over to this YouTube video and see it, and also hear how unique these bikes sound on the road. They weren't kidding about it being smooth as glass either—there are no reciprocating parts in a rotary.

This clean example is listed with a starting bid of $9,500 or buy it now for $12k, which may be a bit much even for one with so few miles. On the other hand, these hardly ever come up for sale and almost never in this condition. Only four have been on eBay in the past 90 days. The last few clean ones to sell on eBay were the later version, and both sold for $3,500 each.

Here's what the seller has to say: "Beautiful, totally restored, very rare barn find Suzuki Re5. The bike is in perfect running condition and all original except for the tires and battery. In the photos there is an emblem on the left side of the bike that is not in place, but has since been installed. The bike is all original. I am the second owner and it has 5233 Original miles. Please feel free to ask questions if you have any and I will be sure to answer."

This will certainly get a ton of watchers, and we shall see what the market will bear. You can watch it or bid here.