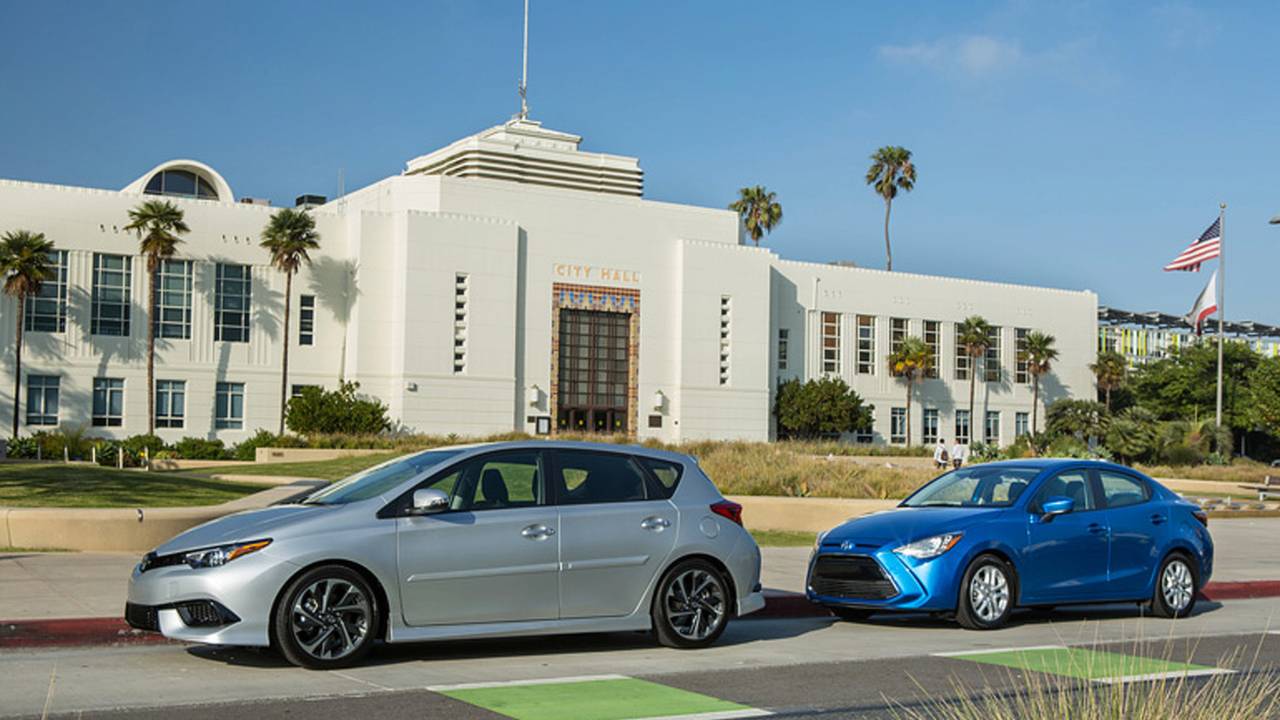 The F250 driver we just passed looks up in ghastly confusion. It's understandable, really. It's not often that a Scion hatchback is seen attacking the apex of a corner like a tarmac rally car.

The driver makes an attempt to catch up. We continue onward, rowing through the 6-speed gearbox, going as fast as the speed limits allow. We're behind schedule—lunch is in 20 minutes and we're hungry. The brakes are responsive as we enter the next twisty. The acceleration is smooth. Our Scion iM drive was necessarily quick... and revealing.

There are two different expectations and standards to keep in mind. One, the iM is a hatchback based on the TC chassis– and no it’s not a new Matrix. Two, the iA is the first iteration of the Mazda 2 in four-door Scion form. (For those who don’t know, Mazda and Scion collaborated on the iA.)

“The Mazda 2… err, iA looks a little different doesn’t it?”

Initially yes, but it looks a lot better in person. Now I didn’t exactly say it looked really good and I’m not saying it looks bad... but it’s not as bad as you think.Yes, it does look like a rebadged Mazda and yes, it looks a little silly (you know, in the silly but cool way)... but you’ll be ok with that. It’s part of the experience you’re barely paying anything for. It’s unique and everyone loves Mazda 2’s—even in sedan form.

The iM on the other hand, looks beefed up, sharp and menacing. Standard HID projector lights, some honestly attractive wheels, well laid body lines, and sleek taillights make this model out to be the better looking of the two cars. It’d look even better if Rocket Bunny (hype train, sure, but RB is awesome) made a body kit for it.

The 100 hp 1.8 liter could use a power bump, but it doesn't take away too much from the overall package. In fact, you don't notice the lack of power with a bit of spirited driving in the iM hatch. Outfitted with nonstandard TRD lowering springs and sway bar, it was a thrill to whip around. Road feel was connected and comfortable. Cabin noise wasn’t luxury car quality, but it was still impressive nonetheless—I could hold whispered conversations.

Even with the absence of the lowering springs, the iA was surprisingly neutral in handling. It’s pretty obvious that this car isn’t made for the track, but that’s not to say it handles like a pig (‘cause it doesn’t). It’s perfect for daily driving. Road noise, however, could be improved upon, as the only way to hear your driving partner was to raise your voice a bit.

Scion allows buyers the option to have a 7-speed CVT automatic or a 6-speed manual for iM and 6-speed manual or 6-speed auto for the iA. The maunal versions are well executed. Both the iM and iA’s adaptations were smooth and well geared. The iM, however, had a high clutch engagement point that could prove difficult for new drivers. Although, the sad lack of people looking to get into manuals would void this negative anyway.

Both cars boast standard options out the wazoo like Rear Back up cam, premium quality interior trim, sport wheels, body kit, etc etc. The interiors in these cars are robust and of higher quality than most competitor models. Interior trim in the iM was simple—almost minimal—and sported a user friendly Pioneer head unit that would put competitors’ to shame. The iA came with a Mazda grafted head unit that featured navigation ($900 SD card upgrade option). Also, no XM here people, just AUX and USB connections, ideal for the millennials avoiding another subscription fee. I mean, who needs XM when hot-fire soundcloud songs are available for free? Scion’s new and sharp color info-cluster (both cars) topped the long list of features off.

While both interiors were impressive, the iA’s dash design was a let down; the floating head unit just made what otherwise would’ve been a great interior, feel cheap. Not to mention, the functionality was a little wonky.

It’s important to mention that these features, some even being new for this segment, are standard to fully appreciate this review. Really, for the price of $18,460 and $15,700 for the iM and iA, respectively, it’s hard to not to like these cars even with the lack of power and other mentioned cons. Comparing them to competitors in the segment compel this argument even further. If you're in the market for a sporty hot hatch or a small sedan, the Scion iA and iM will surely catch your eye and the sentiment of your wallet.