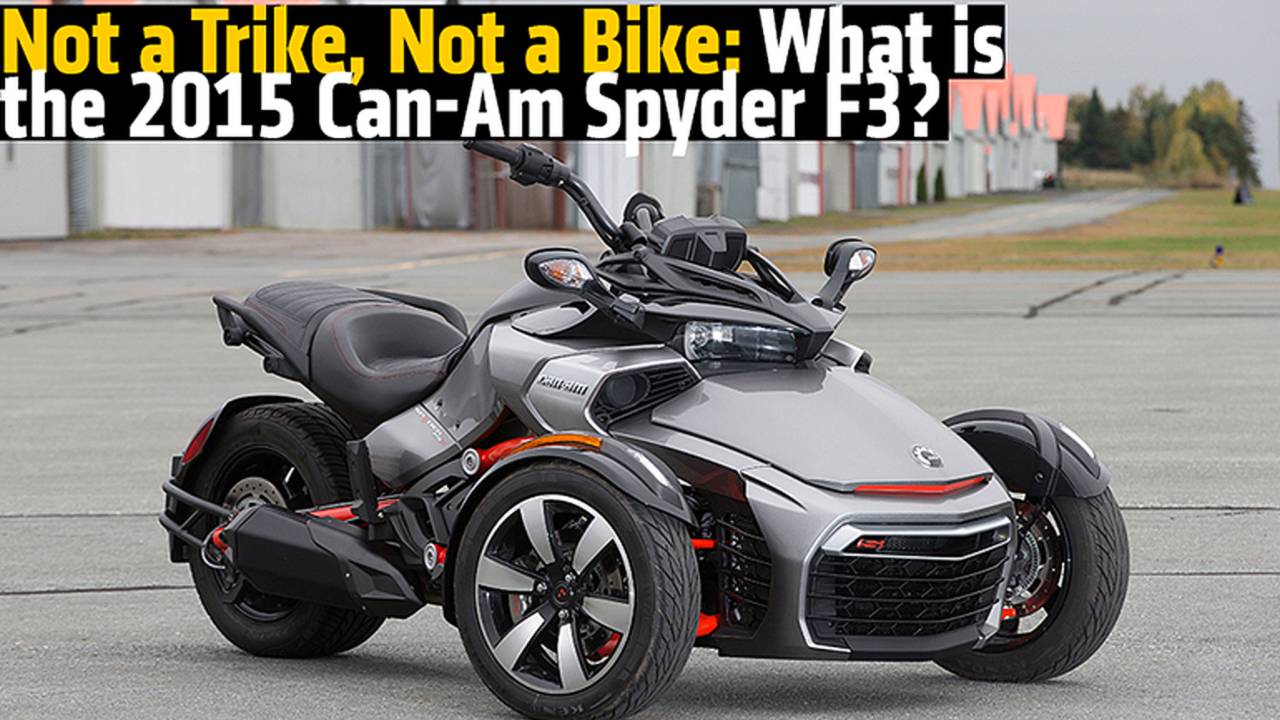 Not a Trike, Not a Bike: What is the 2015 Can-Am Spyder F3?From a language standpoint, it does not fall under the “bike” heading since bi equals two....

From a language standpoint, it does not fall under the “bike” heading since bi equals two. State law varies but in CA, an M1 endorsement is not required to ride a Can-Am Spyder. So past tire-roasting fun, what is it? Since 2008, there have been heated motorcyclist debates on where the Spyder lies – let us know what you think in the comments below. After recently hard riding the 2015 Can-Am Spyder F3 for two full days in the Canadian backcountry, it is clear this is an entirely different animal.

Getting bogged down in argument about designation of this vehicle is beside the point. What matters is how it makes you feel, and there wasn’t a motorcyclist journo on the press launch that wasn’t smiling while riding. The 2015 Can-Am Spyder F3 hits 0-60 mph in 4.8 seconds and corners like a high-tech snowmobile or quad. It is sporty and breaks all your assumptions about what riding a three-wheel vehicle means.

READ MORE: 14 Most Important Motorcycle Developments of the Century

For a motorcyclist, it is another tool in the shed, not to replace your shiny sportbike but to offer a different experience of occasional fun. For a never-before rider, it offers a sporty open-air experience and taste of what two-wheels is like. Then there are those injured or paralyzed that can use a Can-Am Spyder to stay riding. With a base MSRP of $19,499, the Spyder F3 isn’t cheap but I feel it justified for what you’re getting.

READ MORE: Why Wearing Jeans on a Motorcycle is a Really Bad Idea

The 2015 Can-Am Spyder F3 is about head-in-the-wind adventure, not stop and go traffic. This latest offering is ripe with stability tech and improvements including a 160 lb weight savings over the current RT model. The Can-Am Spyder F3 locates the rider lower and further back, moving the pegs forward and redirecting force exerted on the rider’s arms during cornering to the legs. Additionally, BRP’s proprietary “U-Fit System” allows the rider to choose between five different footpeg positions and four different handle bar option

For power, the 2015 Can-Am Spyder F3 received an all-new Rotax 1,330cc 3-cylinder engine with manual 6-speed transmission or semi-automatic SE transmission. Total power is claimed at 115hp and 96 ft-lb of torque. Holding the big-bore triple wide open, thumbing through the gears to 160 km/h (99 mph) when crossing the braking markers then jumping on the powerful Brembo ABS braking system was an experience FAR gnarlier than expected. Anticipate 250 miles on a single tank of fuel and nearly 10,000 miles between oil changes.

Bottom line is BRP’s Can-Am Spyder in general is smooth fun, especially the latest 2015 Spyder F3-S. It only takes 5 minutes in the saddle to shatter any preconceived notions. Are those who’ve only ridden a Spyder considered motorcyclists? That is up for debate. What is clear is this three-wheel vehicle is another weapon in open-air adventure. It’s its own animal and owns its space in the industry. How can you argue with a performance-minded vehicle that gets you grinning ear-to-ear under throttle?