14 Most Important Motorcycle Developments of the Century 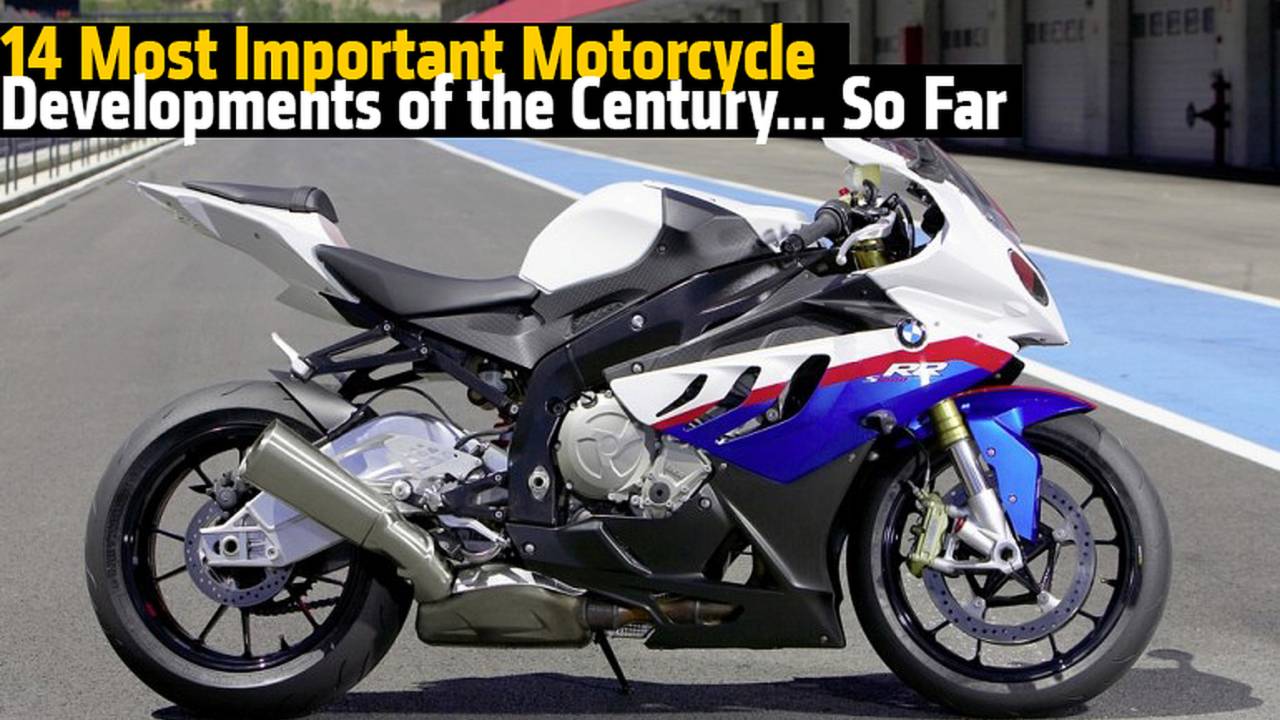 Fourteen years into the present century, what have been the most significant motorcycle developments?

Whether or not the impending debut of the Kawasaki Ninja H2 (we're talking about the street version, the H2-R has already been unveiled) will live up to the hype, it's refreshing to see a manufacturer pushing the envelope. While things have plateaued recently in terms of innovation, the first 14 years of this century have seen some incredible leaps forward in motorcycle technology, bringing comfort, performance and safety to levels never before dreamed. Here, in no particular order, are the things that would have blown our minds, if you had told us about them in 1999:

It's true that Kawasaki debuted fuel injected motorcycles back in the early 1980s, but EFI didn't reach maturity and almost universal adoption by the industry until the early 2000s. Today's fuel systems use multiple banks of injectors, sophisticated digital controls and engine mapping, switchable fuel maps and ride-by-wire throttles to deliver consistent, efficient, reliable power from the instant you thumb the starter.

While there is some nostalgia attached to the days when you had to choke and warm up your motorcycle, anyone who has dealt with a temperamental set of carburetors on a cold morning will tell you they don't miss those days in the least.

When will we see Direct Injection on motorcycles? Only some companies, like Motus Motorcycles, who experiment with DI engines, have toyed with the idea. The current restriction is fuel injector technology, as most DI injectors can't withstand high-rpm operation.

The original R6 may have entered production in 1998 and instantly shattered the industry's perceptions of what a middleweight bike should be, but it's the development of the line after the turn of the century that underlines its importance for this list.

It was the first 600 to break the 100 hp mark, bone stock, a mark which was considered healthy for a 1000cc machine only a few years earlier. For better or worse, it was the bike that abandoned any precepts of being a street bike first and a race bike second.

Each of the major evolutions of the R6 raised the bar by which 600cc sportbikes would be judged, outclassing the rest of the Big 4 for nearly a decade. Yamaha invested some of its shiniest new bits of technology in the R6, including ride-by-wire throttle, a stock slipper clutch, and variable length intake stacks.

Until 2008, BMW had been mostly a producer of quirky, heavy touring and adventure rigs aimed at well-to-do old men, and teams wanting to race the Dakar Rally. They had toyed with more sporty variations on that theme, in the form of the R1100S (of Boxer Cup fame) and the K1200S, but hadn't produced anything that could seriously compete with the fire-breathers Japan was turning out.

All that changed with the debut of the S1000RR, a 193 hp missile aimed straight at the top of the superbike class. It retained some of BMW's "only a mother could love" styling, but the bike itself was nothing short of astonishing, in terms of both technology and performance.

If we were going to order this list, this bike would probably be at the top. When Michael Czysz' dreams of an American-made MotoGP machine were dashed by the switch to 800cc powerplants, he decided to build something even more radical than the stillborn C1. The MotoCzysz E1PC wasn't the first electric racing motorcycle, but it was the first one that looked more like science fiction than a science project. With American journeyman racer Mark Miller aboard, it won the 2010 TT Zero race at the Isle of Man TT, and repeated the feat for the next two years with Miller and Michael Rutter. Rutter "broke the ton" at the TT in 2012, recording a lap at an average speed of 104 mph. The E1PC is the bike that legitimized the idea that electric bikes could look cool, go fast, and someday compete with internal combustion machines. It made the major manufacturers sit up and take notice, which may be what changes the motorcycle landscape more than anything else as the century moves on.

In the '90s, you had two choices when it came to tires for your motorcycle. You could buy tires that were grippy, but lasted about two weeks, or tires that would get you through the summer, but were hard as rocks.

Michelin helped change all that with the introduction of their 2CT series of tires. They took their already wildly successful Pilot Power sport tire and added a softer compound on the sides, a direct result of their experience building tires for MotoGP. Other manufacturers followed suit, and now dual-compound tires can be found in sport, touring and even offroad tires.

Like the S1000RR, Aprilia's RSV4 was the bike that brought legitimacy back to the Italian brand's racing pedigree. Aprilia had been building beautiful, if underpowered and painfully expensive motorcycles. They hadn't enjoyed broad success on the race track since the demise of the two-strokes.The RSV4 changed all that (except the expensive part), winning the World Superbike title in 2010 with Max Biaggi, in only its second season of competition.

The other brands were left to moan that the Aprilia was a thinly-veiled MotoGP machine, which may have been true, but it was also beautiful, fast, and a much-needed boost to a manufacturer that was previously without direction.

First, the argument was that four-stroke dirtbikes were only toys. Then it was that they could only be successful with larger displacements, they'd be too heavy, and that you couldn't rev them very high. Then Yamaha threw down the YZ250F, and jaws hit the floor so hard that the 125cc two-stroke became irrelevant almost overnight.

The little thumper would rev to a stratospheric 14,000 rpm, didn't weigh much more than a 125, and made gobs of torque everywhere. While the early models were still a giant pain to restart, the motocross landscape would never be the same after the YZF's debut.

The safety of a crashed rider on a racetrack is mostly an exercise in energy dissipation. While the obvious answer to riders smashing themselves into walls and tire barriers is to move the walls, sometimes that's impractical or impossible. Sand traps can help if they're groomed properly, but with bikes becoming more powerful and corner speeds increasing, a better, less expensive solution than redesigning tracks every season was needed. Enter the Airfence.

These inflatable barriers started appearing at tracks around the world in the early 2000s, and today have become ubiquitous at races from MotoGP to the local club scene. A racer hitting an unprotected wall is almost unheard of today, and thankfully, so are the heinous injuries that used to accompany such impacts.

When a brand so steeped in image and tradition as Harley-Davidson creates something outside its tried-and-true formula, it's bound to turn heads, and not always in a good way. But when HD rolled out the V-Rod in 2001, it was clear they'd done it right.

The VRSC was long, low, and brash. Its Revolution powerplant was water-cooled and fuel-injected, and actually capable of making good power. In drag race form, the bike was legitimately fast. It wasn't horribly expensive. In short, it was unlike almost anything that Harley had been building for the last several decades, and it gave The Motor Company an air of relevance that it desperately needed to position itself competitively with a new generation of riders.

When it was announced that MotoGP would begin allowing 990cc four-strokes beginning with the 2002 season, there was much weeping and gnashing of teeth from the Grand Prix racing faithful. The two strokes had soul, they cried, and were such exquisite pieces of machinery. But when the RC211V arrived on the scene, almost everyone quickly forgot their qualms.

The Honda was blindingly fast, skull-shatteringly loud, and in the early days of engine electronics, was a wild machine to ride. Valentino Rossi blew everyone away aboard an RCV in 2002, torching the rest of the field for 11 wins out of 16 starts, and winning the championship by 140 points. By the following season, Honda had poured on an additional 40 (!!) horsepower, and without Rossi's defection to Yamaha in 2004, would likely have dominated the remainder of the 990 era.

Riding gear has progressed in every way over the last fourteen years. Advanced materials, better construction techniques, lighter weight and better venting are available across the board, even from entry-level brands. But perhaps the most important development has been in the introduction of armor materials and techniques to prevent bone, spine and joint injuries when things go sideways.

Back and chest protectors, hardened areas on gloves, ankle support systems on boots, and armor inserts in suits, jackets and pants make riders today much less prone to injury if they go down than they were in the 90s. And as a bonus, you don't even have to look like a power ranger any more to get these benefits!

The SV650 was the plain, easygoing girl in class that you knew you could count on for a good time. While the industry as a whole was ramping up the arms race of faster, lighter, more complicated motorcycles, Suzuki rolled out a simple little standard bike.

The SV650 wasn't fast, or loud, or exotic, or technologically advanced in any way. But it was affordable, approachable, easy to work on and ride, and had gobs of potential. It was capable of doing anything you asked it to do, from light adventure touring to track duty, with a minimum of configuration changes. For years, it was the de facto king of the bikes-for-new-riders category, spawned a rebirth of the naked standard category from Japanese manufacturers, and reinvigorated lightweight twins race classes across the US.

While the controversial 999 did achieve success in racing, winning world titles in 2003, 2004 and 2006, it was never really loved by the Ducatisti. The fairings were said to look too Japanese, it had a conventional swingarm, and it lacked the svelte, visceral attraction of the 916 series that proceeded it.

By 2007, even a heavily modified 999 was hopelessly outclassed by its competition, down as much as 20 hp to the 1000cc four-bangers. Ducati took all of that to heart when designing the 1098, returning to their roots and debuting a motorcycle that was fast, sleek, powerful, sexy, and undeniably a Ducati. The 1098's introduction coincided with Casey Stoner's domination of the 2007 MotoGP world championship to thrust the Italian marque to a level of contemporary popularity never before dreamed of in Bologna. WSBK titles followed for the 1098 in 2008 with Troy Bayliss and 2011 with Carlos Checa.

In terms of improving the riding public as a whole, this may be the most important development. Track time for motorcyclists had been limited for decades to those with ambitions to go racing. But starting in the early 2000s, a movement began to offer track time to everybody and any bike, provided they wore enough gear and taped off their lights first.

READ MORE: How To: Not Be a Noob at A Track Day

As the sportbike boom hit a fever pitch, so did the demand for track time, and track day organizations popped up all over the country. Today, in most areas of the country, you can find a track day within a few hours of your house just about every weekend, and go improve your skills in the relative safety of the controlled environment a race track provides.

What will be added to this list in the coming years? Will the Kawasaki H2 make the cut next year? We'll have to wait and see.