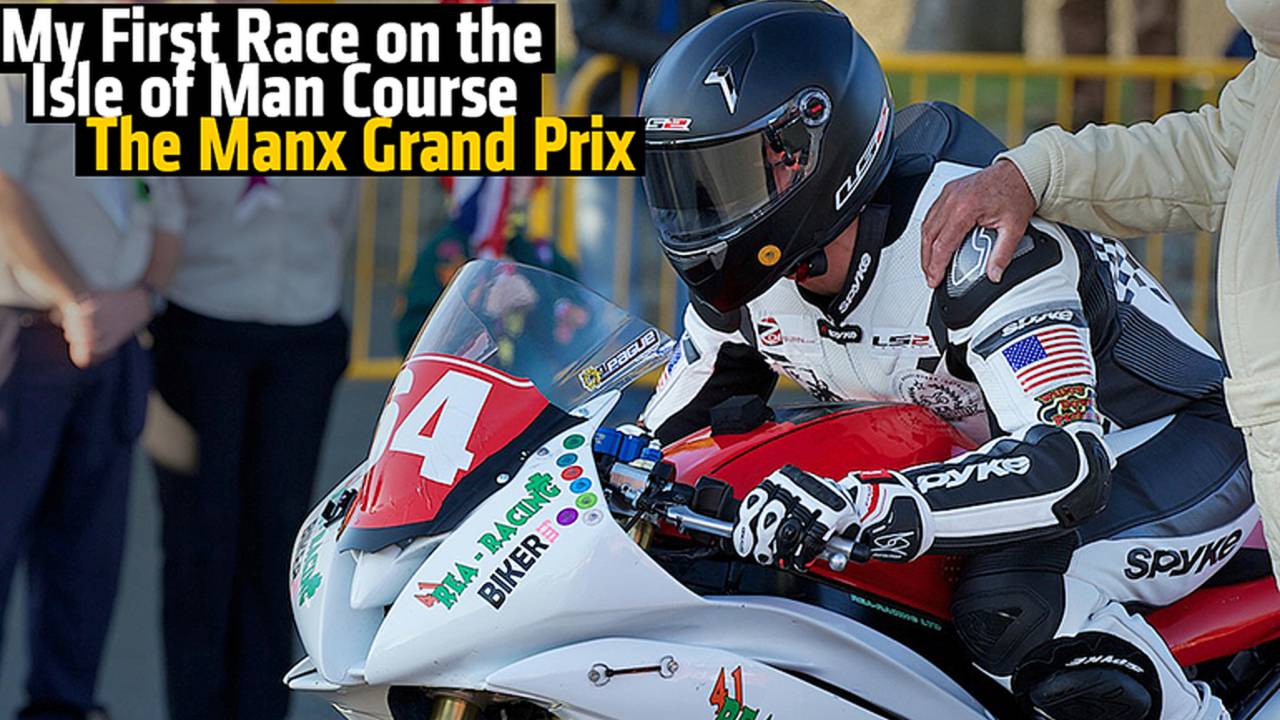 Racer Aaron League tells RideApart what it's like to ride the infamous Mountain Course at the 2014 Manx Grand Prix on the Isle of Man.

Racer Aaron League made a bit of history last month - the Charlotte, North Carolina-based rider became the youngest American to tackle the Manx Grand Prix, part of the annual Isle of Man Festival of Motorcycling. The race follows the Isle of Man TT Course - also known as the Mountain Course, it's one of the best-known courses in motorcycle racing, and the Manx Grand Prix has been a starting point for some of the world's best and best-known racers. Here's Aaron in his own words, telling us what was like to ride in that famous - some might say infamous - race.

Wow. Just wow. As I slowly came back up the return road after my first at-speed lap of the Mountain Course, I was a shaking, smiling, elated wreck. The course had some showers just as we were due to go out, and the severe lack of marshals meant the newcomers lap would be the only one run that night. Our group guide Rob Hodson made sure we knew what a spirited lap felt like; despite the involuntary death grip I imposed on my bike, I was ecstatic that I could always paint a mental picture of what the next corner looked like. It may sound simple, but getting that right on a course with 260+ turns is a huge first step.

Practice progressed well from the get-go. My first free practice on Monday allowed for two laps, but I pulled in after one- a 92mph average. The elevation change on the mountain meant that moisture became a huge problem, and I still hadn’t figured out a few visor tricks to negate the issue. I’ve always been hard on myself, and I was just not satisfied with a 92mph lap. The old saying on the island is ‘steady away’, which may not apply if you are a 129mph-lapping newcomer (Peter Hickman), but certainly lends itself a safe guideline to someone like me. Each day, I kept progressing- first a 92, then a 94, and by the third day I ran a 98 and a 100 in the same session! The ‘ton’, as some know it, is mostly a mental barrier. If you can get free track, hit your marks, and run safe lines, a 100mph lap is achievable. Once I had overcome that hurdle, I felt more capable of pushing myself and the bike.

Aaron does some pre-race stretching. Photo by Zoe Burn.

A slipping clutch plagued the next few days of practice, so I was only able to make it out for one flying lap before the Newcomer’s Race day arrived. The flying lap was a huge piece of the puzzle that I still hadn’t nailed. I may have only been on an 83hp SV650, but the difference between a standing start down Bray Hill and a 6th gear topped-out run down Bray Hill was something I still needed to grasp. By the way, no one really mentions Bray Hill when they talk about the course- It’s hard, really hard. As you are trying to thread the needle at 130mph, the bike is all over the place, trying to toss you out of the saddle. Then at the dip, you bottom out so hard that if you aren’t still steering the bike, it will throw you right into the hedges on the backside of Bray.

At the starting line, ready to race.

Newcomer’s race day was delayed one night due to severe weather, and shortened from four laps to three. I started off steady, having just installed a new clutch. Once up to speed, I fought through traffic to get clear road, and started hitting my marks. The first lap seemed to drag on, as I had to work to get past some of the smaller bikes and supertwins ahead of me. I pitted at the end of lap one, topped up the fuel, pulled a tear-off, then set back off down Bray Hill for two more. By the end of the second lap, I had worked my way up to 5th place, with a 19 second gap to a native Manxman in P4. I did my best to stay focused for the flying lap, and finished in P5 with a fastest lap of 104.9mph- a great leap from my first practice’s 92. Physically, the course is taxing, but road cycling had prepared me quite well for the nature of the course.

The very next day was the 4-lap supertwin race, in which highly-experienced competitors would join the newcomers to more than double the starting grid. I did not expect to win this race by any stretch - all I was going for was an improvement in lap time over what I had accomplished in the Newcomer’s race. I had a steady first two laps and a smooth pit stop. Lap 3 was filled with more traffic, and I just had to hang on and make safe overtaking moves. Lap 4 is where things got interesting. Coming up out of the 13th milestone leading into Kirk Michael, I was flat out in 6th gear. As I clicked down into 5th for the fast right-handed Douglas Road corner, the engine just died- no revs, no noise, nothing. It just stopped. With the rear locked up, all I could do was sit up and brake as much as possible before the wall. I hit the curb (and luckily a padded fence) at about 40mph, still enough to throw me off the bike pretty hard, but I escaped with just a jammed thumb. I consider myself extremely lucky to get out of that wreck with as little injury as I did. Had that occurred anywhere else, I would have been face-first in a storefront. Not all takeaways from the race were negative, however, as I managed to increase my best lap time to a 105.4, achieving what I set out to do that day - improve my speed.

That’s one thing I cannot stress highly enough - when you race on the mountain course, all you can do is better than you did before. It’s a simplistic thought, but if you start setting finishing positions as goals on a course that demands your attention at ever second, you can get caught up in racing others and not racing yourself. At the end of the day, it’s a time trial - you are only ever racing the person behind the bubble. It’s not important to pass someone for position, but rather to steadily advance your braking markers, work up to holding the throttle wide open, and selecting smooth lines.

Thanks are in order to RideApart for sharing my story and experience with your readers. I would like to take a minute to thank my sponsors, without whom none of this or any of my aspirations would be possible. First off, a huge thank you to Zoë Burn for all her PR, marketing, and sponsorship support. Cheers to Spyke Leathers, LS2 Helmets, Falco Boots, Cornerspin & Cornerspeed, Cycle Gear, and SR Sign Design.

Aaron League has been racing since 2012. To keep up with his racing endeavors and campaign of the 2015 Pirelli National Superstock 600 support series of the British Superbike Championship, follow him on his website and social media: